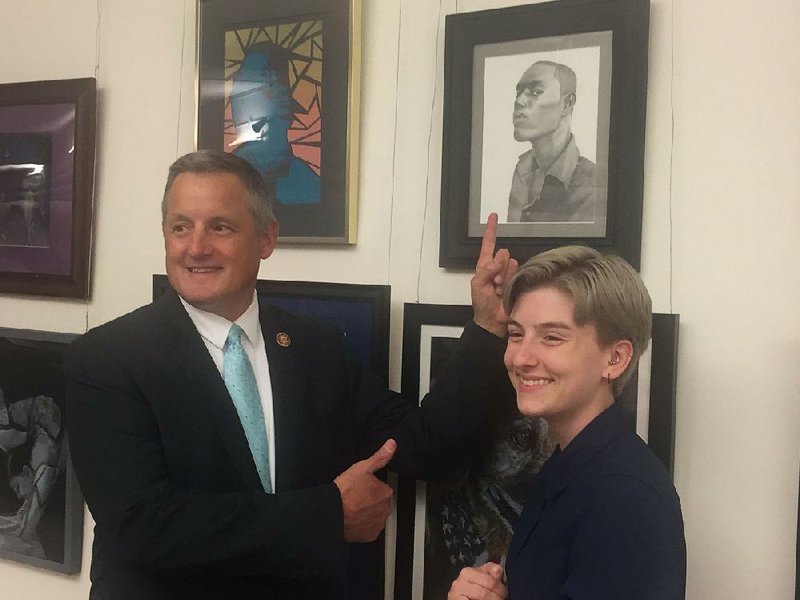 U.S. Rep. Bruce Westerman points out Tracy Gwinn’s winning artwork, Portrait 2, on June 24. Tracy (right), a recent graduate of the Arkansas School for Mathematics, Science and the Arts, was the winning artist in Westerman’s district and her artwork will hang this year in the tunnel connecting House office buildings to the U.S. Capitol.

Their creations, along with pieces by hundreds of other creative teenagers, will remain on display for the next year.

U.S. Rep. French Hill, a Republican from Little Rock who represents the 2nd Congressional District, was co-chairman of the 2019 Congressional Art Competition.

Each of the House's 435 members, along with representatives of U.S. territories, possessions and the District of Columbia, can select one student for the honor.

This year, 431 of the offices participated.

Lawmakers will stream past the art every time there's a vote. Hundreds of thousands of tourists also will catch glimpses of the works in the coming months.

Last week, winning artists from across the country were welcomed to the Capitol.

Tracy Gwinn, a 2019 graduate of the Arkansas School for Mathematics, Sciences and the Arts, took top prize in the state's 4th Congressional District, which includes southwest Arkansas plus a slice of lightly populated territory above Interstate 40.

She'd topped more than 200 other entrants from 16 schools in the district, he said.

The caliber of entries was impressive, the Republican from Hot Springs said. "I'm glad I get other people to judge it because I don't know if I could ever pick a winner. We get so many great pieces that come in," he said.

After taking in some of the other students' work, Gwinn gave the exhibit positive reviews.

"It's absolutely amazing," she said. "I'm really impressed with all this stuff."

The art is grouped alphabetically by state, with Arkansas near the entranceway to the Capitol building.

Her drawing, titled Foreshortened Self-Portrait, was selected by a team of judges that included a museum curator, an art professor, a university administrator and a member of the British parliament.

Winning a trip to Washington was a real treat, she said.

"I was super surprised but I'm also very happy to be here," Bat-Ulzii said. "I didn't expect any of this to happen."

Jaden Hendrix, a student at Cabot High School, claimed first place in the 1st District, which contains northeastern Arkansas plus a strip of Mississippi River Delta counties that stretches to the Louisiana state line.

The district is represented by U.S. Rep. Rick Crawford, a Republican from Jonesboro.

In the 3rd District, which includes nearly all of Northwest Arkansas, recent Siloam Springs High School graduate Ethan Andrus won with his screenprint titled One Night.

The Congressional Institute, a nonprofit group "dedicated to helping Members of Congress better serve their constituents," sponsors the contest.

Most of the winners are high school students, although younger entrants occasionally get the prize.

Since the art competition was launched in 1982, more than 700,000 students have submitted artwork for the display, organizers say.

The artwork runs the gamut, from abstract art and sketches of celebrities to portraits of family members with patriotic themes.

Under the House's rules, "exhibits depicting subjects of contemporary political controversy or a sensationalistic or gruesome nature are not allowed."

Winning students are offered scholarships to the Savannah College of Art and Design. Southwest Airlines provides them with free flights to Washington, D.C.; one parent or guardian is allowed to accompany each student at no charge.

At a ceremony June 24, the winners were asked to raise their hand if this was their first trip to the nation's capital. Many indicated it was.

The response was greeted with enthusiasm by Hill.

The U.S. Capitol is more than a building; it's also a repository for some of the nation's greatest artistic treasures, he said.

"You'll think back on this in the years ahead as your first exposure to one of the most impressive art museums in the world: Our U.S. Capitol," he said.

While the old masterpieces are impressive, the student submissions are also cause for optimism, Hill told a reporter afterward.

"It's just always inspiring and comforting that the future is assured because we've got that kind of talent coming behind us," he added.