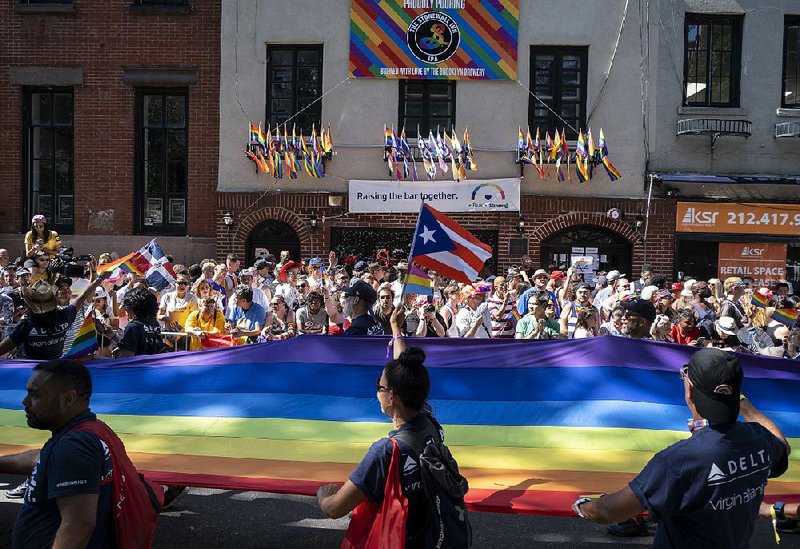 A group marching in New York’s pride parade carries a rainbow banner Sunday as it passes the Stonewall Inn, the site of a 1969 police raid that sparked the gay-rights movement.

NEW YORK -- Exuberant crowds bearing rainbow colors filled New York City streets Sunday for one of the largest pride parades in the history of the gay-rights movement, marking the 50th anniversary of the police raid on the Stonewall Inn.

Marchers and onlookers took over much of midtown Manhattan with a procession that lasted hours and paid tribute to the uprising that began at the tavern when patrons resisted officers on June 28, 1969. The parades in New York and elsewhere concluded a month of events marking the anniversary.

Many of those who attended the New York event said the Pride March -- a celebration of lesbian, gay, bisexual, transgender and queer identity -- comes at a pivotal moment, when more gay rights have been affirmed than ever before but when LGBTQ issues remain a subject of debate.

On Sunday, attendees noted 50 years of laws and changing attitudes that moved gay men, lesbians and transgender people into the mainstream.

"Fifty years ago, this is where the revolution began," said Tiffany Fantasia, a drag queen from Miami. "Fifty years ago was when we decided enough is enough."

"It's beautiful to see something like this happen, especially at a time like this and where our country is at politically," said Joanna Fanizza, who watched the march with her friend Nitya Vink.

Eraina Clay, 63, of suburban New Rochelle, N.Y., was there to celebrate a half-century of fighting for equality.

"I think that we should be able to say we've been here for so long, and so many people are gay that everybody should be able to have the chance to enjoy their lives and be who they are," Clay said. "I have a family. I raised kids. I'm just like everybody else."

"We've come so far in the past 20 years," added Gary Piper, 55, who arrived from Kansas to celebrate with his partner. "I remember friends who would be snatched off the streets in Texas for dressing in drag. They'd have to worry about being persecuted for their identity.

"But now we're so much more accepted. I'm not saying we don't have a ways to go, but let's celebrate how far we've come."

Alyssa Christianson, 29, of New York City said she was concerned that the movement could suffer setbacks during President Donald Trump's administration.

"I'm definitely a little scared of how things are going, just the anger and violence that comes out of it and just the tone of conversation about it," Christianson said. "We've come so far, especially in the last few decades, that I don't want to see that repressed in any way."

Trump in May tweeted about Pride Month and praised the "outstanding contributions" of the gay and transgender communities. However, his administration has moved to revoke health care protections for transgender people, restrict their presence in the military and withdraw federal guidance that transgender students should be able to use bathrooms of their choice.

The administration has also aligned with some religious conservatives in arguing that nondiscrimination protections for gay and transgender people can infringe on the religious beliefs of others who oppose same-sex marriage and transgender rights.

But for New York politicians, predominantly Democrats, the Pride March has become a required stop. Gov. Andrew Cuomo marched in the parade, and he also announced he had signed a bill to ban defense lawyers in murder cases from using "gay panic" or "transgender panic" strategies in state courts. Defendants accused of killing gay or transgender people have sometimes asserted temporary insanity, maintaining that their actions were justified by the victim's sexual orientation or gender identity.

Other Stonewall commemorations in New York included rallies, parties, film showings and a human-rights conference. The celebration coincides with WorldPride, an international LGBTQ event that started in Rome in 2000 and was held in New York this year.

Scheduling WorldPride for New York was a first. The event had never before taken place in the United States.

In Illinois, Gov. J.B. Pritzker chose the parade day to sign an executive order creating a task force to study the rights of transgender students. The task force will look at what schools are doing to promote LGBTQ rights to make sure students have "welcoming" and "inclusive" environments.

In Chicago's parade, the city's first openly gay mayor, Lori Lightfoot, was one of seven grand marshals. Lightfoot, who took office in May, walked alongside her wife and wore a "Chicago Proud" T-shirt with rainbow lettering. The couple held hands at times, drawing cheers from onlookers.

The procession was cut short as thunderstorms rolled through the area, forcing police to cancel the event about three hours after it began.

In San Francisco, a contingent of Google employees petitioned the pride parade's board of directors to revoke Google's sponsorship over what they called harassment and hate speech directed at LGBTQ people on YouTube and other Google platforms.

San Francisco Pride declined to revoke the sponsorship or remove the company from the parade, but officials said the Google critics could protest the company's policies as part of the parade's "resistance contingent."

The San Francisco parade was stopped for nearly an hour when demonstrators linked arms in the street to protest the police presence.

About 40 people temporarily halted the parade, and two people were arrested, the San Francisco Chronicle reported.

In Turkey, police dispersed the crowd at a pride event in Istanbul that Turkish authorities had banned for the fifth year.

The rally on a side street to Istanbul's main pedestrian avenue drew several hundred people who cheered and waved rainbow flags. Istanbul Pride organizers said the Istanbul governor's office banned people from rallying in the central Taksim district as well as in a square designated for demonstrations west of the city.

Police allowed representatives to make a short statement to the media before officers dispersed the crowd with tear gas. Police dogs were also at the scene.

The Istanbul Pride group said it would continue activism to get sexual orientation and gender identity recognized in Turkish laws. Though homosexuality has been legal in Turkey for decades, rights groups say discrimination is widespread.

The new mayor of Istanbul told a group of international journalists on Friday that any group should be free to demonstrate as long as protests do not disturb the peace. Ekrem Imamoglu, a member of a party in opposition to Turkish President Recep Tayyip Erdogan, said he'd discuss the reasons for the ban with relevant authorities.

Information for this article was contributed by Sabrina Caserta, Rebecca Gibian and staff members of The Associated Press; and by James Barron of The New York Times. 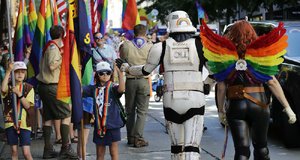 Photo by AP/ELAINE THOMPSON
Cub Scout Kyla Slivers, the first girl in her Pack 80 den, gets a high five from a Star Wars character Sunday before marching in the 45th annual Seattle Pride Parade with other Scouts.