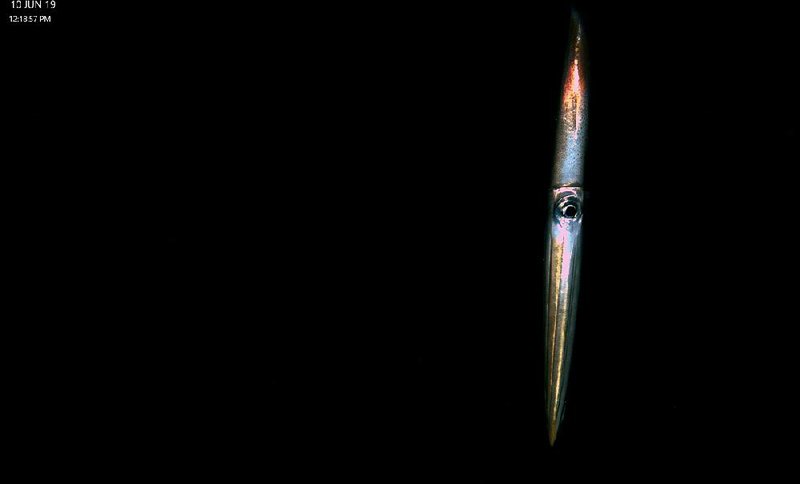 A squid was photographed June 11 at 3,610 feet in the Gulf of Mexico by The Medusa apparatus launched by scientists aboard the Point Sur.

In the pitch black waters almost 2,500 feet below the surface of the Gulf of Mexico, a thin, undulating arm emerges from the gloom.

Suddenly, it splits, and what was before a lone, curious appendage is now a writhing bouquet of tentacles until, finally, an honest-to-goodness giant squid blooms from the darkness and attacks.

And then, as abruptly as it emerged, the beast vanishes back into the deep.

A live giant squid had been filmed in U.S. waters for the first time. The video was captured by a team of researchers on an expedition funded by the National Oceanic and Atmospheric Administration, who were studying the effects of light-deprivation on deep sea creatures living in the "midnight zone," 3,280 feet below the surface.

To capture the image to the world, the 23-person crew used a specialized probe, got lucky enough to lure the elusive squid to a camera and found it among hours and hours of video footage. The downloaded video then had to survive a lightning strike that threatened scientists' computers aboard the metal research vessel and, on top of everything else, a water spout that formed suddenly off the port bow.

Edith Widder, one of the leaders of the expedition, described the ordeal as "one of the more amazing days at sea I've ever had."

Speaking June 23 from the dock where the Point Sur research vessel had just docked after two weeks at sea, Widder, founder of the Ocean Research & Conservation Association, recounted the dramatic events surrounding the latest discovery.

Scientists had used a camera system developed by Widder called The Medusa, which uses red light undetectable to deep sea creatures and has allowed scientists to discover new species and observe other elusive ones. The probe was outfitted with a fake jellyfish that mimicked the invertebrates' bioluminescent defense mechanism, which can signal to larger predators that a meal is nearby, to lure the squid and other animals to the camera.

And with days to go until the end of the two-week expedition, 100 miles southeast of New Orleans, a giant squid took the bait.

June 19, as a squall raged over the Gulf, Widder was in the ship's mess waiting for videos from The Medusa to process when her colleague Nathan J. Robinson, director of the Cape Eleuthera Institute, came barging in.

"His eyes were just about popping out of his head," Widder said. "He didn't even say anything, and I knew immediately he had seen something amazing on the video.

"We were all yelling, and other people start running into the lab and we're trying hard not to get excited. In science you have to be careful not to fool yourself," she said. But it was difficult not to get excited about what they saw in the video. It sure looked like a giant squid, but the storm made it difficult to reach an expert at the Smithsonian who could properly identify the creature.

And then, because things weren't dramatic enough already, the ship was struck by lightning.

Widder heard a boom and ran outside to see a plume of yellow and brown smoke. Debris was strewn about the deck. She and her colleagues immediately feared for the computers carrying the precious footage.

"We rushed into the lab to make sure that the most amazing video that we've all ever seen was still OK, which it was," Widder said. A couple of hours later, she said, their captain informed them that a water spout, a weather formation akin to a tornado, was forming nearby.

But in the end, it was all fine. Michael Vecchione, a zoologist at the NOAA's National Systematics Laboratory was able to confirm remotely that they had, indeed, captured images of the elusive giant squid. The researchers estimated it was at least 10 to 12 feet long.

Even without lightning strikes and open-water tornadoes, filming a giant squid in its natural habitat is extremely difficult -- so difficult, in fact, that nobody had managed it until 2012, when Widder and her colleagues on a mission off the coast of Japan used The Medusa to capture the first-ever videos of giant squid in their deep sea home.

In 2004, Japanese scientists were able to take the first pictures of a giant squid and collect a portion of tentacle from a live animal. But historically, much of what scientists knew about giant squid came from dead specimens that had washed ashore or had been recovered from the bellies of sperm whales, Smithsonian Magazine reported.

Their immense size, alien features and elusive behavior have earned the giant squid a legendary status among marine life.

"It's got eight writhing arms and two slashing tentacles," Widder said. "It has the largest eye of any animal we know of, it's got a beak that can rip flesh. It has a jet propulsion system that can go backwards and forwards, blue blood, and three hearts. It's an amazing, amazing life form we know almost nothing about."

Squid have served as the basis for the legendary Kraken, and its reputation as a monster was bolstered by appearances in Jules Verne's Twenty Thousand Leagues Under The Sea as well as Herman Melville's Moby-Dick, which perhaps contains the best description of its place in the public imagination:

"We now gazed at the most wondrous phenomenon which the secret seas have hitherto revealed to mankind. A vast pulpy mass, furlongs in length and breadth, of a glancing cream-color, lay floating on the water, innumerable long arms radiating from its centre, and curling and twisting like a nest of anacondas, as if blindly to catch at any hapless object within reach. No perceptible face or front did it have; no conceivable token of either sensation or instinct; but undulated there on the billows, an unearthly, formless, chance-like apparition of life. ...

"Whatever superstitions the sperm whalemen in general have connected with the sight of this object, certain it is, that a glimpse of it being so very unusual, that circumstance has gone far to invest it with portentousness. So rarely is it beheld, that though one and all of them declare it to be the largest animated thing in the ocean, yet very few of them have any but the most vague ideas concerning its true nature and form."

While modern technology has allowed scientists to get a better glimpse of the giant squid than the doomed souls of the Pequod, the dramatic circumstances of this new discovery feel fitting, considering the creature's mythical lineage.

Widder and her colleagues, including Robinson and Sonke Johnsen, a biology professor at Duke University, hope that discoveries like theirs will continue to capture the public imagination and help spur support for oceanic research.

"What were once monsters to be feared are now curious and magnificent creatures that delight," Johnsen and Widder wrote on the NOAA's expedition blog. "We like to feel that science and exploration has brought about this change, making the world less scary and more wondrous with each new thing we learn." 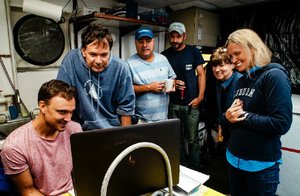 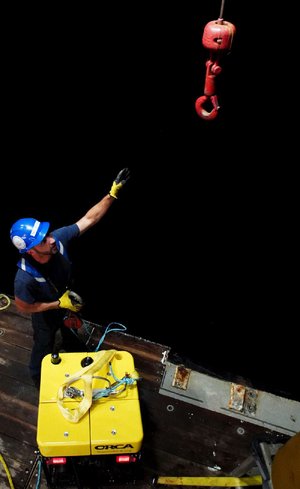 Photo by NOAA Office of Ocean Exploration and Research
Capt. Nick Allen recovers the Medusa camera apparatus at night June 21 aboard the re- search vessel Point Sur in the Gulf of Mexico.