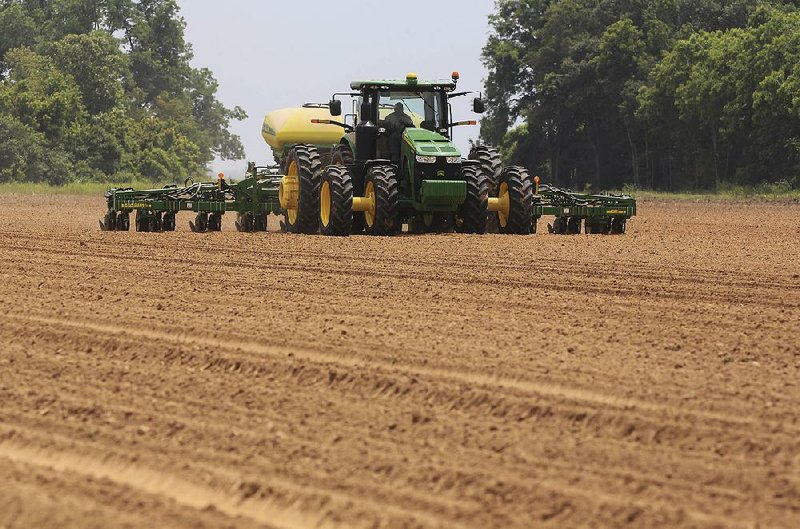 In this file photo soybeans are planted in Jefferson County.

Arkansas farmers have received nearly $281 million in government payments to make up for losses suffered during the ongoing trade war with China, according to federal records.

Twelve Arkansas farmers or farming entities received $500,000 or more, according to data compiled by the Environmental Working Group, a Washington nonprofit, after it filed a Freedom of Information Act request with the U.S. Department of Agriculture. More than 100 Arkansas farming operations received at least $250,000 under the USDA's Market Facilitation Program.

About 300 received payments ranging from $125,000 to $249,999, according to the Environmental Working Group's data of payments through the end of April.

Fourteen Arkansas farming entities rank in the top 100 recipients nationwide in tariff-relief payments, according to the data.

As of June 17, payments to Arkansas farmers totaled $280.9 million, according to the state office of the Farm Service Agency, a USDA branch helping administer the aid program.

Last August, when the USDA announced the startup of the $12 billion Market Facilitation Program, the agency alluded to a cap of $125,000. "MFP payments are also capped per person or legal entity at a combined $125,000 for corn, cotton, sorghum, soybeans and wheat," the USDA said in its Aug. 27 news release. Similar caps were set for dairy and swine payments. 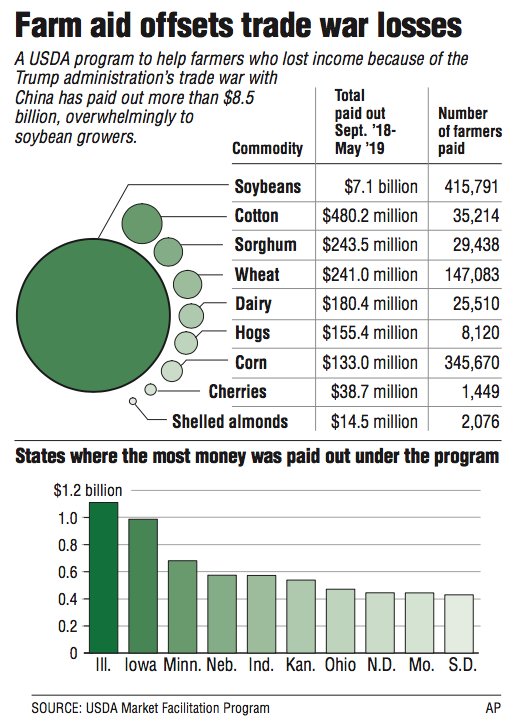 Soybean payments in Arkansas so far total $247.7 million, according to the Farm Service Agency in Arkansas. Payments for cotton are at $30.7 million.

The largest payment in Arkansas, of $744,169, was made to TMG Farms of Wabash in Phillips County. TMG, according to USDA records, had received just shy of $700,000 for the tariffs' effect on cotton sales. The farm received another $44,048 for soybean losses and $438 for corn losses.

Tariff relief consisted of $4.7 billion in an initial first round of direct payments to producers of soybeans, cotton, corn, sorghum, wheat, pork and dairy, based on actual 2018 yields. The soybean payments were set at $1.65 a bushel. Prices for the other crops and commodities were set at far lower per-unit levels, such as corn at 1 cent per bushel.

Soybean farmers have especially been hit hard in the United States' trade dispute with China, which placed high tariffs on its importation of American soybeans and all but quit buying a commodity that is used mainly as feed for its burgeoning swine industry.

The $1.65-a-bushel rate was seen by the government as a reflection of what the Chinese tariffs cost U.S. soybean farmers in sales, but it doesn't cover losses of as much as 85 cents a bushel brought on by other factors, said H. Scott Stiles, an economist with the University of Arkansas Cooperative Extension Service who is based at Arkansas State University.

Record-setting yields in the U.S. and Brazil have resulted in a large surplus of soybeans, bringing down market prices, Stiles said. "Just a lot of things came together," he said.

The tariff-relief program didn't take into account those losses or the financial costs of "regional issues" such as a rain-delayed harvest in Arkansas that damaged a lot of farmers' late-planted soybeans, Stiles said.

Damaged or discolored soybeans get per-bushel discounts, or penalties, at grain elevators. "The worst case I heard was $3 a bushel," Stiles said, referring to the discounted beans.

Sarah Graddy, a spokesman for the Environmental Working Group, said the tariff-relief program and other subsidy programs benefit the largest, wealthiest farms in America. "This is not a safety net to save family farms," she said.

Graddy also said the tariff-relief program is a political solution to a problem created by President Donald Trump's administration. "He's throwing taxpayers' dollars at a problem he created with tariffs and the trade war with China," she said. "This is not a program aimed at protecting small farms from losses or from going out of business."

The aid program included another $1.2 billion in commodity purchases, mainly of fruits, nuts and vegetables for distribution to food banks, and $200 million in promoting international trade.

In late May, the Trump administration unveiled a second round of aid for farmers, this time for $16 billion. Direct payments will total $14.5 billion.

The aid to food banks and similar organizations will amount to $1.4 billion. Trade promotions will get another $100 million.

The amount "is in line with the estimated impacts of unjustified retaliatory tariffs on U.S. agricultural goods and other trade disruptions," the USDA said.

USDA data provided to the AP through May 31 show that nearly 578,000 Market Facilitation Program applicants had received aid payments, with 83% of the dollars -- $7.1 billion -- going to soybean producers. The second-most-subsidized commodity under the program was cotton, nearly 6% of the total at $480.2 million.