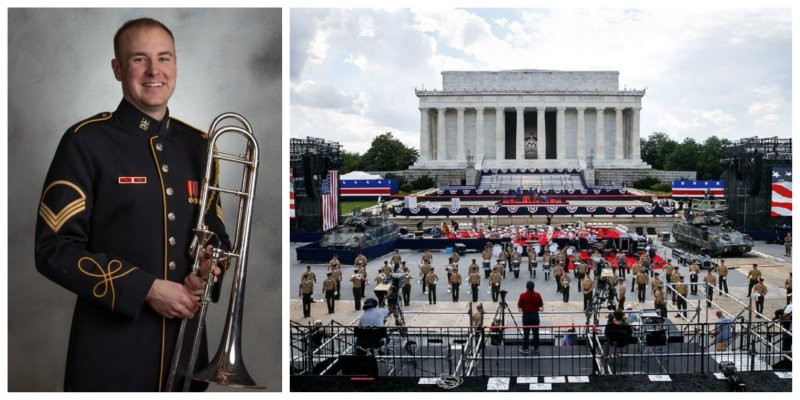 Staff Sgt. Austin Westjohn, left, joined the U.S. Army Band in 2018. The band is to perform today on the lawn of the U.S. Capitol as part of the nation’s Fourth of July celebration. At right, set-up and rehearsals continue Wednesday around the Lincoln Memorial.

WASHINGTON -- Millions of Americans have served their country by taking up arms, but Staff Sgt. Austin Westjohn does it by wielding a trombone.

Tonight, before the Independence Day fireworks finish lighting up the U.S. capital sky, the 24-year-old Conway native will play patriotic music on the West Lawn of the U.S. Capitol.

He'll be joined by others from the U.S. Army Band, including two fellow Arkansans: Staff Sgt. J. Martin "Marty" Bishop, a trumpet player and Jonesboro native, and Master Sgt. Stacie Thompson, a clarinetist originally from Springdale.

Tonight's televised performance will be seen by hundreds of thousands of Capitol Hill concertgoers and by millions more, according to officials with PBS, which is to air the program live from 7-8:30 p.m.

A fourth band member from Arkansas, Sgt. 1st Class Shawn Hagen, will be heard but not seen when the band begins to play.

The French horn virtuoso, originally from Paragould, has the day off and will spend the evening watching fireworks with his son. But he performed with the band earlier this week during a taped rehearsal. That recording will be used to help supplement the sound of tonight's live performance, band officials said.

But for Westjohn, who joined the band less than a year ago, this will be his first appearance. His parents, Scott and Amy Westjohn, have traveled to the capital to see it.

"It's just thrilling for us to see him perform this service for our country and at this level," Scott Westjohn said after attending Tuesday's practice session. "He had a passion at an early age for his instrument and for music, and what we're seeing today is just a culmination of that."

The U.S. Army Band, sometimes referred to as "Pershing's Own" is the "premier musical organization of the United States Army," according to the organization's website.

It was started in 1922 at the behest of General of the Armies John J. "Black Jack" Pershing. The commander of the American Expeditionary Forces during World War I, Pershing wanted his forces to have a musical corps on par with the military bands he'd encountered in Europe.

Nearly a century later, the U.S. Army Band is one of the most exclusive musical assignments in the United States, playing for presidents and heads of state.

The White House is its frequent destination.

Openings are rare and competition is fierce, according to Master Sgt. Chris Branagan, the band's public relations manager and one of the military's finest trombonists.

"The job is rewarding, and it's a great place to work. And typically, once people get here, they tend to stay their whole careers here. The trombonist that I replaced was here 29 years," he said.

"We recently had a trumpet audition here that took place over two days because we had more than 100 people come and play," he said.

Last year, while studying at Baylor University, Westjohn heard about an opening with the U.S. Army Band and decided to apply. He was not in the Army at the time.

According to the band's website, usarmyband.com, a civilian who is offered a position with the band must also join the Army, including going through basic training.

Personnel are promoted to the rank of staff sergeant upon completion of four months of active-duty service and receive full military benefits. The annual starting salary for a staff sergeant is $61,557 without dependents and $67,461 with dependents.

"I was in my second year of graduate school. I had just gotten married. So getting a job was very much on my radar," he said. "Anything serious that opened up, I was considering taking."

Offered the position, he quickly accepted. Soon, he and his wife, Savanna, were headed East.

The band was called upon to perform hymns as the 41st president's casket was carried into the Capitol rotunda.

All 99 band members were summoned for service.

Twice, thus far, he's performed at the White House, playing the trombone on the Truman Balcony when foreign ambassadors are calling.

He's scheduled to play there again on Monday.

At age 24, he's one of the youngest members of the band.

A 2012 graduate of Conway High School, he went on to earn a bachelor's degree from Harding University before obtaining a master's degree from Baylor.

Along the way, he played with several musical outlets, including the Little Rock Wind Symphony and the Hot Springs Music Festival orchestra.

As a boy, Westjohn didn't have to be coaxed to practice, his parents said.

"He was just very competitive," Amy Westjohn said. "He wanted to be the best, and he just practiced all the time. He would just walk around the house, just practicing over and over and over."

That didn't change after he went off to college, Savanna Westjohn said.

And it hasn't changed now that he's living in the Washington suburbs.

After he completes his day's work, he's often eager to keep playing, she said.

"He goes down to the parking garage to practice," she said. "He's met everybody in our apartment building because everybody knows the resident trombone player."

Three levels below ground, the structure acts as a concrete buffer.

But the notes sometimes waft up anyway.

"You can hear it up the elevator shaft. That's how I know he's home sometimes," she added.