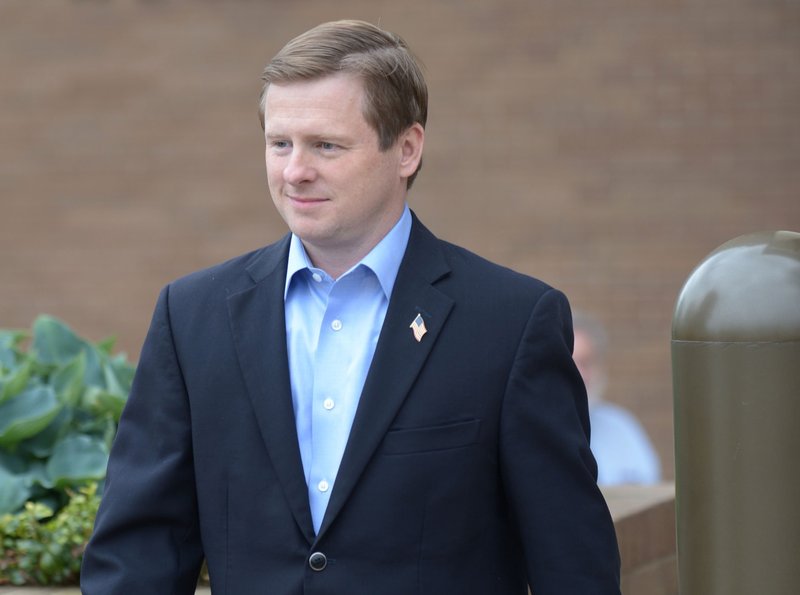 The conviction of Randell Shelton Jr. involving kickbacks from state grants to Ecclesia College should be overturned and the charges dropped, according to a brief filed Wednesday by the National Association of Criminal Defense Lawyers.

The brief cites "outrageous" conduct by an FBI investigator.

"If this case does not define the outer boundaries of what constitutes outrageous or intolerable government conduct, then there is no case which may do so," says the brief, filed by attorney and association member Justin Johnson of Kansas City, Mo.

Shelton of Kemp, Texas, was convicted of 12 fraud-related counts in the same trial as former state Sen. Jon Woods, R-Springdale. Woods also was convicted of one count of money laundering and two additional counts of fraud. Both appealed to the 8th U.S. Circuit Court of Appeals on the same grounds but the association's brief was filed only in Shelton's case.

Neither the U.S. attorney for the Western District of Arkansas nor the trial judge in the case will comment on pending appeals, spokesmen for both said. Also, the 8th Circuit has not ruled yet on whether it will accept the national association's brief and its request to intervene in the case.

Woods and Shelton were convicted by a jury in U.S. District Court in Fayetteville on May 3, 2018. Woods and co-conspirator Micah Neal of Springdale, who was a state representative before pleading guilty in 2017, steered state grants to Ecclesia College in Springdale in 2013 and 2014. The college's president at the time, Oren Paris III of Springdale, pleaded guilty in the scheme to one conspiracy count.

Paris had hired Shelton as a consultant. Shelton passed a portion of those consulting fees along to Woods and Neal as kickbacks.

Paris reserved his right to appeal on the basis of FBI misconduct. His appeal also is pending before the 8th Circuit. Woods is serving an 18-year federal prison sentence. Shelton is serving a six-year sentence. Paris is serving three years. Neal was sentenced to one year of house arrest on one count of conspiracy.

Before Woods and Shelton's trial, FBI Special Agent Robert Cessario of Bentonville was ordered Nov. 30, 2017, to hand over a laptop computer that he used in the case to a forensic examiner in Little Rock. The order came after defense attorneys discovered that the agent did not pass along all of the electronic files requested by the defense. Specifically, Cessario did not forward all of the audio files Neal recorded in secret.

Cessario took the laptop to a computer shop in Bentonville and had its hard drive erased, according to court testimony by a technician at the computer shop and by Cessario. Then Cessario wiped the hard drive again himself before turning the device over Dec. 7, 2017, he said in court testimony. Cessario said in court that his purpose was to preserve private medical records he had downloaded. The court ruled that reasoning was not credible.

Cessario's conduct in the corruption case and the trial court's subsequent decision not to dismiss the case because of that conduct "strikes at the heart of the due process guarantee and the fairness of the justice system," the brief says.

Johnson filed the amicus curiae, or "friend of the court" brief on behalf of the association. The nonprofit group advocates for the rights of the accused.

"Agent Cessario testified that he knew he might face consequences for obstructing justice for his decision to wipe the laptop hard drive," Wednesday's brief says, citing the district court's pretrial hearing records. Yet U.S. District Judge Timothy Brooks of Fayetteville rejected a defense motion to dismiss the case.

Brooks ruled that there was no definite degree of proof that Cessario intended to harm the defendants' case, court records show. For instance, Cessario might have wiped the laptop to conceal unrelated misconduct of his own, Brooks ruled.

Brooks' ruling put the defendants in the position of being unable to prove that the deliberately destroyed contents of the hard drive would have mattered in their case, Wednesday's brief argues. The act of destroying the hard drive's contents is proof enough that the contents were of value to the defense, the brief argues.

The brief cites the 1988 U.S. Supreme Court case of Arizona v. Youngblood. In that case, the brief argues, "the Supreme Court essentially recognized that destroying 'potentially useful evidence'" is an admission that the evidence would probably help the defense. Otherwise, authorities would not want to lose it.

Cessario's conduct is still under investigation by the FBI's Office of Inspector General, bureau records show.

Jon Woods: Serving an 18-year sentence in federal prison in Fort Worth, Texas