MOVIE REVIEW: 'Spider-Man: Far From Home' shows us superheroes can be human, too

Lately, Columbia has been relying on Spider-Man the way the Yankees used to rely on Babe Ruth. It may be redundant, but that's what you do when your cleanup batter keeps knocking out homers. Spider-Man: Homecoming and Spider-Man: Into the Spider-Verse were clever, imaginative films that just happened to feature the Wall Crawler.

While we may eventually recover from Spider-Man 3 and The Amazing Spider-Man 2, it's worth noting that Spider-Man is a far more adaptable and even relatable hero than, say, Superman. It's easy to look up to Supes, but seeing eye-to-eye with a guy with X-ray vision is tough.

Peter Parker (Tom Holland), however, is a typically insecure, if earnest and unusually intelligent lad whose teen angst is just as crippling as his battles with Vulture. While Father Time guarantees any actor who takes on the role will have a short run, Spider-Man is simply a juicier, more flexible role.

This may explain why Homecoming and Into the Spider-Verse are both entertaining despite their differences with tone and approach. Like those movies, Far From Home is essentially a teen comedy that occasionally relies on special effects. Curiously, the movie is at its most enjoyable when it forgets that it's about a superhero.

Peter is smitten by M.J. (Zendaya), whose sardonic wit occasionally intimidates him. With a forthcoming European trip, he hopes a rare item from Venice might be enough to impress her. While Peter's obsession may be the same as legions of other teen guys, he has to juggle his crush with the fact that he's a reluctant Avenger. He's worn out from defeating Thanos and would like to live as a high school student and a neighborhood crime fighter.

A bunch of destructive monsters called the Elementals are tearing up cities across the globe. Each represents the ancient elements of earth, air, fire and water. The last one poses an existential threat to a city based on canals.

Shield director Nick Fury (an appropriately cranky Samuel L. Jackson) is indifferent to Peter's desire for time off and hounds the lad into taking on the monsters. Fury is also working with Quentin Beck (Jake Gyllenhaal), a superhero from another dimension who seems especially good at neutralizing the monsters. Apparently, they've destroyed the earth where he resides, so he's trying to make up his failure by saving ours.

Peter feels inadequate because super strength and web shooters aren't a match for force fields and biologically generated laser blasts. On the plus side, the late Tony Stark has willed Peter a new weapons system called EDITH (you'll love what the acronym stands for).

The cataclysmic CGI battles seem a little humdrum because there have been so many of them lately, but having a water monster attack Venice is pretty delightful. Director Jon Watts is a veteran of The Onion News Network, and the most entertaining moments in Far From Home come from when he gives the Marvel Universe an Onion-inflected interpretation.

Seeing how finals-obsessed seniors would have reacted to the disappearance and reappearance of half the universe's population is side-splitting. And Zendaya's wise-cracking but sweet interpretation of M.J. is refreshing. Kirsten Dunst left some big shoes to fill, but you have to share Peter's love for an M.J. who is smart enough to figure out on her own what Peter does after or even during school.

As for Holland himself, he may have the definite take on the Webslinger. He can be insecure and courageous in the same moment. Because all of us feel overwhelmed at some point, it's a consistent treat to watch him rise to the challenges supervillains pose.

One mark of a good film is if the minor characters are engaging. Screenwriters Chris McKenna and Erik Sommers populate Venice, Prague, London and New York with dozens of likable folks who are worth rescuing. They also give Marvel Universe staple and Tony Stark associate Happy Hogan (Jon Favreau) his most moving scenes. Stan Lee gave the world of comics human emotions and neuroses, and these writers wisely follow in his footsteps. 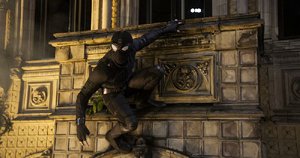 Spider-Man (Tom Holland) just wants to be a kid on vacation, but the Marvel Comic Universe (as usual) has other plans for him. 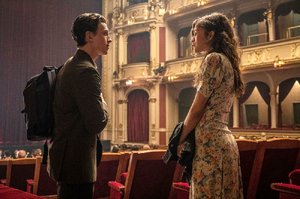 Peter Parker (Tom Holland) and M.J. (Zendaya) share a platonic moment during a school trip in Spider-Man: Far From Home.

Print Headline: MOVIE REVIEW: 'Spider-Man: Far From Home' shows us superheroes can be human, too