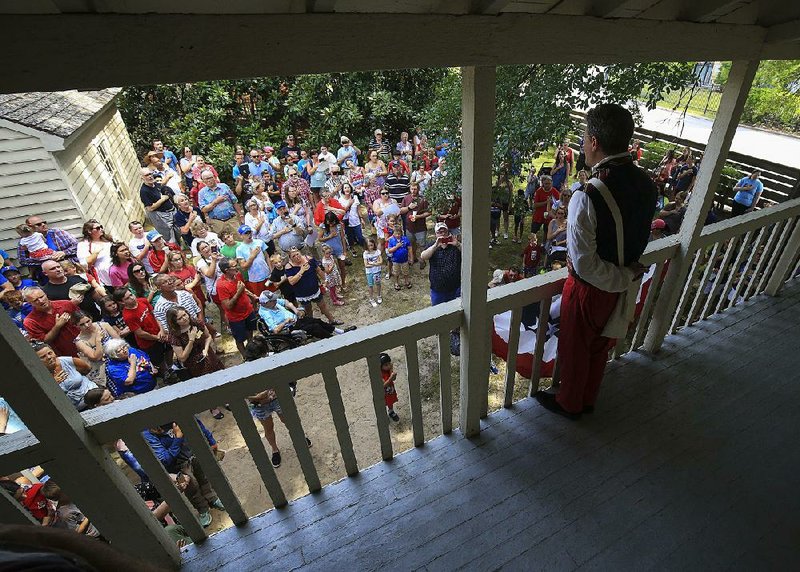 Keith Moore leads the crowd in singing “The Star-Spangled Banner” on Thursday during the Frontier Fourth of July event at the Historic Arkansas Museum in Little Rock.

If you heard a series of loud booms from downtown Little Rock on Thursday morning, blame the redcoats.

Six soldiers in red jackets and black tri-cornered hats lined up on a green lawn on Second Street, across from a row of scrappy, khaki-clad colonial fighters. At the first blast of gunfire -- a puff of white smoke, no bullets from these rifles -- a crowd of onlookers tensed up.

In among white tents and some wooden buildings that date back to before Arkansas was a state, re-enactors brought to life one of the battles that helped win America's independence. People cheered Saturday when one of the "British soldiers" fell to the ground.

Though the Historic Arkansas Museum aims to transport people back hundreds of years, the crowd already knew who won this battle.

Each year, the downtown museum hosts a Frontier Fourth of July. The event gives people the opportunity to explore the grounds, which feature buildings from the territorial and antebellum eras, free of charge.

Swannee Bennett, museum director and chief curator, said the grounds hold the largest collection of pre-Civil War buildings found anywhere in Arkansas, some dating to when Arkansas was still called the "western country."

"We're delighted to bring that history to life every day of the year," Bennett said.

Though no Revolutionary War battles were fought in Little Rock, performers and interpreters helped the public celebrate Independence Day by watching and participating in a variety of activities from decades past.

On the grounds of the museum at Third and Scott streets, families tried their hands at a wooden tabletop game and wobbled across the green on stilts. In one of the buildings, children sat rapt on wooden benches watching a blacksmithing demonstration. Men dressed as stone-faced British officers posed for photos with wide-eyed youngsters.

"Weren't the redcoats the bad guys?" one boy asked.

"Not if you're British," one of the re-enactors replied.

He said the drill wasn't perfectly accurate because "you wouldn't do that with kids that young," but walking kids through the steps and chants is one way to teach them about teamwork, as well as history. It helps them imagine what their lives would have been like if they had been born two centuries earlier, he said.

Tidwell said it's important to give young people a historical perspective to help them understand the world today.

"America's not perfect. We're learning to be more than we are as we go," he said.

Thursday's event also featured U.S. Rep. French Hill, a Republican from Little Rock, reading the Declaration of Independence, a document that Tidwell said was originally meant to be read aloud when the original 25 copies were distributed among the colonies. 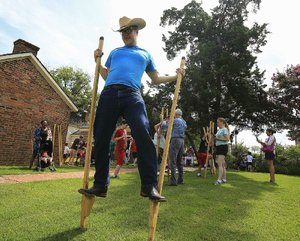 Photo by Staton Breidenthal
Mark Ford tries walking on stilts Thursday during the Frontier Fourth of July event at the Historic Arkansas Museum in Little Rock. More photos are available at arkansasonline.com/75frontier/.