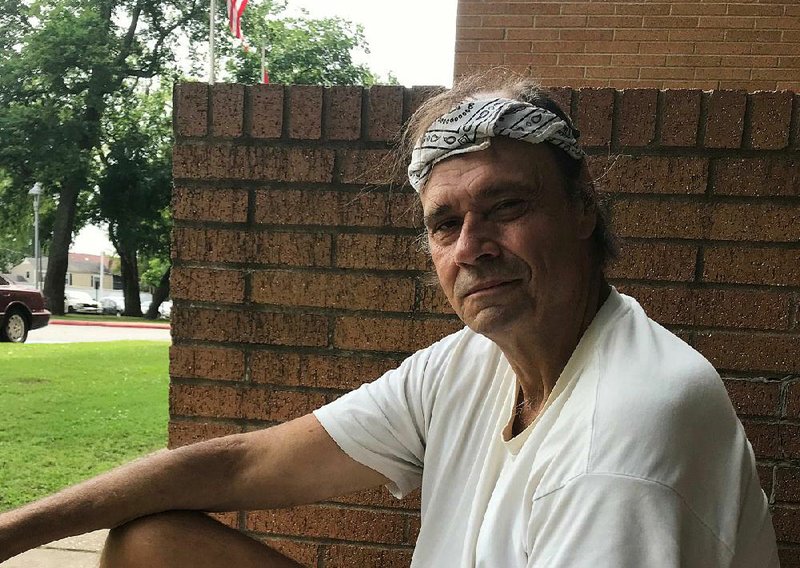 Noel Mooney is one of 109 people since 2017 to get into subsidized housing in Little Rock because of a preference for helping the homeless. Mooney became homeless after his mother died in 2011.

Two images stacked atop each other in a Jericho Way brochure depict Noel Mooney at the end of a stint living on the streets of Little Rock and the start of his time staying in subsidized housing in the city.

The first, labeled "Before," shows Mooney curled up on his side, his 6-foot, 11-inch frame scrunched into the entryway of a Denny's, a garbage bag sitting next to him.

The second, labeled "After," shows Mooney lounging on a couch in his new apartment with a fresh haircut and a hesitant smile on his lips.

Mooney, 55, became a tenant at the Fred W. Parris Tower as the property transitioned from public housing to Section 8 vouchers under the federal Rental Assistance Demonstration program. The program allows housing authorities to partner with private companies to refurbish aging housing stock.

"It's better than being on the streets," he said of his apartment.

The Metropolitan Housing Alliance has put several properties through the Rental Assistance Demonstration process, which is ongoing at others. The program also allowed the housing authority to designate more slots for homeless people than it has in recent years.

"I think everyone around the country knows that homelessness is a problem, so we're just trying to do our part and do as much as we can with the money that we're given," said Jeannie Owens, the housing authority's director of the housing choice voucher program.

Since the start of 2017, the housing authority has had 1,445 new admissions through its regular Section 8 voucher program. Residents in the program receive vouchers, find landlords to whom they pay 30% of their incomes in rent, and federal dollars cover the rest.

With regular Section 8 vouchers, people are responsible for finding places to stay and have private landlords. With project-based Section 8s, people receive vouchers to live in housing authority-owned properties and can sometimes move to private residences after certain lengths of time.

In 2018, the housing authority also increased the maximum number of regular vouchers designated for homeless residents from 50 to 100, Owens said.

Maximizing federal funding to serve the homeless is a near-constant process of learning and re-learning financing rules from the U.S. Department of Housing and Urban Development, especially when presidential administrations change, she said.

She added that rules changes mean it can be difficult to figure out how to best serve the homeless population. Their incomes are often from disability checks or Social Security, which means the housing authority foots most of their rent.

"Due to limited funding -- we have to come up with a perfect equation," Owens said.

Mooney got into the tower in 2017, a little over a year before the property switched to project-based Section 8.

Although Parris Tower's official preference is no longer for the homeless, four other properties that are a part of the rental assistance program -- Jesse Powell Tower, Madison Heights, Metropolitan Village and Cumberland Manor -- have started prioritizing people who are formerly homeless or are working.

At the most recent housing authority board of commissioners meeting, chairman Leta Anthony instructed the staff to look into grants that could help the homeless pay security deposits to private landlords and ways to make it easier for them and other people with low incomes to apply for housing, including putting a computer in the lobby of the main office.

Mooney is one of 109 people since 2017 to get into subsidized housing because of homeless preference. His income comes from disability checks, and he pays $217 per month in rent.

Owens said that in the five years she's been with the housing authority, she's also seen an increased effort to work with homelessness-service providers.

Mooney connected with the housing authority through Jericho Way, a day center for the homeless in Little Rock.

Mandy Davis, now the director of Jericho Way, was his caseworker at the time.

The two met because of Curtis Zachary, who would pass Mooney nearly every day on his way to work. He said he was struck by the fact that Mooney never begged for money. Zachary would stop to talk and drop off things like food, water and bug spray.

"He [Mooney] said sleeping at night on the streets, dogs and raccoons would come up to him and he would wake up," Zachary said. "I just can't imagine. That's part of what drove me to help him."

Mooney says he developed the habit of cleaning parking lots and the sidewalks in front of stores to earn money when he became homeless. Sometimes, he'd get enough cash to buy food.

He still cleans lots when he has the chance and saves up to buy Coca-Cola. It's the one thing he splurges on, he said.

Zachary, who still sees Mooney about once a week, said he stocks up on cases of Coca-Cola for Mooney to pay him back for and keep at the housing authority. When the air conditioning in his apartment went out last month after a storm, Mooney sat outside in the shade with a bandanna on his head and a soda in each hand.

Mooney became homeless after his mother died in 2011. He'd been taking care of her and his brother, who has severe arthritis.

After her death, he lost the house and started camping outside a Denny's restaurant. That was nearly four years before he met Zachary.

After about six months of getting to know Mooney outside the restaurant, Zachary reached out to Davis on Facebook.

Davis said she received a photo of Mooney asleep on the concrete with an accompanying message that read: "I don't know who you are, but I've heard about you and I need your help. My friend is sleeping outside."

After talking with Zachary a few times on the phone, Davis officially became Mooney's caseworker.

"I said 'has anyone talked to him about housing? Because he could be housed,'" Davis said.

When he first arrived at Jericho Way, Mooney said Davis first helped him get his birth certificate and Social Security card. That part of the application process took the longest.

That is where homelessness-service providers are often the most help to the housing authority, Owens said.

"We just didn't have the resources to start from the bottom with them having no ID and that sort of thing, and so definitely being able to iron out a system of how can we serve these people best is not by us trying to do some of the groundwork," Owens said.

When Mooney got his documents in the mail, Davis said his face lit up. He and Zachary went to Wendy's to fill out the rest of the paperwork.

She's worked to ensure that people getting housed have connections with other people through Jericho Way or other organizations, but said it's rare for two people to connect randomly the way Zachary and Mooney did.

"People need people," Davis said. "Our biggest intervention has been putting people like you and me in the lives of people like Noel [Mooney]."

The housing authority approved Mooney in 2017 for an apartment soon after he submitted his paperwork. Settled Souls, a Little Rock nonprofit, furnished his new apartment. During the renovations of the tower, he's had to move from the second floor to the 11th, and said he likes the view overlooking the Capitol better.

He's made friends with several people at the tower -- they have birthday parties, smoke cigarettes outside, and some residents play bingo every once in a while, he said. He also likes his time alone in his apartment, usually listening to the radio or watching talent shows like The Voice on his small television set.

Mooney also gives change to people who are still homeless and is in contact with a couple of friends who remain on the streets.

"I give back to the people that need help," he said.

But he says little about how he felt when he was homeless or what he thinks about his new situation: that was bad, this is better.

"I let it go," Mooney said of his time on the streets.