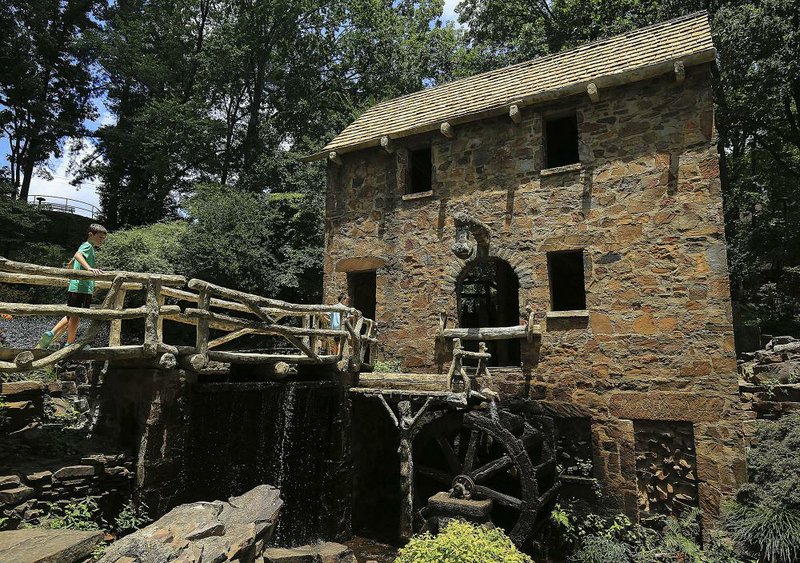 North Little Rock officials said they hope the cascading waterfall, which will help power the wheel of the gristmill, will be completed by the end of the month.

The addition of a cascading waterfall to North Little Rock's Old Mill will turn the city's most photo-friendly spot into an even bigger draw, park supporters say.

The waterfall will power the wheel of the replica gristmill, which appeared in the serene opening scene of the 1939 film Gone With the Wind.

"We decided that getting a cascading waterfall up there would add a lot of ambiance to the area," said Bert Turner, president of the Friends of the Old Mill volunteer group that helps to maintain the city park. "Everybody likes flowing water, of course.

"We think it's going to draw a lot more people to North Little Rock, specifically to the Old Mill," he said.

Creating the waterfall will be possible when the city's Parks and Recreation Department finishes installing a pump to draw water from Lakewood's Lake No. 2 back up the hill to the top of a rock wall feature on the park's north end, Turner said.

"It's going to flow down from there at 400 gallons a minute," Turner said. "That's a lot of water. That should provide enough water to run the mill and run into the little creek and into those ponds. It will be a beautiful thing. I just think it's going to be a tremendous addition." 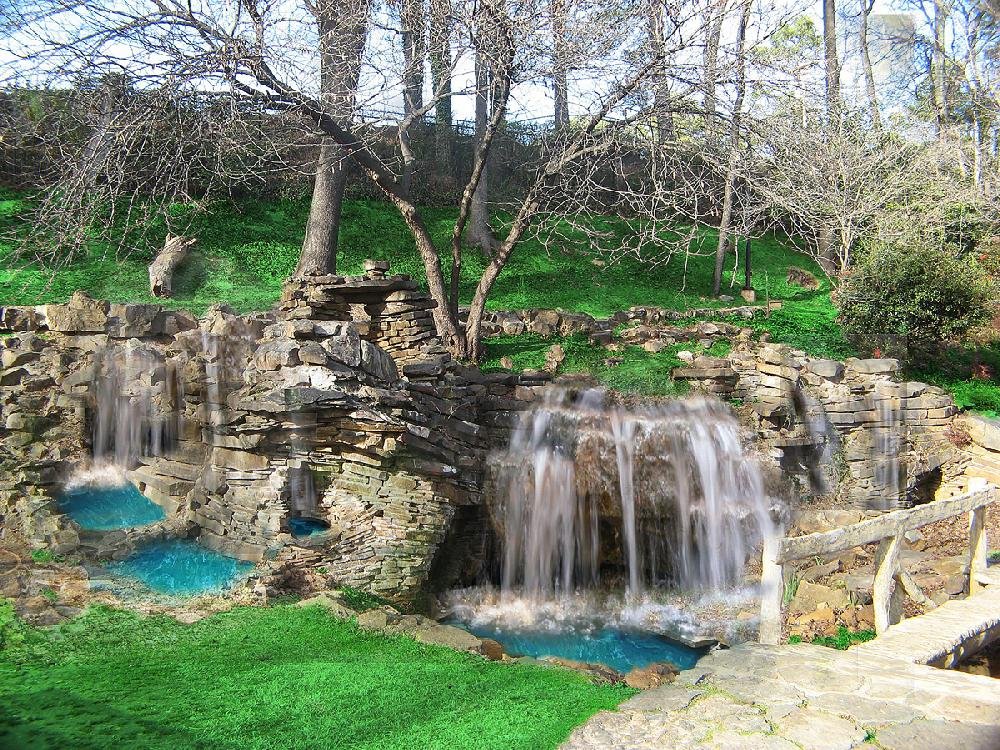 A photo rendering illustrates what the cascading waterfall at the Old Mill in North Little Rock will look like when it’s finished.

The Old Mill at T.R. Pugh Memorial Park at Lakeshore Drive and Fairway Avenue is a replica of an 1880s water-powered gristmill, conceived by real estate developer Justin Matthews and completed in 1933, six years before its brief inclusion in the opening sequence of Gone With the Wind.

Matthews donated the Old Mill and its surrounding park to North Little Rock in 1976. The site was placed on the National Register of Historic Places in 1986.

Neither the Parks and Recreation Department nor the North Little Rock Convention and Visitors Bureau keep any count of visitors to the Old Mill because the public park is free to enter and a counting device was never added. The park's scenic beauty is a frequent draw for tourists, senior class group photos, wedding and engagement photos, group tours, parents with young children, and amateur and professional photographers on a near-daily basis.

The travel and restaurant website TripAdvisor last month awarded The Old Mill at T.R. Pugh Memorial Park its Certificate of Excellence for the fifth-consecutive year. The designation represents the top 10% of businesses listed by tripadvisor.com for "great service and hospitality," earning the Old Mill a spot in the TripAdvisor Hall of Fame, the Convention and Visitors Bureau announced.

The facility needed a bit of sprucing up. Last month, for example, workers replaced the roof.

"The old roof -- you could see the holes through it," said parks director Terry Hartwick.

"Now people who come from all over the United States to the Old Mill will not be seeing light through the roof."

None of the work will harm the Old Mill's status as part of the National Register of Historic Places, said Sandra Taylor-Smith, executive director of the city's History Commission and vice president of the Friends of the Old Mill.

Similar materials were used for the roof replacement, she said, and late in 2017, the organization and the History Commission together began gathering vintage photos of the Old Mill and the park to try to match how it looked before 1940.

She said people donated or lent the effort enough photos "to know it basically looks like it did then," she said.

"The waterfall is just to keep the water moving and to be another attraction," Taylor-Smith added. "It certainly doesn't take away from the historic nature.

"As I say all the time, the Old Mill is our crown jewel."

A leak from another lake, No. 3, Turner said, used to provide enough water to turn the gristmill wheel, but the city fixed that leak several years ago. The city has been providing much of the water to keep the wheel moving, he said, so the ability to pump water from Lake No. 2 will "keep us from using city water," Turner said.

The work on the waterfall addition would have already been finished by now, but recent flooding and cleanup work from the flood have taken up many city resources and worker hours. Some low-lying neighborhoods and almost all of Burns Park south of Interstate 40 flooded, as did the Arkansas River Trail and the downtown riverfront.

Everything needed cleaning, Hartwick said. He added that he hoped the work can be completed by the end of the month.

He said he plans to hold a celebration.

Envisioning the project, he said the cascading waterfall will flow into a pond. Then, it will go back up and start over again.