Judge blocks new rule to get parties on ballot in state 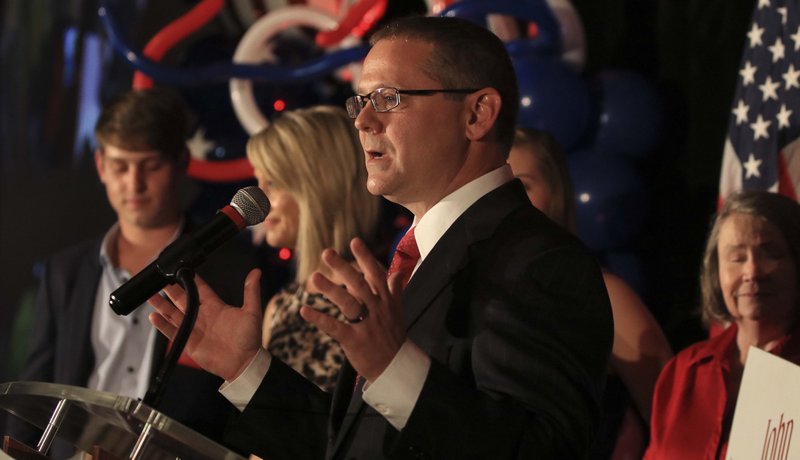 In this file photo Secretary of State John Thurston speaks to supporters on Nov. 6, 2018 after winning the election for secretary of state. ( Democrat-Gazette file photo / Staton Breidenthal)

A federal judge has blocked the enforcement of six state laws that, among other things, require new political parties to obtain significantly more signatures than have been required in the past decade to obtain access to statewide election ballots.

The party sued in March, alleging that the laws unconstitutionally increase the number of valid signatures that new political parties must collect on petitions from 10,000 to 3% of the total vote cast for governor in the last general election. That would require the party to obtain 26,746 valid signatures to get on the 2020 ballot.

In a 60-page order, Baker said Thurston and his representatives must refrain from imposing the 3% requirement on the Libertarian Party. She said they also must refrain from failing to recognize the party as a new political party and failing to restrict ballot access to the group as a new political party if its petitions contain at least 10,000 signatures of registered voters in Arkansas at the time of filing and it otherwise complies with the law.

Attached to the order is an email the party's attorney sent Tuesday to the court and attorneys for the state, reporting that the party had submitted 18,667 petition signatures to the secretary of state's office on June 28.

The signatures haven't yet been verified, but attorney James Linger of Tulsa wrote, "Since the [party] began its petition drive on April 1, 2019, and is limited under current law to 90 days, and the court had not yet reached a decision on the motion for a preliminary injunction, it was thought best to turn in the signatures last Friday."

A preliminary injunction prevents the enforcement of challenged laws until the merits of the lawsuit can be considered.

Baker said in her order that she declines "at this stage of the proceeding" to alter deadlines for submitting new-party petitions or the party filing deadline, which were also challenged in the lawsuit, "as such changes might unintentionally affect the complex primary calendar in the state of Arkansas."

In a June 4 hearing on the preliminary injunction request, Michael Pakko of Roland, the current chairman of the state party, testified that the 3% requirement was struck down in both 1996 and 2006 by other federal judges in the Eastern District of Arkansas. The party says nothing has changed since then to justify re-instituting the 3% rule.

Linger said the harm to the party was increased by the state simultaneously moving up deadlines for submitting petitions.

"This was a Republican deal," he told Baker during the hearing.

He said the Libertarian Party is seen as a threat to the Republican Party, the state's dominant party both in Congress and in the state Legislature. He said votes for Libertarian candidates are believed to take votes that might otherwise go to Republicans, with whom Libertarians are more closely aligned than Democrats.

Print Headline: Judge blocks new rule to get parties on ballot in state