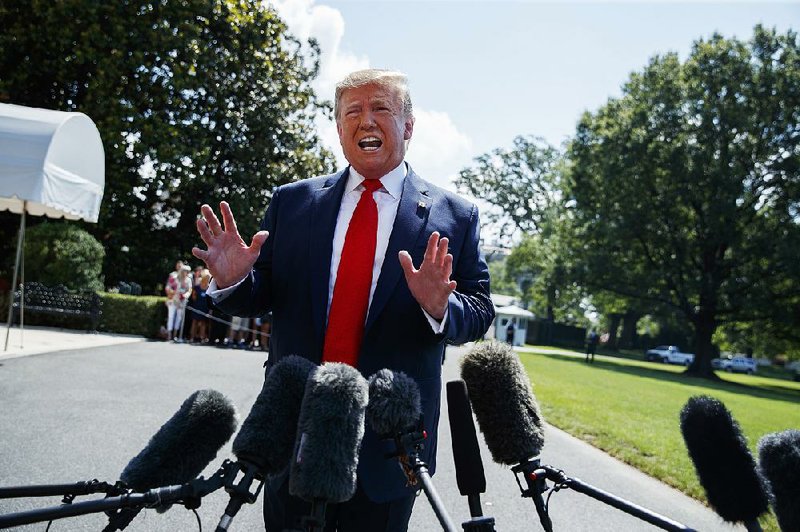 President Donald Trump said Friday before leaving Washington that his administration has “four or five ways” to add a citizenship question to census forms.

Justice Department lawyers told a federal judge on Friday that they would press ahead in their efforts to add a citizenship question to the 2020 census, but they indicated they did not know yet what kind of rationale they would put forward.

The five-page filing said the court would be notified "in the event" the U.S. adopts a new rationale for adding the question.

The assertion capped a week in which administration officials first promised to abide by a Supreme Court order that effectively blocked the question from next year's head count, then reversed themselves after President Donald Trump denounced their statements on Twitter as "fake news" and pledged to restore the question.

Trump told reporters on Friday morning that he was considering issuing an executive order adding the question to the census.

Chief Justice John Roberts wrote the opinion last month in which the court rejected the Trump administration's justification for adding the citizenship question but left open the possibility that it could present a better rationale.

Commerce Secretary Wilbur Ross had said the goal of the question was to help the Justice Department enforce the Voting Rights Act, which protects voters who are members of minority groups.

"I have a lot of respect for Justice Roberts, but he didn't like it," Trump said. "But he did say come back -- essentially he said come back."

After the Supreme Court ruling, administration lawyers said they planned to drop the issue and would print the census questionnaires without asking about citizenship. But Trump wrote on Twitter that his administration would find a way forward.

Trump on Friday offered some support for Ross, who is responsible for the census, calling him a "good man." Trump also said he had spoken to Attorney General William Barr about his options.

"We can start the printing now and maybe do an addendum after we get a positive decision," he said. "We have a number of different avenues. We could use all of them, or one."

The administration's lawyers had told the Supreme Court that the deadline for printing the forms was June, while groups challenging the question said the forms could be printed as late as October, though at additional cost.

Friday evening, the American Civil Liberties Union asked a federal judge in New York to permanently block the administration from adding the citizenship question to the 2020 census.

"The Trump administration repeatedly argued the census forms could not be altered after June 30. They've now changed their tune because the Supreme Court ruled against them. They can't have it both ways," said Dale Ho, director of the ACLU's voting-rights project.

Trump did not say what his options were. But people familiar with the discussions said that among the things being considered is using federal records other than the census questionnaires sent to every household to try to glean information about migrants.

But the Constitution assigns the responsibility for overseeing a decennial census to Congress, not the president. And Congress has limited executive authority over the census, as the Supreme Court recognized.

"The taking of the census is not one of those areas traditionally committed to agency discretion," Roberts wrote, meaning that it cannot be accomplished by unilateral executive action.

U.S. District Judge George Hazel in Maryland, where one of three lawsuits related to the citizenship question is being heard, had given the administration until 2 p.m. Friday to explain how it would proceed. An emergency hearing was called by phone on Wednesday after Trump tweeted that the administration was looking for a path forward.

Government lawyers have been scrambling to find a way to restore the citizenship question while obeying the Supreme Court's order. The justices ruled last week that the administration's rationale for the question was "contrived," and said that it could be added to census questionnaires only if officials could offer an acceptable explanation of why it was needed.

The question's opponents say recently discovered evidence from the computer files of a Republican redistricting consultant who died last year shows that, far from helping voters in minority groups, discrimination against Hispanics was behind the push for the citizenship question.

That rationale has been the central issue in the battle over the question, which has morphed from a legal confrontation in four federal courts to a fierce partisan struggle. Census figures determine how the government allots hundreds of billions of federal dollars for programs that impact the entire nation, citizens and noncitizens alike.

The administration's focus on asking broadly about citizenship for the first time since 1950 reflects the enormous political stakes and potential costs in the once-a-decade population count that determines the allocation of seats in the House of Representatives for the next 10 years and the distribution of some $675 billion in federal spending. It also reflects Trump's interest in how congressional districts are drawn.

The Census Bureau's own experts have said a citizenship question would discourage immigrants from participating in the survey and result in a less accurate census that would redistribute money and political power away from Democratic-led cities where immigrants tend to cluster to whiter, rural areas where Republicans do well.

Hazel on Friday gave the plaintiffs in the Maryland claim until Aug. 19 to gather more evidence and take testimony from administration officials. If Hazel finds discrimination, that could be a separate basis for blocking the citizenship question.

Preparations for the $15.6 billion 2020 census are intricately choreographed. More than 425,000 people have already started applying for the half-million positions needed for the 2020 census. The bureau also is in the middle of a test run, with 480,000 households sent questionnaire information, according to the bureau's monthly status report from May.

Information for this article was contributed by Michael Wines, Maggie Haberman and Adam Liptak of The New York Times; by Mark Sherman, Jill Colvin, Michael Kunzelman and Michael Schneider of The Associated Press; and by Justin Sink, Andrew Harris and Bob Van Voris of Bloomberg News.