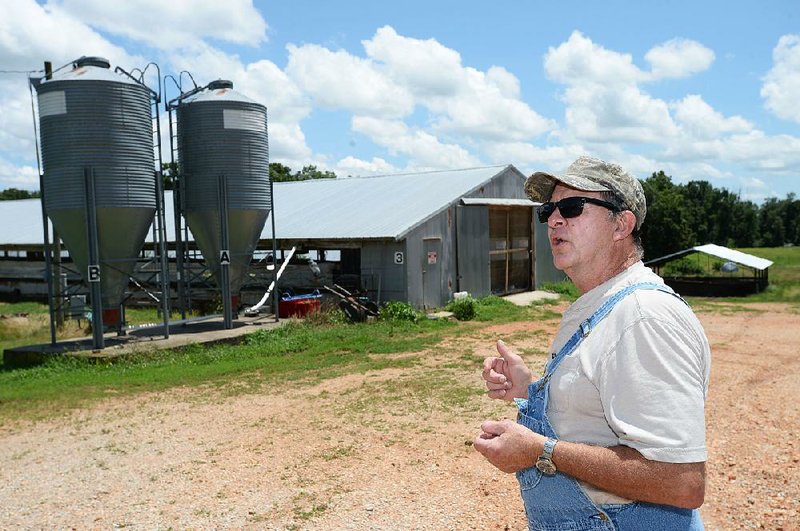 Chicken grower Ed Milliken of Bentonville is ending his long relationship with George’s, saying his pay wasn’t keeping up with expenses, which were mushrooming.

BENTONVILLE -- Ed Milliken was on his last flock.

One of several longtime contract growers that producer George's Inc. asked to drop out of the chicken-growing business because of outdated houses, Milliken described his immediate future -- free weekends for travel, days spent tinkering in his garage, a nap.

"George's didn't have to pay us out," Milliken, 65, said outside one of his chicken houses on a sunny June afternoon. "What they're doing is a gracious gesture," he said.

The way he saw it, his options were to continue raising chickens in his old houses for another year or take the cash and get out early. Variables included the state of his old chicken houses, his health and what he might be paid if he stayed on a little longer.

"They're not buying our contract out. But it at least is a consolation, like working at a place 30 years and getting a gold watch. The timing was right," he said. "But the business has changed a lot, too. It's not fun."

A message seeking comment from George's about how many growers were asked to take a buyout was not immediately returned.

Since starting in 1986, Milliken has seen the ups and downs of the business. Early on, he earned enough to steadily expand his farm on the outskirts of Bentonville near Bella Vista. There was money in it then, he said. But inflation and consolidating companies cut into his revenue.

In the era of President Harry Truman, the risk of financing chicks and feed independently was a hurdle for farmers, according to the National Chicken Council. The contract growing system, developed in the '50s, was supposed to help reduce the risk of raising chickens. Vertical integration, a practice of owning all areas of production, manufacturing, distribution and marketing, started in the 1940s and has taken hold since. By the mid-'60s, 90% of broiler chickens were produced by integrated operations.

The key was in the contract. To diminish risk on both sides, the companies agreed to pay growers for raising their birds on a per-flock basis. In general, companies deliver the chicks and feed, and all the growers have to do is provide the housing and utilities. Once the birds are grown, they are hauled away for slaughter.

More than 85% of meat chickens are raised under contract, according to the U.S. Department of Agriculture. Company-owned farms raise the rest.

The pay is based on a feed-conversion ratio. Growers, essentially, buy the chicks and feed from the company and the company buys back the grown birds. After a flock cycle, usually four to six weeks, growers are paid on an average feed-per-pound basis. For example, the optimal bird gains the most weight with the least amount of feed.

Along with the feed-conversion ratio, companies factor in competitive incentives and penalties in a practice called a tournament system. For example, if there are 10 growers raising flocks at the same time, only a few will see a bump in pay. The rest will see no change or a dock in pay. Meaning that growers who take out loans to build chicken houses on their property are not guaranteed the same pay per flock.

The industry supports this system because growers essentially are paid for how well they take care of the chickens. It also keeps chicken prices low for customers.

The system has come under fire from grower advocacy groups, claiming the chicken companies have too much control over the growers.

In some cases, growers with new houses were told to meet costly contract requirements -- to update feed and water lines, etc. -- while some growers with older houses weren't, even though they contract with the same chicken company, said Tyler Whitley, a contract agriculture reform program manager at Rural Advancement Foundation International-USA, a farming nonprofit in North Carolina.

If one day companies wanted their birds raised in newer houses, they could send notices to the growers requesting costly upgrades, which would come out of the farmer's pocket. And if the farmer refuses, companies have the right to terminate the contract.

"What ends up happening is a company is able to make very specific requirements for growers in order for them to continue receiving birds," Whitley said.

Market conditions and other criteria outside of the growers' control also can lead to contract termination, "which makes growers hesitant to voice any concerns and speak in general about the industry," he said.

It wasn't always this way. In 1950, there were 19 chicken-processing plants in Springdale, according to the Encyclopedia of Arkansas History & Culture. Over the years, however, chicken companies began to snap up the smaller ones, consolidating operations and diminishing the negotiating power of poultry farmers, ultimately leading many to leave the business. From 1980 to 1990, the number of independent poultry farms in Arkansas fell from over 6,000 to 1,200, according to the Encyclopedia.

As a case manager, Whitley talks with poultry farmers regularly about the industry. They've called him with complaints about company requirements for upgraded waterlines, cooling cells, light bulbs and other equipment, which can cost tens of thousands of dollars. To make the capital investments, many growers take on additional debt.

"The chief abuse we've seen is the instability of the contracts," Whitley said. "[Farmers] have mortgage checks, electricity bills, heating costs ... but they have no way to estimate what their pay is going to be in the tournament system."

The system also has come under fire from the Small Business Administration's inspector general, who wrote a report last year saying the relationship between the companies and independent growers appeared "affiliative," calling into question roughly $1.8 billion in loans written over a four-year span. About 371 loans went to Arkansas poultry growers, a spokesman said in an email.

The chicken houses on Milliken's property are old. They don't have fancy electronic thermostats, the most up-to-date water equipment or tunnel ventilation. They have caked layers of sawdust, cobwebs on the rafters. The newest one was built nearly 23 years ago. Large fans around each house circulate air and gas heaters keep the houses between 80 and 90 degrees.

Most growers couldn't get away with a setup like his, he said, thinking of stories he heard of growers losing their contracts if they refused to upgrade.

"'We would prefer you to do it, but we won't demand it,'" Milliken recalled officials saying one day. He had raised chickens in his fourth house, built in 1996, for about three years before tunnel ventilated houses became the industry standard, making his newest investment obsolete.

Newer houses meant bigger, better birds, Milliken said. He knew what to expect. Eventually, the stubborn farmers with the outdated houses would rank below middle in the industry's tournament system and be paid less than average.

"If I had been making money, I would have paid for tunnel ventilated houses with cash money," he said. "I wouldn't have had to take out a loan."

On average, growers have seen roughly a 2-cent-per-pound pay raise from 1990 to 2016, according to data with the National Chicken Council. Factoring inflation, the quality of their pay fell more than 5%. Meanwhile, wholesale chicken prices have climbed by 11.5 cents a pound and retail prices by 44.2 cents.

Pay would drop when the chicks got sick. That's part of the reason Milliken took the buyout offer -- his older houses get too cold in the frigid months and too hot in the summer.

"I can't compete with either one of those extremes," he said. "I'm obsolete. And it's all right. George's has been a good company."

One hot August day, the fans cooling his birds went out. His electric lines were fried, and he couldn't get the fans going again in time.

Some days the chicks were sick when they were delivered to the farm, he said, other days they could be perfectly fine. But because the company didn't deliver the feed on time, they grew sick.

"It doesn't matter what happens out here, it's your fault," he said.

When asked how much George's paid him to exit his contract, he wouldn't say outright. Instead, he said about 75 cents per square foot of his chicken houses.

"I consider that a generous offer."

He knew of other growers who either agreed to take the buyout or finish growing flocks for George's next year. He guessed around 60 growers accepted the deal, which meant the newer growers that likely have finished at the top or middle of the tournament system would fill in the gaps left by Milliken and others.

"That's what the young ones can't comprehend," he said.