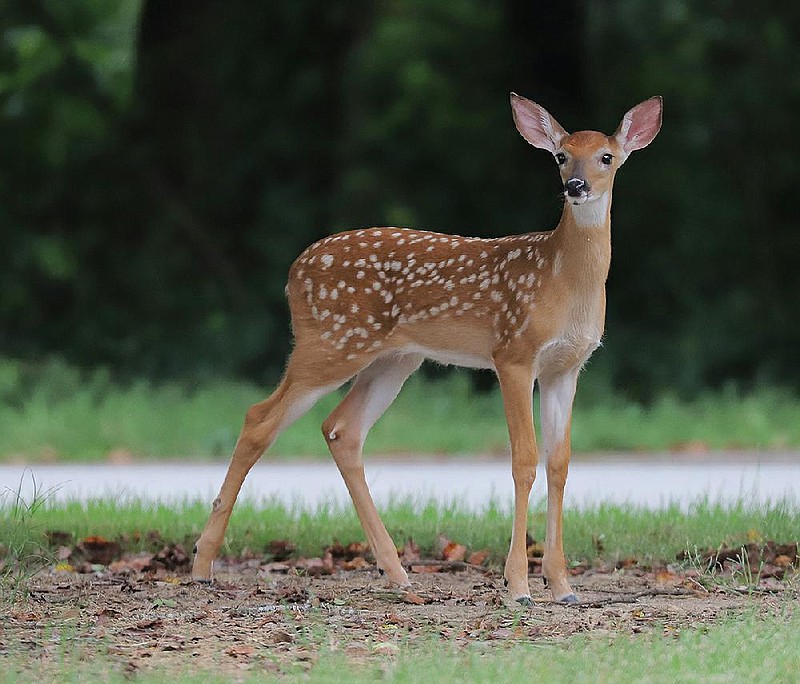 Arkansas Democrat-Gazette/JOHN SYKES JR. - 061719 - A deer stands attentively on the side of Pine Valley Road in Little Rock Monday afternoon.

Little Rock city board members are considering an urban deer hunt to buck a trend that has seen a steadily rising number of whitetail roaming in streets, gardens and yards across the city.

“You just need to recognize there’s a problem,” Kumpuris said. “We have to get it down to a maintainable number of deer here.”

Kumpuris, who was on the city board in 1998 when Little Rock amended a city ordinance to ban the use of bows with a pull of more than 40 pounds, said he often hears from residents who have seen deer struck by vehicles in the city or have seen deer in densely populated areas.

The primary fear, Kumpuris said, is that the deer will cause vehicle accidents and injuries when they wander into roadways, though the damage to local foliage and the disease-carrying ticks that accompany deer herds are also a concern.

“They have no predators, so they continue to proliferate,” Kumpuris said. “We have to be realistic about our problem. When someone’s going home one night, and a deer steps out, and there’s an accident, it goes from a nuisance to a danger.”

[WEEK IN LR: Sign up for newsletter recapping biggest stories in Little Rock each week » arkansasonline.com/emails/]

Little Rock directors outlawed bow hunting in city limits after multiple complaints of deer carcasses or hunters in neighborhoods, Kumpuris said. The city passed an ordinance to include certain bows in firearm restrictions on Dec. 1, 1998.

As early as 2001, the city began looking into the possibility of an urban deer hunt, according to previous reports. Kumpuris said there were few mechanisms in place in 2001 to ensure those who hunted within city limits were trained to shoot responsibly.

“If we’d gotten it taken care of then, we wouldn’t be dealing with this now,” Kumpuris said.

Now, however, Meeker said the Arkansas Game and Fish has multiple oversight measures in place for potential hunters in its Deer Management Assistance Program.

Eight cities across Arkansas employ urban hunting as a wildlife population control measure, Meeker said, and each one may tailor the rules to fit the town’s needs. Arkansas Game and Fish supplied three options to the Little Rock city board as potential urban hunt frameworks.

In the first option, the city could simply allow hunters to follow state and local regulations in bow-hunting, and each deer would count toward the hunter’s bag limit.

The second option involves the city becoming a de facto hunting club. The city could choose who hunts, supply extra tags for hunters and decide on a duration for the hunt within the statewide hunting season. An Arkansas Game and Fish biologist would set up a plan for the hunt. The deer killed in the city in accordance with the Deer Management Assistance Program would not count toward the hunter’s bag limit.

The third option, which Meeker said is more commonly used in larger cities, would enroll Little Rock in the Game and Fish’s Urban Deer Hunt Program. The program requires hunters to complete the International Bowhunting Education Program, pass a shooting proficiency exam, attend an orientation and pay $50 in order to hunt in the city. The payment funds a liability insurance policy for the city. An approved hunter in one Urban Deer Hunt Program city can hunt in other cities involved in the program. Hunters are issued a placard and specific tags for the city they are hunting in, and there are no antler point restrictions or bag limits. The third option also requires that the first deer a hunter kills must be a doe, and that doe must be donated to the nonprofit Arkansas Hunters Feeding the Hungry Program.

Every option requires the city to alter its ban on the discharge of bows in city limits.

“The city chooses the option they pursue, and we can tailor those options a little bit more to make it a little bit more palatable for the city,” Meeker said. “Ultimately, we realize due to demographics, landing patterns, population and even acceptance of urban deer hunt mechanism, we need to let the city decide what’s best for them.”

If the board decides to pursue a deer hunt, Meeker said the city will need to decide what areas are open to hunters. In other cities, like Russellville, hunters are not allowed near city parks and must ask property owners before hunting on private property.

“The biggest issue is these hunters obtaining permission because this is private property they’re hunting on,” Russell-ville Animal Shelter Director Mike Vernon said. “They contact citizens or know people. Some of these other cities provide city lands to hunt on, but our only city land is the airport.”

Vernon said hunters are required to be discreet in removing deer carcasses, saying the program follows an “out of sight, out of mind” approach.

“I guarantee most people don’t know we have an urban deer hunting program,” Vernon said.

Before the Russellville program’s start in 2013, Vernon said the city’s animal services responded to an excess of wildlife-related car accidents.

“There were times in the past that we’d pick up two or three [dead deer] a day,” Vernon said. “The number of animals hit has gone down. I can’t say it’s all the hunting, but it seems like it’s helped.”

Vernon said there was a planning period of approximately six months before the first hunt in Russellville.

The urban hunting program in Heber Springs began in 2006, and Mayor Jimmy Clark said the city has seen a decline in the number of deer killed in recent years.

“I believe it has been a success,” Clark said. “We didn’t have a big harvest last year. The first year we had it, they may have had close to 100 deer, and last year only around 28.”

Meeker said the purpose of the urban deer hunting program is not to decimate the deer population but to bring the number of animals down to a manageable level.

“To say ‘How many deer do we need to remove?’ is really a moot point,” Meeker said. “We’re measuring what people can live with. Our goal is not deer eradication, it’s safety.”

Meeker said Arkansas Game and Fish has looked into other methods of deer population control but that urban hunting is the most cost-effective and efficient method.

“I think to be responsible managers we have to see this is a problem that’s not going away,” Meeker said. “It’s only going to get worse.”