Glory days: Crumbling old Arkansas grocery also was a theater for minorities and a family’s home 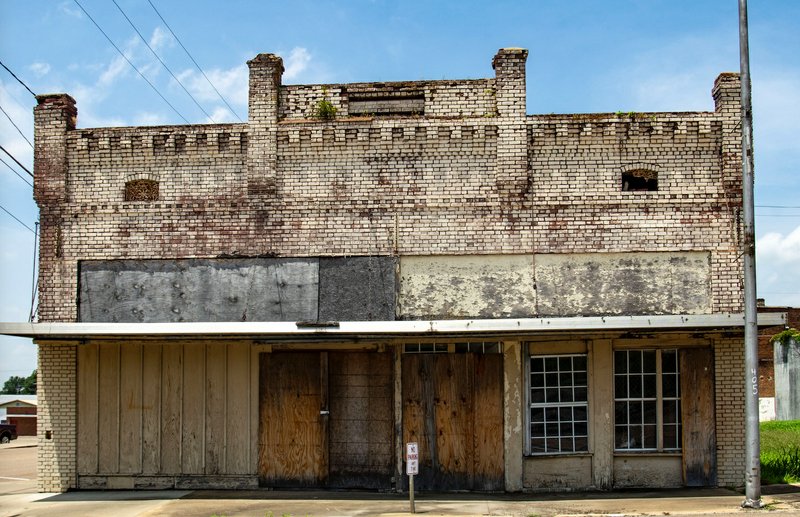 FORREST CITY — Only a few remnants of the Chu Building's past life could still be seen during a recent visit. Best known for having housed a grocery owned by a Chinese family on one side and the Harlem Theater on the other, it's the oldest brick building still standing on Front Street here.

In May, Preserve Arkansas added the structure, built about 1915, to its 2019 list of Arkansas' Most Endangered Places.

This is Part 2 of a series for which writer and photographer Cary Jenkins is visiting the seven structures on Preserve Arkansas’ 2019 list of Arkansas’ Most Endangered Places. See Part 1, her May 27 feature on the Scipio A. Jones House, at arkansasonline.com/endangered.

"The Chu Building is significant for its association with Chinese immigration in the Mississippi River Delta and Arkansas' African American history," according to a news release from Preserve Arkansas about the building once owned by the Chu family.

The building was nominated to the Endangered Places list by Stuart Towns. On a recent Friday, Towns and his wife, Helen Ruth, gave a tour of the building, which recently was deeded to the St. Francis County Historical Society by the family of Foon Quong "Frank" and Lily Chu.

Looking in from a front door — to the right — one sees a space that was a theater for black residents during segregation. The floor is poured concrete, and the screen would have been on the immediate right. A church used the building after the theater closed in 1966 and long pews and other furniture remain centered in the space.

[Gallery not showing up above? Click here for photos » https://www.arkansasonline.com/galleries/26698/album/]

Apolis Bailey, who was a cashier at the theater in the late 1950s, joined the tour. Outside, she pointed to a spot by the entrance to the theater, which was on the side of the building, toward the back.

"The ticket booth was here and it was round," she said, demonstrating how it projected out, "and there was opening there for concessions to sell from the inside to the people on the outside. It's all boarded up now."

She recalls the theater as being beautiful. "I actually don't think all of this was here, when I was here," she said of the boarded walls inside.

"That tile was all the way across," she added, pointing to a hole in the ceiling through which the original pressed tin could be seen. "This ceiling has been lowered ... it was pretty. These walls were not like this. Some of it has been torn away ... When you came in — it was beautiful."

Moviegoers would enter the theater from the back, passing a narrow set of stairs leading to the projection booth and to the owner's office, where Towns said he recovered a variety of artifacts.

"We have several boxes of things that were still in the office. It's like he showed his last movie, turned around, walked out, locked the door and never came back."

"All the paperwork was up here," Towns said, at the top of the stairs, looking into the office. "You have all kinds of receipts from back in the '40s, '50s and '60s. This was piled up here with all kind of marquee information, what movie was playing when."

Still on the office wall, one tacked up after another, are the theater's business licences. The earliest is 1949. There are still tickets, hot dog wrappers, movie magazines and scattered about are even the rusty, round, tin film canisters that would have held movie reels.

When movies played at night, there were two young girls on the other side of the building listening in, Towns said. The left side of the building was leased to a Chinese family, the Howes. It held Howe's Cash Grocery, and the family made their home upstairs at the back of the store.

"The girls told me they'd lie in bed at night and listen to the movies from the theater."

Going back to the front of the building and looking in toward the left, there are the original wooden floors. Today, sheets of plywood allow firm footing across weakened floorboards. The walls are covered in layers of peeling paint and a grid that once held the lowered ceiling remains overhead. At the back is a tiny kitchen with bright yellow cabinets and a very low ceiling. There's also a bathroom, and narrow stairs lead to another tiny space upstairs where the family lived.

Standing in the Howes' kitchen, Helen Ruth said, "This is the outside door, and you see right here where this has been cut into?" She pointed to the ceiling over the door. "This was their fire escape. If that part of the building had caught on fire they could not get downstairs. They had a rope from upstairs so the family could slide down the rope.

"They added the upstairs living quarters. That's why the ceiling is so low."

The grocery closed in 1972, she said. Preservationists don't believe the Chu family, who owned the building, and the Howe family, who ran the grocery, were related.

In the nomination form to include the Chu Building on the endangered places list, the society wrote that they plan to repair, renovate and restore the building to full use. "Our vision is to develop an East Arkansas Delta Multicultural Museum and Archives, as well as office and research space for the Historical Society."

"We have identified over 20 cultures or nationalities that lived in the Delta region," Towns said. The museum would include exhibits on these cultures such as the Howe and the Chu families, who were part of the Chinese immigration into the Mississippi River Delta and operated grocery stores which traded extensively with the black community.

And, the society has boxes of ephemera and items recovered from the theater patronized by the black community during segregation that can be included in exhibits.

Towns says one thing they'd like to do when the building has been restored and researchers determine what movies were played on certain days, is to use the lot next door to show outdoor movies — on days corresponding to the original dates the movies played in the theater.

But first things first. The building must be restored. The roof has been patched to prevent more damage from weather, but it needs to be replaced and floors and walls need to be repaired.

To find out more about the building or how to help, email the historical society at sfchistoricalsociety@gmail.com.