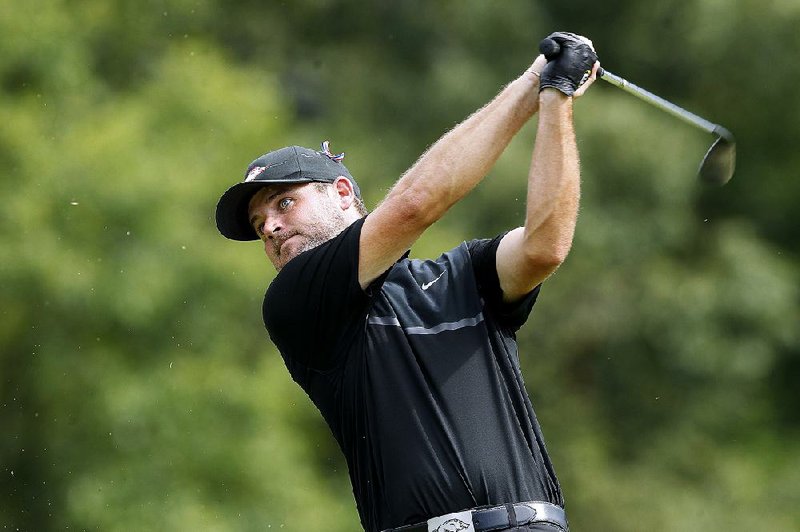 Beau Glover shot a 6-under 58 in the final round Sunday to win the Fourth of July Classic at War Memorial Golf Course in Little Rock. For more photos, see arkansasonline.com/78golf. ( Arkansas Democrat-Gazette / Thomas Metthe)

Beau Glover has seen his share of heartbreak in three previous Fourth of July Classics, finishing runner-up to Chris Jenkins each time he's played in the tournament.

Glover rallied with a 4-under-par 62 in 2014, only to fall a stroke short. In 2015, Jenkins defeated Glover in a one-hole playoff, but it was the last time he played in the tournament in 2016 that brought him the most anguish.

Glover lost a six-stroke lead after the first two rounds to become the bridesmaid again to Jenkins, who won for the eighth time on his way to a record 10 victories -- including five consecutive -- at War Memorial Golf Course in Little Rock.

Glover's fortunes changed Sunday in the final round at War Memorial, and all he could do was watch as it played out. Glover, 34, playing in the penultimate group, had just finished off a spectacular 6-under 58 by nearly holing out for eagle from the 18th fairway. Settling for birdie, Glover was still a stroke behind Rodrigo Rivas, who was on the green at the par-4 18th in two shots and looking to cap the championship with a two-putt or better.

Gallery: Final Round of 4th of July Classic Golf

[Gallery not appearing above? Click here for photos » https://www.arkansasonline.com/galleries/26716/album/]

Glover was readying his consolation speech when Rivas' birdie attempt from 16 feet sped by the cup. Then the unthinkable happened: Two subsequent short misses cost Rivas a chance for a title and a playoff, handing Glover the championship as the shocked crowd behind the green fell silent when the Chilean completed his four-putt for double bogey.

"I hate that it ended like that, but it goes to show you how every shot is important from the beginning to the very last one," Glover said. "I know how crushing it was for me when I had that six-shot lead on the last day [in 2016] and lost it."

Rivas took a one-stroke lead over Zack O'Riley -- who led after the first two rounds -- and Glover with birdies at the 16th and 17th, both par 3s.

O'Riley, whose twisting 30-foot birdie putt at the par-3 13th gave him a two-shot lead at 7 under, fell back a stroke with a bogey at the 15th when his drive came to rest before reaching the Fair Park Boulevard and Zoo Drive intersection, then watched Rivas curl in a 15-foot birdie at the 16th to forge a tie at 6 under. O'Riley's bogey at the 17th and Rivas' 18-foot birdie putt meant a two-shot swing heading into the final hole.

Rivas, a 2018 graduate of the University of Central Arkansas, said his plan was to stay aggressive with his birdie attempt at the 18th, but the plan backfired.

"I was definitely trying to birdie 18," he said. "I went past it by mistake. Thinking I still had a good chance for par, I thought I made it coming back, then the next one rolled past and that was it. Not good on my part. Definitely big mistakes there."

Glover began the final round at even par and four shots down to O'Riley, but he got into contention by getting to 4 under after the opening five holes, which included a chip-in for eagle at the par-4 3rd. A bogey at the par-3 9th left him with a 3-under 29 on the front nine, as O'Riley carried a three-stroke lead over Rivas and Glover at the turn.

O'Riley, who played at Arkansas Tech University from 2011-13, was pleased with his tie for second despite the late hiccups.

"Rodrigo hit some great shots and made some nice putts there, and obviously Beau played well," O'Riley said. "All in all, I'm happy with my best finish in this tournament and especially playing against this field."

Jenkins, whose five-year tournament reign ended with a tie for sixth place at 2-over 194, said he had a good run and that War Memorial's closing and final Fourth of July Classic will be something he'll always cherish.

"No matter what happens next, I think the Fourth of July championship is over," Jenkins said. "You can never have one somewhere else. Moving it to another course wouldn't be the same thing."

"There's no other golf course like this, and definitely no other tournament like this," said McNulty, a two-time winner of the tournament.

Glover, a former University of Arkansas standout who lives in North Little Rock, said to win the final tournament in front of his family and golfer friends was a perfect way to cap the weekend.

"I had a good feeling all week," he said. "I hit it really good all three days, and today everything clicked.

"It's really special to finish at the top of this tournament. There are a lot of great names that have won it. I am honored to join their names on the championship trophy." 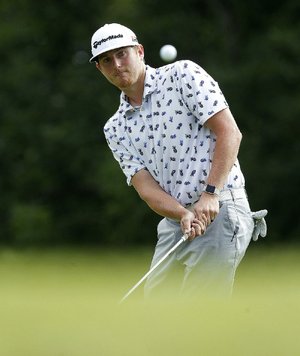 Photo by Thomas Metthe
Zack O’Riley chips onto the 17th green during the third round of the Fourth of July Classic on Sunday at War Memorial Golf Course in Little Rock. O’Riley finished in a tie for second with Rodrigo Rivas at 5 under.