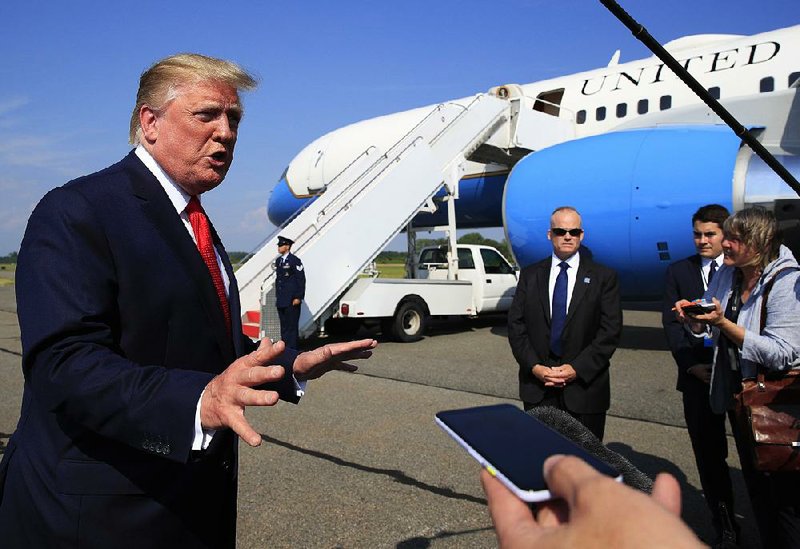 President Donald Trump, shown speaking to reporters in Morristown, N.J., before returning to Washington on Sunday, tweeted a defense of his administration’s response at the southern border.

"The Fake News Media, in particular the Failing @nytimes, is writing phony and exaggerated accounts of the Border Detention Centers," Trump said on Twitter -- a reference to The New York Times, which published a report Sunday about conditions at a facility in Clint, Texas.

Host Martha Raddatz cited a portion of the Times report: "Outbreaks of scabies, shingles and chickenpox were spreading among the hundreds of children who were being held in cramped cells, agents said. The stench was so strong it spread to the agents' clothing."

"It's an extraordinarily challenging situation," McAleenan replied, saying the children were at the Clint station "so they could have medical consolidated."

McAleenan said the number of children in U.S. custody had declined to 350 as of Saturday from 2,500 on June 1, thanks to a $4.6 billion emergency spending bill from Congress aimed at improving conditions for migrants apprehended at the southern border.

Despite the additional funding, McAleenan said, the government's resources have been strained by the surge of migrants seeking asylum.

Trump blamed asylum policies for the number of migrants, saying on Twitter that federal detention centers are crowded "because the Dems won't change the Loopholes and Asylum. Big Media Con Job!"

Ken Cuccinelli, the acting director of U.S. Citizenship and Immigration Services, also blamed House Democrats for poor conditions, saying they won't change asylum laws with "loopholes that you can drive a truck through," and that they won't fund more detention beds for migrants.

"You can complain about conditions," he said on Fox News Sunday. "Conditions are driven by those numbers. So, ultimately, they're complaining about the numbers that they're attracting here."

House Democratic leaders have yet to set any immigration bills on the July agenda.

Host Dana Perino asked Cuccinelli about his earlier comment that the border situation overall was pretty good given the circumstances, and he said he still believed that.

Cuccinelli said the Trump administration would like for a must-pass piece of legislation to include language to change the nation's asylum rules, but he demurred when asked specifically whether the White House would try to put such a change in a measure to raise the nation's debt ceiling.

"Certainly on the administration side, I can't imagine we would take any of those options off the table," he said.

Democrats, meanwhile, faulted Trump for not offering an immigration overhaul that could gain approval in a divided Congress.

"The president is acting like we are some weak, pathetic country," Sen. Michael Bennet of Colorado, a Democratic presidential candidate, said on Fox News Sunday. "We have the ability to treat human beings humanely. We have the ability to lead our hemisphere in a discussion about how to deal with this refugee crisis."

Sen. Jeff Merkley, D-Ore., said on NBC's Meet the Press that he is stunned when administration officials say that reports on the conditions at the border stations are unsubstantiated.

"I'm just like, 'What world are they living in?'" Merkley said. "From every direction you see that the children are being treated in a horrific manner. And there's an underlying philosophy that it's OK to treat refugees in this fashion. And that's really the rot at the core of the administration's policy."

He said the Homeland Security Department should improve conditions at holding facilities, hire more agents and immigration judges to process migrants at ports of entry, create a process for people from Central American nations to apply for asylum, and install permanent leadership at the department.

"While incompetence is rife in this administration, including at the Department of Homeland Security, there is clearly more at play here," Thompson said. "Since taking office, President Trump and his administration have ignored the rule of law and thrown well-established norms out the window in order to push their anti-immigrant agenda."

The New York Times' review of the operations of the Clint station, near El Paso's eastern edge, suggested that some children had no beds to sleep on and no way to clean themselves and that they sometimes went hungry -- and that the leadership of the U.S. Border Patrol knew about it for months.

Architects designed the Clint station as a type of forward base from which agents could go on forays along the border, a place where migrants would be detained for only a few hours of processing before being transferred to other locations.

But Clint is now known for holding what agents call unaccompanied alien children -- those who cross the border alone or with relatives who are not their parents.

An agent who has worked for the Border Patrol for 13 years confirmed reports by immigration lawyers that agents have asked migrants who are teenagers to help care for the younger children.

"We have nine agents processing, two agents in charge of [unaccompanied children] care, and we have little ones that need their diapers changed, and we can't do that," the agent said. "We do ask the older juveniles, the 16-year-olds or 17-year-olds, to help us out with that."

The number of children in the site is thought to have peaked at more than 700 around April and May, and it stood at nearly 250 about two weeks ago.

The Border Patrol's attempt to continue making room for new children at Clint, even as it was unable to find space to send them to better-equipped facilities, was a source of concern for many people who worked there.

"I can't tell you the number of times I would talk to agents and they would get teary-eyed," the agent said.

Mary Gonzalez, a Democratic state lawmaker in Texas who recently toured the Clint station, said that Border Patrol agents told her they had repeatedly warned their superiors about the crowded facility but that federal officials had taken no action.

Border Patrol leaders including Aaron Hull, the chief patrol agent of the agency's El Paso Sector, have disputed those descriptions, saying their facilities were rigorously and humanely managed.

Information for this article was contributed by Erik Wasson and Laura Davison of Bloomberg News; by Emily Cochrane, Simon Romero, Zolan Kanno-Youngs, Manny Fernandez, Daniel Borunda, Aaron Montes and Caitlin Dickerson of The New York Times; and by staff members of The Associated Press. 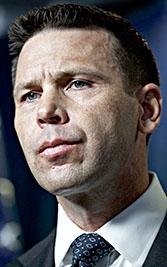 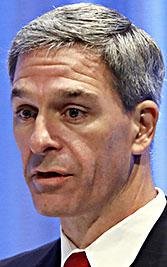