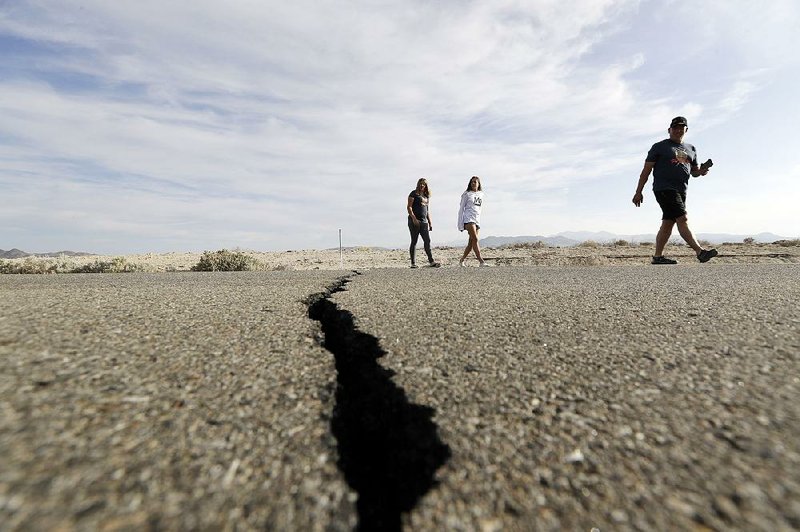 People walk next to a crack in the road Sunday caused by an earthquake as they cross California 178 near Ridgecrest.

LOS ANGELES -- The seismic one-two combination that hit Southern California last week left residents particularly unnerved because it robbed them of the sense that the worst is over.

After a 6.4-magnitude quake hit near Ridgecrest on Thursday, many expected aftershocks that would gradually decrease in strength and frequency. But when a 7.1-magnitude temblor struck Friday night, the shock quickly gave way to a question: What's next?

California Institute of Technology seismologist Lucy Jones predicted after the Friday night quake that there was an 8% to 9% chance of an even bigger earthquake within hours and days, alarming people from Las Vegas to Long Beach. The risk was reduced to 3% by Saturday afternoon, but by then, many residents had decided it was time to prepare.

"It's only a matter of time," said Kim Caldwell, 55, who has lived in Southern California all her life and has experienced numerous quakes. She said she and her husband have been lax about keeping their earthquake supplies stocked and up to date at their home in Santa Ana.

"I've grown up with these," she said of the quakes. "This is the first one that was a sizable earthquake where the second one was actually bigger. Normally they trail off."

Seismologists are constantly fighting against earthquake amnesia, trying to get people to grasp the severity and inevitability of the threat and to prepare. Many of them have never experienced a major quake, with the last devastating one occurring a quarter-century ago in Northridge.

Friday's quake was the strongest in Southern California since 1999. While it hit the Ridgecrest area hard, it didn't cause any notable damage in the Los Angeles area.

Quake preparations can include simple things -- like having earthquake kits and emergency plans ready -- or more expensive efforts such as acquiring backup generators and quake insurance and retrofitting buildings to better withstand shaking.

Less than 12% of California residents have insurance policies with quake coverage, according to state Department of Finance records.

Los Angeles, San Francisco and some other cities around California have required property owners to reinforce certain types of apartments that are vulnerable to collapse in a quake. Los Angeles has also required the strengthening of brittle concrete buildings.

But experts say many seismic safety gaps remain, such as bolting homes to foundations and dealing with chimneys that can collapse during heavy shaking.

If nothing else, the earthquakes of the past few days have many thinking about these issues.

"[I was] kind of a little shocked that there were two relatively large ones so close together and definitely started thinking about getting an emergency kit together," said Ivan Castro of Los Angeles' Koreatown neighborhood.

He was at a Dodgers game, sitting in the top deck two rows from the rim of the stadium, when Friday's earthquake hit. The crowd felt the rolling and then a jolt. "It's pretty scary, if I'm being honest," Castro said.

Jones said that since officials began measuring earthquakes in 1932, there have been 22 of a magnitude 6 or above. Only two of those -- including the one Thursday -- have been a foreshock to a larger one.

The last was in 1987, when a 6.2-magnitude quake struck south of the Salton Sea, followed by a 6.6-magnitude temblor 12 hours later.

"It was really similar, it's just that it was 30 years ago and nobody remembers," said Jones, who has led the battle against earthquake amnesia.

She said about one in 20 earthquakes are followed by a bigger one within 30 days.

In Kern County, which includes Ridgecrest, officials were relieved that the bigger earthquake wasn't devastating.

"Any time that we can go through a 7-point earthquake and we do not report a fatality, a major injury, do not suffer structure damage that was significant, I want to say that that was a blessing and a miracle," Kern County Fire Department spokesman Andrew Freeborn told reporters Sunday.

Officials from Ridgecrest in Kern County and from nearby Trona in San Bernardino County, both desert communities, worked Sunday to repair roads and restore utilities. Roads in Ridgecrest were in good shape, electricity was back on, the water system was working and buses are scheduled to run again today, said Jed McLaughlin, chief of police for the town of 28,000.

But many in Trona, a gateway for Death Valley, didn't have water, and crews were still patching up cracked roads in the town of fewer than 2,000 people.

Residents lined up for water that National Guard soldiers handed out at Trona High School.

"I just picked up a couple cases for me and my dog," said Jeb Haleman, adding that his home of 40 years escaped unscathed.

Supplies were briefly a concern for Paola Fernandez of Los Angeles. The 27-year-old went online Thursday after the first quake to research supply kits and disaster planning, and she carried a battery pack to keep her phone charged.

But she didn't think too much more about it, until the bigger quake struck as she was at a downtown Los Angeles bar during happy hour. The potential severity of a closer seismic rupture hit home.

"This morning I was like, I need to start making a plan. I need to figure out what I need to do," she said Saturday. "I need to prepare for any possibility of not being home or being stuck somewhere ... all these worst-case scenarios come to mind."

She identified an uncle in Colorado and made sure everyone in the family had his number. In case of an earthquake or emergency, members of her family would each individually contact him to let him know they were safe.

"I feel like definitely it's kind of like a wake-up call, it's the reminder that we live in California and this is something that happens and we've been kind of waiting for it for decades now -- the next big one," Fernandez said. "It just feels like the likelihood of it happening is bigger than it was before the Fourth of July.

"This is the geology of the land you live on, so you've just got to be careful." 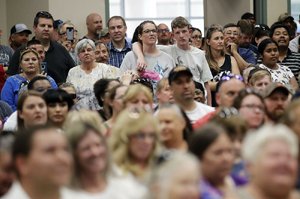 Photo by AP/MARCIO JOSE SANCHEZ
People in Ridgecrest, Calif., listen Sunday to an official during an informational meeting for residents following recent earthquakes.