State Archives director straps in for the long haul 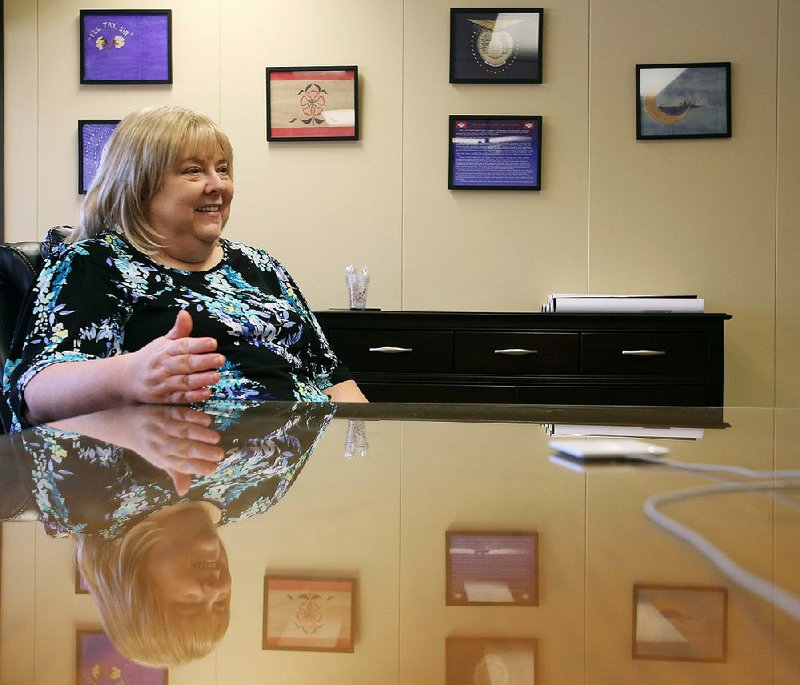 FILE — Wendy Richter, shown in her office at the state Capitol in Little Rock.

Wendy Richter has two pieces of hard-earned wisdom after her first year as the state historian and director of the Arkansas State Archives: wear seat belts and get regular mammograms.

Last month, Richter was at the end of Interstate 630 when her car was broadsided by another vehicle and rolled over 3½ times. She was trapped in her car, suspended upside down when emergency crews arrived to cut her out of the crushed vehicle.

"I would not have survived that without a seat belt," Richter said. "Now I'm a big proponent of seat belts. I tell everyone I see, 'Wear your seat belt.'"

Almost a year before the car accident -- which left her battered and bruised, but not badly injured -- Richter was diagnosed after a routine mammogram with one of the most aggressive forms of breast cancer.

"It's the kind that's called 'triple negative,' which means it's very difficult to treat," Richter said.

After 14 chemotherapy treatments, Richter is in the last phases of a radiation regimen of about 35 daily treatments.

"It's been hard. It's been really hard ... both from a physical and from an emotional standpoint," Richter said. "There were many days that I just couldn't go to work. I felt so bad physically. It's been very tough."

"They did catch it early and, as far as any of the tests reveal, it hasn't spread to any other part of my body," Richter said. "I have no family history of breast cancer. It was just a routine check. Just like the seat belts, I urge everyone to get a mammogram."

Richter -- who served previously from 2005-12 as director of the department before leaving to work as a library archivist at Ouachita Baptist University -- sighs deeply. Her voice is a hoarse whisper as she talks about the challenges of the previous year. When she took over in the spring of 2018, after the abrupt resignation of the previous director, Lisa Speer, the agency was in turmoil.

"It's been exciting and, at times, I must say, it's been frustrating," Richter said. "But overall, it's been really enjoyable to be back here in the State Archives again."

The archives agency -- which is responsible for collecting and preserving the state's official records and historical materials -- was created in 1905 by the General Assembly and was known as the state History Commission until 2016. That year, Stacy Hurst, the Arkansas Heritage director and state historic preservation officer, took the archives under her umbrella from the Department of Parks and Tourism.

This spring, Hurst was named by Gov. Asa Hutchinson as the secretary of the new Department of Parks, Heritage and Tourism as part of the governor's reorganization of state agencies to cut the number reporting to him from 42 to 15.

Hurst said Richter has grown the State Archives' impact by leaps and bounds in her first year.

One of Richter's first projects after coming on board was recruiting a volunteer troupe that gathers every Tuesday at the department's storage building next to the Arkansas Department of Heritage. The volunteers dig through boxes of records and extract names to be indexed and reproduced digitally into the archive's database. The database is searchable for free online.

The records -- which ranged from probate documents to court transcripts, some centuries old -- were obtained from various counties around the state. Richter and her team have spent many an hour on the road, responding to calls from county officials who are running out of room and resources to preserve the old records.

"We've done a lot of work with county governments and county officials," Richter said. "We're working with them to assist in their preservation efforts as well as receiving records from them for microfilming or for us to take ownership and preserve the records here."

Susan Boyle, former president of Friends of the Arkansas State Archives, a nonprofit organization that raises funds and awareness for the agency, said Richter has shown a lot of stamina in dealing with illness and injury and still keeping up with things at the archives.

"We have indexed all the names in early Hempstead County loose court records and have recently started on the same kinds of records from Cleveland County," Boyle said. "The names are being entered into a digital format that we hope will be online soon so researchers will find it easier to determine where their ancestors or the objects of their research were located and when."

In the past year, Richter has also obtained the U.S. District Court of Western Arkansas collection that features "hanging judge" Isaac Charles Parker, who served as a federal magistrate in Fort Smith from 1875 to 1889; directed the restoration of two early Arkansas state flags, including the original state flag that dates to 1912; scanned 40 newspapers, or about 103,000 pages, and sent them to the Library of Congress as part of the National Digital Newspapers Program and helped to start a traveling exhibit depicting World War I and this year's new exhibit "Arkansas Territory: The Wild Western Frontier."

The State Archives also saw an influx of upgrades to its computer systems, equipment and physical refurbishments thanks to a $450,000 grant from the Arkansas Natural and Cultural Resources Council. The department obtained new electronic microfilm machines to replace the hand-cranked devices and replaced smaller scanners with new, large-scale ones.

"We moved into the 21st century," Richter said. "We got things like that smart board and other furnishings. We did a complete remodel including new carpet. We hadn't had new carpet since 1979."

The latest project -- which will be unveiled later this month -- is the full, unlimited digitization of the entire archive collections. The new Arkansas Digital Archives will be equipped with pinpoint search capabilities so researchers such as genealogists, historians and the general public can digitally access centuries of documents and photographs of physical pieces in the archive's collections.

Some of the gems include a fully transcribed Civil War diary, two volumes of Arkansas Military Board records, the Quapaw Indian treaty from the 1820s and the state's original handwritten constitutions and secession documents.

"I really believe patrons will love this new website because the search feature is so easy to use. It will not only have thousands and thousands of records available for folks to see, but it will be so searchable," Richter said. "We can have all of those images pretty easily, but to be able to find the information, that's the key. To be able to offer that."

And her next project? It's child's play, she said.

The State Archives crew is creating an in-house and traveling exhibit focusing on the history of children at play. The project is expected to be completed by the fall, Richter said.

"We'll have photographs and images of children at play, whether it be riding bicycles, playing basketball outside or playing with dolls," she said. "We have a lot of artifacts that can support that kind of exhibit. We're excited to showcase some of those items and show what children 100 years ago, 130 years ago, and how it has changed in the last few decades."

In the meantime, Richter said she remains doggedly committed to her personal mission.

"Get your mammogram and wear your seat belt," she said.