PHOTO: Luxury castle in Northwest Arkansas, once listed for $9.7M, set to be auctioned 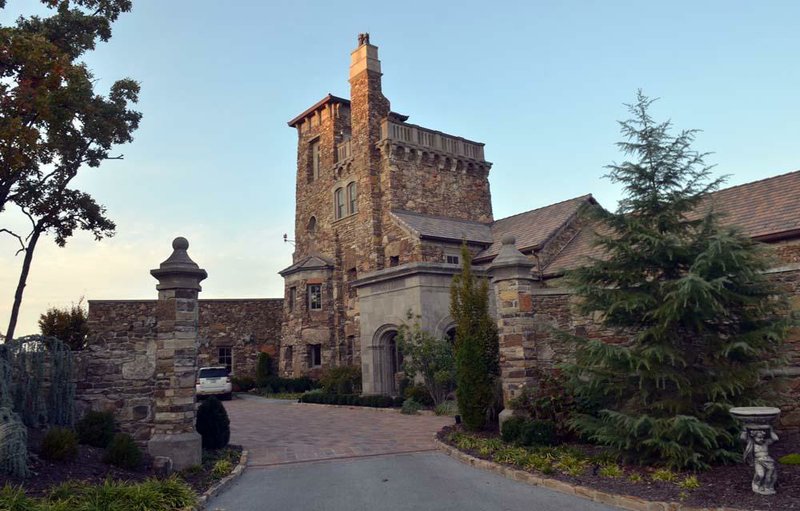 A hilltop castle in Northwest Arkansas, previously listed for sale for millions of dollars, is up for auction today.

The Dromborg is made up of 4,000 tons of stone and sits on 40 forested mountainside acres in Fayetteville, according to Katherine Hudson, the property's listing agent. It was completed in 2008.

Joan Johnson, who built the home with her husband, Bruce, described the Dromborg as a “a one-of-a-kind-house that anchors the south end" of Fayetteville.

“There just will never be another,” she said.

Concierge Auctions plans to auction the property over a three-day period: Bidding opens at 4 p.m. today and will end at the same time Thursday, said Mitch Abundis, a project sales manager for the company.

Prospective buyers can place their bids online, Abundis said. There is no required minimum bid for the auction, and the castle will be sold to the highest bidder, no matter how low the price.

"It's a very, very unique property," Abundis said. "It's a great investment opportunity, and with the auction it's an incredible chance to name your own price [for] a luxury home."

According to a website for the property, the castle stones were hewn and fitted together stone by stone, with solid oak, cherry and walnut throughout the building's 12,000-square-foot interior. The property's name comes from a Swedish word that roughly translates to "Dreams the size of mountains," Hudson, a real estate agent for Keller Williams Realty, said.

Bruce Johnson is Swedish, according to Hudson, and together he and his wife own White River Hardwoods in Fayetteville.

Hudson said she has been working with the Johnsons to sell it for about three years. The home has been on the market for about eight years.

This, Hudson said, is typical of properties of such size and value. A Facebook page for the Dromborg still lists the castle for $9.7 million.

Dromborg co-owner Joan Johnson said that, in spite of the time the castle has already been up for sale, she’s confident the auction will end with a buyer purchasing the property.

“That’s what we’re in it for,” she said. “I’m going to go live on the bike trail and ride my bike all over town, live like a college student.”

Print Headline: PHOTO: Luxury castle in Northwest Arkansas, once listed for $9.7M, set to be auctioned