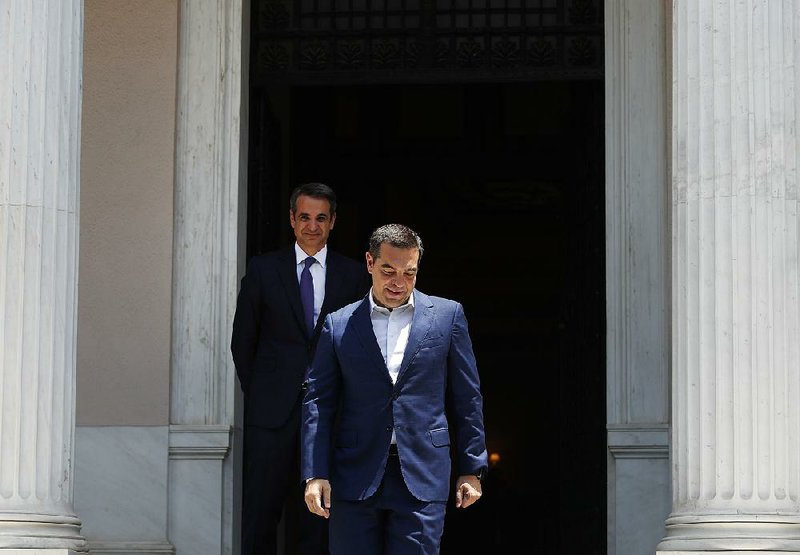 Mitsotakis, 51, defeated left-wing Alexis Tsipras, who led the country through the tumultuous final years of its international bailouts.

The son of a former prime minister and brother of a former foreign minister, Mitsotakis will have to move rapidly to deal with the myriad problems still plaguing the economy. He was elected on a pledge to cut bailout-era taxes and ease draconian budget targets set by Greece's creditors during the years of financial rescue.

Greece's creditors were expected to test that pledge. Dutch Finance Minister Wopke Hoekstra, arriving for a meeting in Brussels of finance ministers from the 19 European Union countries using the euro currency, said the new government has little room to maneuver because Greece's rescue program has already been negotiated with the other eurozone countries.

"Clear long-term agreements were made about setting [Greece's] budgetary house in order and pushing through reforms. It is based on a whole package and I assume that will stay intact," Hoekstra said.

"The people gave us a strong mandate to change Greece, and we will honor that commandment in full," Mitsotakis said after his swearing-in ceremony. "We will make the start today with hard work, with full confidence in our ability to respond to the circumstances."

As for Tsipras, he joins the ranks of prime ministers who lost elections after having to impose deep spending cuts and increased taxes on the country's citizens.

Transforming his Syriza party from a small radical left group to a party of power, Tsipras, now 44, won a January 2015 election on promises of repealing bailout austerity measures -- but he was soon forced to change tack. His government signed up to a third international bailout, with accompanying mandated changes, after tumultuous negotiations with creditors.

Though he won a subsequent election in 2015, Tsipras' standing had diminished after Greece's brush with bankruptcy and his government's acceptance of another bailout.

Greece's economy shrank by around a quarter, and poverty and unemployment levels soared during the country's nearly decade-long financial crisis. Although its finances have improved dramatically and the economy is expected to grow by 2.2% this year, it still has a long way to go.

The country's debt stands at about 181% of annual gross domestic product, compared to about 105% in the United States. Greece has also pledged to continue producing primary surpluses -- the budget excluding debt servicing -- of more than 3% of GDP for years to come to repay its debts.

Mitsotakis said Sunday that he would stick to his campaign pledges of lowering taxes, attracting investments and cutting through red tape to make Greece more business-friendly.

"New Democracy's clear victory in Greece's parliamentary elections yesterday will be welcomed by investors," said economics consultancy Capital Economics in a research note. "But it will not be a game changer for the economy, not least because the government will still be constrained by its membership of the single currency and its 'surveillance' agreement with the EU."

That caution was evident in the Athens Stock Exchange, which closed down 1.8% following successive increases ahead of the widely anticipated election result. Greek borrowing rates continued to fall with the 10-year government bond yield hovering just above 2%.

Mitsotakis will also have to contend with pension increases and other benefits the outgoing government granted ahead of European elections in May -- benefits which European creditors had warned could make Greece's fiscal targets hard to meet.

"He will soon be confronted with the fiscal impact of the last measures approved by the outgoing Tsipras government," said Paolo Pizzoli, a senior economist at ING.

Information for this article has been contributed by Derek Gatopoulos, Raf Casert and staff members of The Associated Press.