GIRLS GOLF: Bentonville's Thomas is fourth after first round 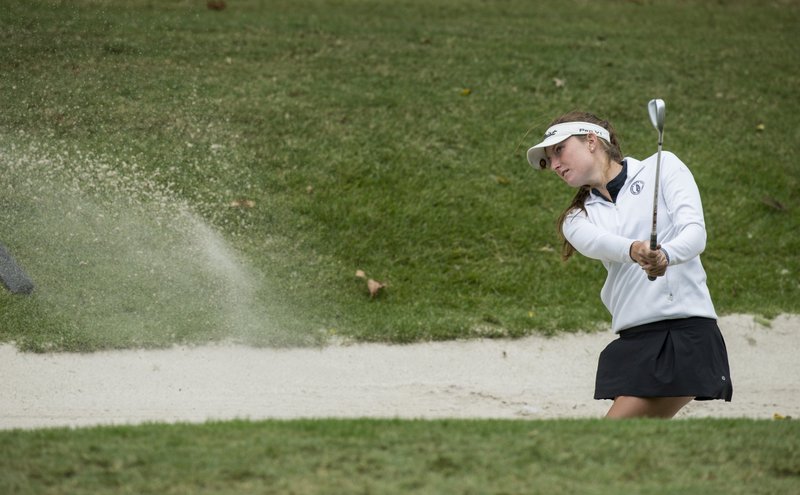 Lilly Thomas of Bentonville hits from a bunker on No. 18 Wednesday, Sept. 26, 2018, during the class 6A girls golf state championship at Shadow Valley Country Club in Rogers. ( Ben Goff)

Thomas, the Northwest Arkansas Democrat-Gazette's girls golfer of the year, shot a first-round 4-under par 66 and is currently in fourth place out of 144 participants. Three girls -- Phoebe Brinker of Wilmington, Del.; Sara Im of Duluth, Ga.; and Yuka Saso of the Philippines -- share the lead at 5-under 65.

Thomas bounced back from a bogey on the par-3 No. 11 with four birdies over the next six holes to finish with a 32 for the back nine, where she started her round. She then went to 4-under with a birdie on No. 1 before she had a double bogey two holes later.

Thomas, however, made up for that with a birdie on No. 4, then she picked up a birdie on No. 8. She just missed a birdie putt on No. 9 that would have given her a share of the lead and finished with a par.

Thomas, who signed a national letter of intent to play at Tulsa, will tee off at 12:20 p.m. local time. The field will be cut to the lowest 70 scores plus tie after the second round is completed.