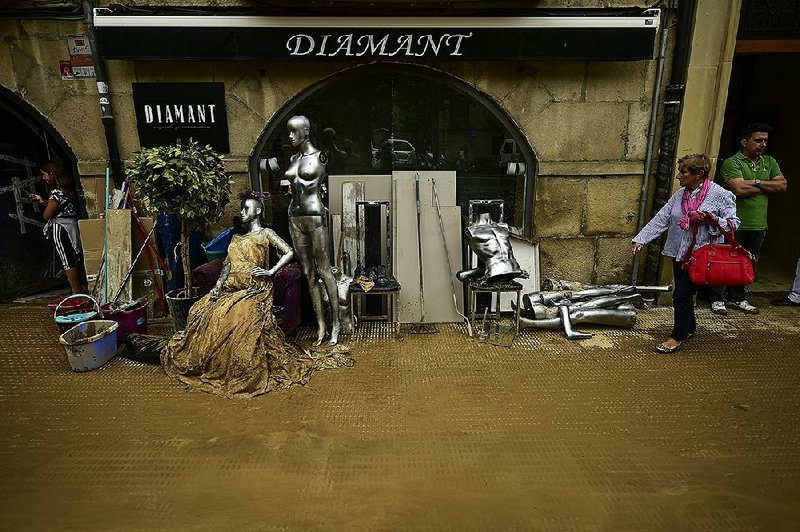 A pedestrian on Tuesday passes a shop damaged by the heavy rainfall in Tafalla, Spain.

MADRID -- Firefighters on Tuesday found the body of a driver whose car was swept away by flash flooding after sudden downpours, authorities in northern Spain said.

The Monday evening rainfall, at times accompanied by hail, led to road closures and power cuts. In the northern town of Tafalla, two rivers overflowed.

Social media video provided by the regional police and other users showed how strong currents dragged away vehicles and trash containers.

Access to the town of 10,000 wasn't cleared until the early hours of Tuesday, the government of the Navarra region said, adding that a major railway line also had been disrupted.

In nearby Pamplona, a Monday evening bullfight during the city's famous San Fermin festival was suspended because of the rain.

THE HAGUE, Netherlands -- Inspectors with a global agency to monitor for chemical weapons say they have discovered traces of what they believe to be a byproduct of a nerve agent or poison gas at a Syrian research facility.

Member states of the Organization for the Prohibition of Chemical Weapons voiced concern Tuesday that Syria may still possess such weapons.

Canada's envoy to the organization, Sabine Nolke, said in a speech to the meeting that the discovery, and reports that Syria destroyed equipment and munitions that had been earmarked for further assessment, add to "growing evidence of deliberately false declarations by Syria, destruction of possible evidence, and the alarming likelihood that Syria continues to possess Schedule 1 chemicals."

The government in Damascus did not immediately respond to a request for comment.

MEXICO CITY -- President Andres Manuel Lopez Obrador said Tuesday that only about 60% of Mexico's federal police are passing physical and background exams to join the new National Guard, despite the fact that they're considered the elite of law enforcement personnel.

Federal police, who had better pay, training and education standards than other police, have protested recently against being reassigned to the militarized National Guard.

The police say they're being ill-treated and will lose seniority and benefits. They also have objected to loss of pay and poorer living conditions, to which the soldiers and marines who have joined the force are accustomed.

Lopez Obrador has accused federal police of being unfit and corrupt, noting that 90% of military personnel had passed tests to join the new force.

The government said it has reached a deal to let federal officers retire or join other law enforcement agencies if they don't want to go to the National Guard or are rejected.

TOKYO -- Japan's prime minister said Tuesday that the government will abide by a court ruling ordering it to compensate former leprosy patients' families over a lengthy segregation policy that severed family ties and caused long-lasting prejudice.

Prime Minister Shinzo Abe said the government will not appeal the Kumamoto District Court's decision in June awarding compensation to more than 500 plaintiffs for financial and psychological suffering over discrimination in education, jobs and marriage.

"The families have already gone through indescribable hardships, and we can't prolong that any further," Abe told reporters. He said part of the ruling was not acceptable to the government, but "it is an exceptional case, and we decided not to appeal."

The 561 plaintiffs demanded $52,000 each for their suffering. The court ordered the government to pay $3.4 million in damages to 541 of the families, an average of about $6,300 each. It said the government failed to end segregation until 1996, decades after leprosy, or Hansen's disease, became curable. 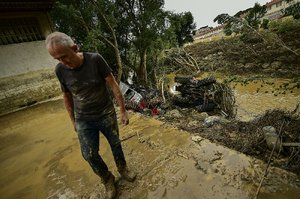 Photo by AP/ALVARO BARRIENTOS
A man walks past a car and tractor Tuesday in Tafalla in northern Spain, where the vehicles were swept away in flash flooding Monday night. A motorist whose car was swept away was found dead Tuesday. An intense storm caused road closures and knocked out power in parts of the country, and a bullfight at Pamplona’s famous San Fermin festival had to be suspended.