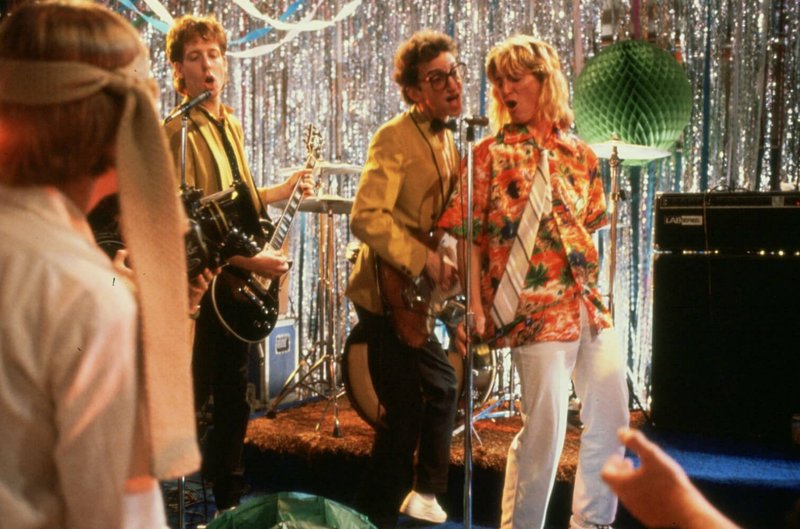 Spicoli (Sean Penn) from the 1984 film, Fast Times at Ridgemont High, seen here with the the prom band Reeves Nevo &amp; the Cinch that he almost had to miss, won't be there, but the cool '80s vibes will be when the Downtown Little Rock Partnership throws and '80s mall party in the city's Main Street Mall.

It's time to break out the Jordache jeans and tease the hair sky-high because downtown Little Rock's Main Street Mall is getting sucked into a time warp.

The Downtown Little Rock Partnership, which began in 1984, is hosting a gnarly celebration of the decade.

Actually, according to Downtown Little Rock Partnership communications director Anderson Penix, the mall is already something of a time warp. The mall, which functioned briefly as a shopping mall in the 1980s, is now home to the partnership headquarters and many elements from those early days still remain.

"Every time we walk into the mall, we see these aesthetic '80s elements," he says. "Some neon elements. Some glass block elements. We were thinking this would be a great venue for a nostalgic '80s party."

They're going all-out with the theme. Local group Dazz & Brie will host the activities, giving out prizes, while DJ G-Force will play '80s tunes, accompanied by music videos. Entertainers from Sway Night Club will head up the lip sync contest and Ballet Arkansas will perform.

There will also be a retro arcade with at least five quarter-free machines.

In keeping with the '80s theme and the idea of time travel, there will also be two big nods to the 1984 hit, Back to the Future. A Marty McFly impersonator will mingle with the guests and Doc Brown's DeLorean will be inside the mall for pictures and an up-close look.

Of course, costumes are encouraged and there will be prizes for best costumes, so guests may want to dig out their best jean jackets and frosted lipstick.

Regular tickets are $20 and include one free drink. Those with VIP tickets get two free drinks and access to the upper level and free food from Samantha's Tap Room. Slick's will be on hand selling burgers and other food on the lower level.

Guests don't have to be able to remember the '80s, but they must be 21 or older.

Ultimately, the party will not only celebrate the partnership and a "totally awesome" decade, but it will introduce residents to a fun, unfamiliar part of downtown.

"It goes to our purpose in general, to highlight the fun that can be had downtown," Penix says. "To bring people into a space they've never been before and expand their view of the city. It is a unique party and I really think people are going to have fun with it."