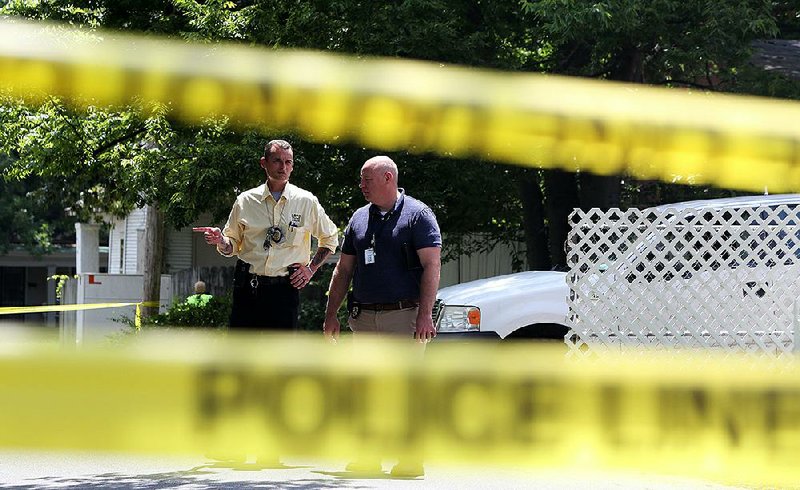 Little Rock police detectives investigate at 15th and Elm streets Monday after a death that authorities said is being regarded as suspicious. ( Jeff Mitchell)

Little Rock police Wednesday charged a 62-year-old man in the slaying of a man whose body was found Monday in a dilapidated residence's backyard, a police spokesman said.

The owner of the dilapidated house at 1501 S. Elm St. reported finding the body when picking up some belongings from the house, Barnes said.

Price's body was lying between the house and a garage, Barnes said.

Price had been injured in such a manner that an autopsy at the state Crime Laboratory determined was consistent with homicide. Barnes said Tuesday that he could not specify the nature of the injuries.

On Monday, the death was labeled suspicious before the Pulaski County coroner's office took Price's body to the Crime Lab, according to previous releases.

Barnes said Price's body had been in the abandoned home's backyard "for some time" before it was discovered Monday.

Police did not release any information about how Johnson was connected to Price.

Johnson has been convicted five times since 1992 on charges of possession of an instrument of crime, criminal trespass, third-degree domestic battery, obstructing government operations and first-degree battery.

On his first-degree battery charge in 2016, Johnson was sentenced to three years of probation, which Wednesday's first-degree murder charge appears to violate.

Court records indicate that Price lived in Jonesboro between 1999 and 2018. Whether he still lived there at the time of his death was unclear.