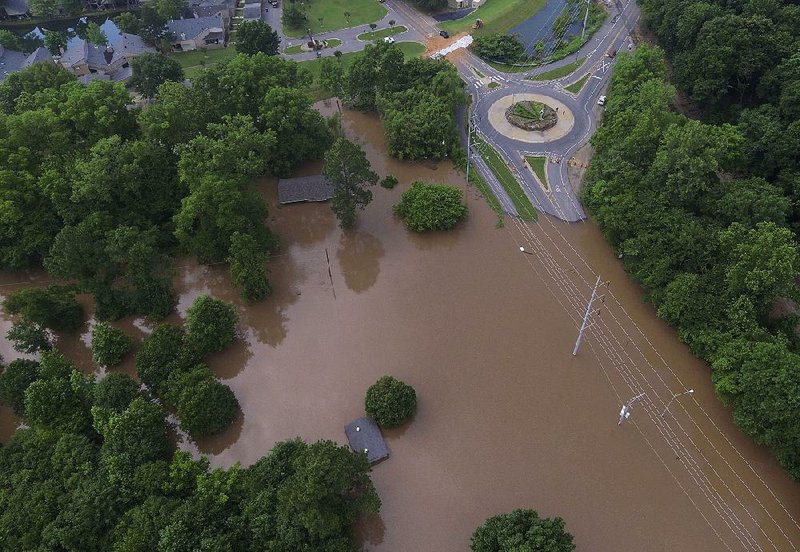 In this file photo Arkansas River floodwaters flow near the roundabout at Rebsamen Park Road and Riverfront Drive in Little Rock on Tuesday afternoon. The road is barricaded to keep out motorists for their own safety. ( Arkansas Democrat-Gazette / Staton Breidenthal)

The Riverdale Levee Improvement District's board of commissioners Thursday approved a $2 million line of credit to cover expenses related to recent flooding in the Little Rock area.

For a few weeks when the water was especially high on the Arkansas River, the levee district conducted additional engineering, construction and pump work to ensure that the homes and businesses within it were protected from flooding.

Commission chairman Mike Myers said the funding will cover the levee district's bills until it gets reimbursed by the Federal Emergency Management Agency and the U.S. Army Corps of Engineers.

"It's a bridge until we find out what we're going to get," Myers said.

The Arkansas River crested at 29.71 feet on June 5, the highest river level in the Little Rock area since 1945, according to weather records. Riverdale and other low-lying neighborhoods were among the places most affected by floodwaters in the city.

The levee district previously had a $100,000 line of credit. Levee districts are funded by a tax on businesses, developments and homeowners within the district.

The line of credit with Malvern National Bank was approved at a special meeting. Commissioners typically meet on the second Friday of the second month of every quarter. Two of the three commissioners were present Thursday, and both approved the funding measure.

Myers, who has served on the board for 10 years, said this year's flooding was the worst he'd seen in the district. Heavy rain -- 3 inches in two hours one evening -- was also a factor.

During the high water event, sandbags were placed along the levee near the Cantrell Road intersection, and the water never topped the levee, Myers said.

The levee was built to allow for the development of the Riverdale area, home to organizations including Winrock International and Arkansas Blue Cross and Blue Shield, as well as several apartment complexes. The levee also encompasses the Canal Pointe development, which has a marina.