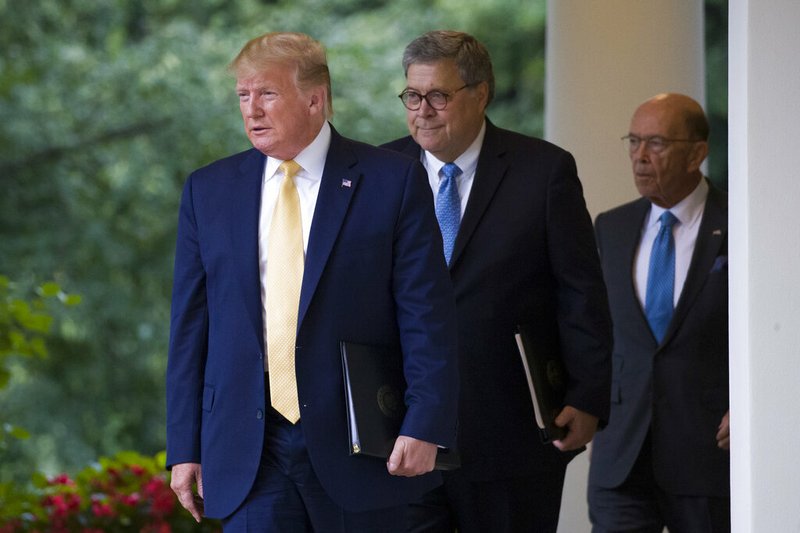 WASHINGTON -- President Donald Trump on Thursday abandoned his attempt to place a question about citizenship on the 2020 census and instructed the government to compile citizenship data instead from existing federal records.

Trump announced in the Rose Garden at the White House that he was giving up on modifying the census two weeks after the Supreme Court rebuked the Trump administration over its effort to do so. Last week, Trump had insisted that his administration "must" pursue that goal.

"We are not backing down on our effort to determine the citizenship status of the United States population," Trump said Thursday.

He said he would be signing an executive order directing every federal department and agency to provide the Commerce Department with all records pertaining to the number of citizens and noncitizens in the country, including the Department of Homeland Security and the Social Security Administration.

The Census Bureau already has access to Social Security, food-stamp and federal prison records, all of which contain citizenship information.

Trump, citing Census Bureau projections, predicted that using previously available records, the administration could determine the citizenship of 90% of the population "or more."

"Ultimately this will allow us to have a more complete count of citizens than through asking the single question alone," he said.

"The only people who are not proud to be citizens are the ones who are fighting us all the way about the word 'citizen,'" he added.

The Trump administration has argued that including the question on census forms is an important part of its efforts to protect the voting rights of the nation's residents who are members of minority groups, but the Supreme Court rejected that justification as a "contrived" pretext.

Government experts have predicted that asking the question would result in many migrants refusing to participate in the census, leading to an undercount of millions of people. That could reduce Democratic representation when congressional districts are allocated in 2021 and affect how hundreds of billions of dollars in federal spending are distributed.

In a statement, a Justice Department spokesman said the department would "promptly inform the courts" that the government would not seek to include a citizenship question in the census.

The Census Bureau has said it could produce better citizenship data without adding the question.

The bureau had recommended combining information from the annual American Community Survey with records held by other federal agencies that already include citizenship records.

But Commerce Secretary Wilbur Ross, who oversees the Census Bureau, ultimately rejected that approach and ordered the citizenship question be added to the census.

Some Democrats complained Thursday that the public debate itself might have sown fear among migrants in the country and could taint their view of the census, even if it does not include a citizenship question.

Following Trump to the Rose Garden podium, U.S. Attorney General William Barr said that any administration move to modify the census would have survived legal review, but only after a lengthy process that would have jeopardized the administration's ability to conduct the census in a timely manner.

"Put simply, the impediment was a logistical impediment, not a legal one," Barr said. "We simply cannot complete the litigation in time to carry out the census."

"As shocking as it may be, far-left Democrats in our country are determined to conceal the number of illegal aliens in our midst," he said. "They probably know the number is far greater, much higher than anyone would have ever believed before. Maybe that's why they fight so hard. This is part of a broader left-wing effort to erode the rights of the American citizen and is very unfair to our country."

Dale Ho, the director of the American Civil Liberties Union's Voting Rights Project, said in a statement that Trump's "attempt to weaponize the census ends not with a bang but a whimper."

"He lost in the Supreme Court, which saw through his lie about needing the question for the Voting Rights Act," said Ho, who argued the Supreme Court case. "It is clear he simply wanted to sow fear in immigrant communities and turbocharge Republican gerrymandering efforts by diluting the political influence of Latino communities."

"Some states," he said, "may want to draw state and local legislative districts, based upon the voter eligible population."

If people ineligible to vote were evenly distributed, the difference between counting all people and counting only eligible voters would not matter. But demographic patterns vary widely.

Places with large numbers of residents who cannot vote -- including children, immigrants who are in the United States legally but are not citizens, unauthorized migrants and people disenfranchised after committing felonies -- on the whole tend to be urban and to vote Democratic. Districts based on equal numbers of eligible voters would generally move political power away from cities and toward older and more homogeneous rural areas that tend to vote for Republicans.

"This news conference was total propaganda," said Vanita Gupta, the former head of the Justice Department's civil-rights division and the chief executive of the Leadership Conference.

"The government already has access to all of this citizenship data through administrative records, and already studies it," Gupta said. "Trump just didn't want to admit defeat."

Information for this article was contributed by Katie Rogers, Adam Liptak and Michael Crowley of The New York Times; and by Jill Colvin, Mark Sherman, Zeke Miller, Darlene Superville and Matthew Daly of The Associated Press.