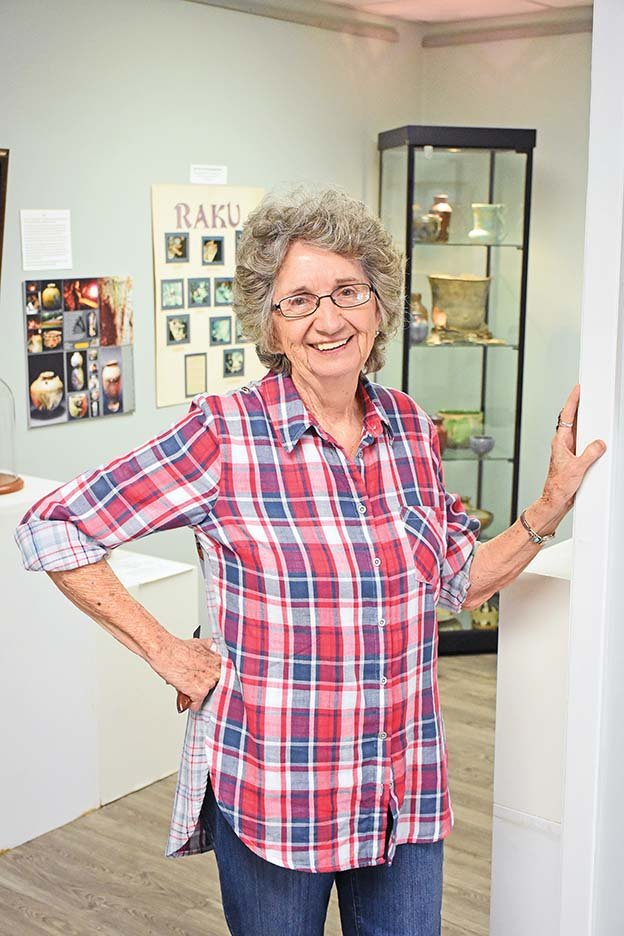 Farrell Ford, longtime artist and educator, is featured in a one-woman exhibit of her work at the Arkadelphia Arts Center. Her work includes paintings, pottery, crafts and fiber art. The exhibit — The Road From Northside to Self-Actualization: A Retrospective Exhibition of the Work of Farrell Ford — will be on display through Aug. 30. ( Staci Vandagriff)

ARKADELPHIA — Farrell Ford likens herself to the stuffed rabbit that becomes real in the children’s book The Velveteen Rabbit.

“I have ‘become,’” Ford said, smiling, as she pointed to a quote from the book by Margery Williams that begins, “You become.” That quote is displayed prominently in the art exhibit that depicts a sampling of Ford’s work from the past 60 years.

The Clark County Arts and Humanities Council is hosting the one-woman art exhibit — The Road From Northside to Self-Actualization: A Retrospective Exhibition of the Work of Farrell Ford — through Aug. 30 at the Arkadelphia Arts Center, 625 Main St. Gallery hours are 10 a.m. to 5 p.m. Tuesday through Friday. There is no admission charge, and Ford may be found there most days, but especially on the second and fourth Thursdays during art classes.

“At 40 years old — halfway through my probable life span — I realized I was an artist, self-taught from real-world experiences,” said Ford, 86. “My art has had many lives, changing direction and focus through the years, as can be seen in this exhibition. Painting, pottery, fiber, stained glass and more have been experiences that are now a part of me.

“At this time in my life, I know that now I am who I am and was meant to be. I have ‘become,’ and I am content with my self-actualization.”

Ford was born in Griffithville in White County but was raised in a small community known as Northside, “across the bayou from Des Arc” near the White-Prairie County line, she said. The only child of the late Bill and Mildred Vance, she went to school in Des Arc.

“Looking back, I’ve always been artsy. I liked to draw as a kid,” she said.

“Before entering the first grade in 1939 in a one-room country school, I was trying to ‘write my letters’ by drawing them,” she said. “There are memories of drawing, but no records, until the ‘blue composition books’ of the seventh grade that I have kept through the years.”

Those blue composition books are included in the art exhibit.

“There was no art taught in school when I was growing up,” she said. “Anytime a teacher said, ‘Draw this,’ I clapped my hands.”

She met her husband, James “Doc” Ford, in the second grade at Des Arc, and they both graduated from Des Arc High School in 1951. They married in 1952 and lived in Monticello, where Doc was enrolled at Arkansas A&M College (now the University of Arkansas at Monticello). After he graduated, they moved to Fayetteville, where Doc continued his education and Farrell continued to work in various jobs.

It wasn’t until they moved to Arkadelphia that Ford had any formal art training. She received her Bachelor of Science in Education degree in art in 1971 at Henderson State University, then began teaching art at what was then L.M. Goza Junior High School.

Farrell returned to Henderson later and earned a master’s degree in guidance counseling, leading the Arkadelphia School District’s counseling program until she retired in 1991. She continued to make art throughout her career in education. She then ran a craft business with her husband, who is now retired after 37 years in school administration.

The Fords have four children — William “Rocky” Ford of Benton; Rita Earles and Jennifer Holbrook, both of Arkadelphia; and Mary Jo Cooley of Kyle, Texas. The couple also have five grandchildren and seven great-grandchildren.

Farrell returned to fine art in 2001. Her involvement in the local arts community helped lead to the founding of the Caddo River Art Guild in 2006; she continues to serve the Guild as president. In 2010, she helped revive the Clark County Arts and Humanities Council, serving as its executive director until September 2018.

Farrell’s volunteer work with the arts center also led to the creation of a city mural that was funded with a grant of more than $21,000 from the Mid-America Arts Alliance.

In 2013, Farrell was recognized for her contributions to the arts by the Arkansas Arts Council and then-Gov. Mike Beebe at the annual Governor’s Arts Awards. She received the Judges Special Recognition Award at that ceremony.

“The most gratifying thing about my work in all of this is finding artists who don’t know they are artists,” Ford said, smiling. “I am also so grateful to all the volunteers who give their time to showcase the works of these artists here at the arts center. I could not have done anything without these volunteers.

“I know now that I am right where I need to be,” Ford said. “I am the velveteen rabbit. … I have become.”

Katherine Strause, artist and chairman of the HSU art department, said she met Ford when Strause began working at HSU in 2007.

“At that time, she was working every angle to get an Arkadelphia Arts Center in place,” Strause said. “She spearheaded the move to reinstate the Clark County Art Council, both of which were no small feats. Let’s not forget the studio tour that [the Caddo River Art Guild] puts together every year.

“Farrell is a dynamo who will never take no for an answer,” Strause said. “She’s a working artist who has been making beautiful art for decades. I love her and admire her more and more every year.”

Ford said she hopes to relax some now that she has retired from the local arts council.

“I will continue to paint,” she said. “Oil paint is my favorite medium, but I enjoy it all. I still have my studio at home.

“And the Caddo River Art Guild is gearing up for its 2019 Round About Studio Tour in October,” she said. “I am sure I will be involved with that. We are adding crafts this year.”