Big ventures in a small town: Chad Gallagher and others make up a new generation of entrepreneurs that are re-educating De Queen 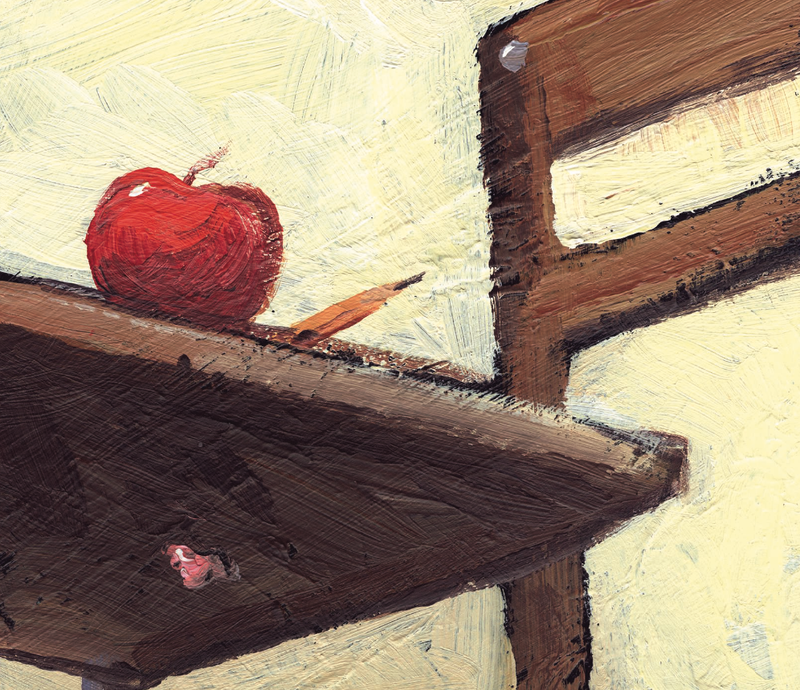 It's the lunch hour in downtown De Queen, and things are busy at Stilwell's Restaurant. In the back room of an old building that looks out onto the downtown square, students from Legacy Academy are eating lunch and waiting to hear from a speaker.

The boys are wearing ties, reminding me of the boys at Little Rock Catholic High School, where my oldest son graduated. I wasn't expecting this in De Queen, though.

In 2005, Chad and Jessica Gallagher were homeschooling their daughters when they began talking about creating a school that would teach what's known as a classical Christian curriculum. They had read about a movement that began in 1980 when parents in three states started such schools and launched the classical Christian movement. At the time, none of them knew the other schools existed.

In 1991, Douglas Wilson, founder of Logos School, published a book titled Recovering the Lost Tools of Learning. During the next few years, more than 100 classical Christian schools were formed. In 1994, the Association of Classical Christian Schools began. ACCS now represents more than 280 private schools, including Legacy Academy.

The Gallaghers launched their school in the fall of 2007 with a daycare operation, a pre-kindergarten program and a kindergarten class. They've been adding a grade a year since then. The school teaches everything from Latin to playing the violin. Students are required to read 150 volumes of classical literature over the course of several years.

"We were told from the start that it would be at least 10 years before most people would start taking us seriously," Chad Gallagher says. "We added sports teams last year. We'll graduate our first high school students next year. We're fully established now."

Gallagher also owns the restaurant, which opened its doors in a renovated building on Oct. 1, 2009.

"I spent two years reading everything I could find about the restaurant business," he says. "I never start anything without doing the proper research. We make everything fresh at Stilwell's. That includes the sauces and the salad dressings. The desserts are made from scratch, and there's a premium coffee bar."

Gallagher was elected mayor of De Queen in 1998 at age 22. He was one of the youngest mayors in the country when he took office. He left the job after a four-year term but is still driven by his desire to revitalize this town near the Oklahoma border.

He views the restaurant and the private school as amenities that can help draw residents to the Sevier County seat. During a period when most towns in south Arkansas are losing population, De Queen has seen its population increase from 4,633 in the 1990 census to an estimated 6,600 residents these days.

The majority of new residents are Hispanic. They came for jobs in area poultry processing facilities and other plants. De Queen is the largest city in Arkansas with a majority Hispanic population, which Gallagher estimates is at around 53 percent.

Stilwell's Restaurant is named for Arthur Stilwell, a Kansas City businessman who wanted to build a railroad from Kansas City to the Gulf of Mexico. De Queen is a byproduct of that railroad.

"Stilwell ran out of money in the Panic of 1893," writes Billy Ray McKelvy, a former De Queen mayor. "With no investment capital to be found, he made a trip to Holland, where he met Jan de Geoijen, a coffee merchant. With de Geoijen's help, Stilwell sold an additional $3 million worth of stock, enabling him to finish the railroad. In Sevier County, the railroad ran through a settlement called Hurrah City. Stilwell was also president of Arkansas Townsite Co., a Missouri corporation that owned land around the settlement. The company sent in surveyors to mark off blocks, streets and alleys for the town.

"On opening day, April 26, 1897, a large crowd showed up and bought the lots, which were priced at $25 and up. This town was named De Queen, an Americanized rendering of de Geoijen's name. De Queen was formally founded on June 3, 1897, when a petition signed by 42 residents asked Sevier County Judge Ben Norwood to incorporate the new town. ... The railroad offered transportation for residents of the area and a way to ship crops to distant markets. Freight shipped from De Queen by train included peaches, vegetables, lumber, honey and barrel staves."

On Oct. 1, 1899, a fire destroyed wooden buildings containing 54 businesses. The Kansas City, Pittsburg & Gulf Railroad went into receivership the following year but was reorganized as the Kansas City Southern Railroad.

The railroad built a roundhouse and shop at De Queen in 1909, bringing jobs to the area. The timber industry was thriving by then.

"Herman Dierks of Iowa, the son of a German immigrant, purchased the Williams Brothers sawmill and timberlands in De Queen in 1900," McKelvy writes. "After a fire destroyed the first mill, the Dierks Lumber & Coal Co. built another mill and began acquiring more timberland. It also practiced selective cutting and reforestation, buying up unproductive farms and replanting them with pine trees.

"The company developed the short-line De Queen & Eastern Railroad, chartered in 1900, to transport timber to mills. It even provided some passenger service. The line was pushed east to Dierks in Howard County and in 1921 connected with the Texas, Oklahoma & Eastern Railroad to Valliant, Okla. The Dierks Lumber & Coal Co. provided employment to thousands of residents of southwest Arkansas and southeast Oklahoma. It also operated a company store in downtown De Queen."

The poultry industry began to grow alongside the timber industry, leading to the Hispanic influx.

Chad Gallagher is an unlikely small-town savior. He was born at nearby Winthrop. His father was killed in an automobile accident when Gallagher was 2. His mother remarried, divorced and moved with her son to a rough trailer park in Houston. There was little money. Gallagher often found himself wandering the streets of the city alone.

"I was the kid at school who smelled like cigarette smoke, wore cheap clothes and always needed a haircut," Gallagher says. "It wasn't easy."

His greatest inspiration was a teacher named Eva Wood, who insisted he go to church with her.

"Each Sunday morning, she would pick me up at the trailer park and then take me back home after church," Gallagher says.

His paternal grandfather invited him to work on the farm at Winthrop the summer Gallagher turned 14. It was a welcome escape from the big city. At the end of the summer, Gallagher asked to stay. He attended the ninth through 12th grades at Winthrop.

"I would milk cows in the morning before going to school," he says.

In 1992, when Gallagher was 16, he became interested in the U.S. Senate campaign of a Southern Baptist minister from Texarkana named Mike Huckabee. Gallagher volunteered for the campaign. Huckabee, a Republican, lost that fall to Democratic incumbent Dale Bumpers.

Bill Clinton was elected president and resigned as governor, opening the door for Jim Guy Tucker to move up from lieutenant governor to governor. That necessitated a special election in the summer of 1993. Huckabee was the Republican candidate and won in a tight race against Democrat Nate Coulter.

Gallagher, who had graduated from high school that May, had again volunteered to work on the campaign. He spent nights sleeping on the couch of Huckabee's home.

"I did everything from delivering signs to stuffing envelopes," he says.

Gallagher entered college at Huckabee's alma mater, Ouachita Baptist University at Arkadelphia, in the fall of 1993 and graduated in the spring of 1996. He met his wife, a De Queen native, while serving as a church youth minister. They were married in November 1996 and opened a Christian bookstore at De Queen. Gallagher was elected mayor in 1998. After his term ended in January 2003, he joined Huckabee's staff in the governor's office in Little Rock.

"I figured I could start a career as a Republican political operative after the governor left office," Gallagher says. "After a while, I realized that I had defined myself far too narrowly. I found that I really had an interest in business, in historic preservation and in helping small towns survive. People told me that you couldn't run a successful consulting business from De Queen, but I decided to try. I opened my office in February 2007. I only billed $40,000 that first year, but doors started opening."

Huckabee ran for president in 2008. Gallagher was involved in the campaign, which allowed him to make contacts across the country. The client list for Legacy Consulting, which also has an office in downtown Little Rock, now includes names such as country music star Loretta Lynn.

You can add to the consulting firm, the restaurant and the school another venture. It's a ranch on the edge of town known as Magnolia Meadows. Gallagher is raising Devon cattle on 277 acres and sees tremendous potential for supplying grass-fed beef to restaurants and individual consumers in the booming Dallas-Fort Worth market.

The Devon is an ancient breed of cattle from the southwestern English county of Devon. The cattle are red in color.

"The beef we produce is not only grass-fed, it's also grass-finished," Gallagher says. "That means that these cattle are never fed grain in feedlots. Dallas is less than four hours away, and the demand for this kind of beef there is high. There's a lot of potential business for producers in this part of Arkansas."

Gallagher wants to help other ranchers in rural southwest Arkansas sell beef in Texas. He says his consulting work has taught him how to target audiences and use email lists to find buyers who will order the beef online.

"We have to start re-inventing the economy in our small towns," Gallagher says. "That's what Jessica and I are trying to do in De Queen."

There's even a nonprofit community development organization known as Legacy Initiatives. Gallagher has worked closely with Dr. Jason Lofton, a De Queen medical doctor, to begin projects in the areas of health care, historic preservation and the arts.

De Queen has been in the news in recent months because its hospital, the De Queen Medical Center, closed. There's now an effort to establish a publicly owned hospital.

Legacy Initiatives is also helping develop an arts center downtown in a building that once housed a hardware store, build bike trails at De Queen Lake and restore a former Presbyterian church. The organization even sponsors an annual health fair at which more than 1,000 people are screened.

"We must develop a new generation of entrepreneurs," Gallagher says. "I'm trying to show that it can be done in a place like De Queen. Small towns have my heart."

Print Headline: Big ventures in a small town: Chad Gallagher and others make up a new generation of entrepreneurs that are re-educating De Queen