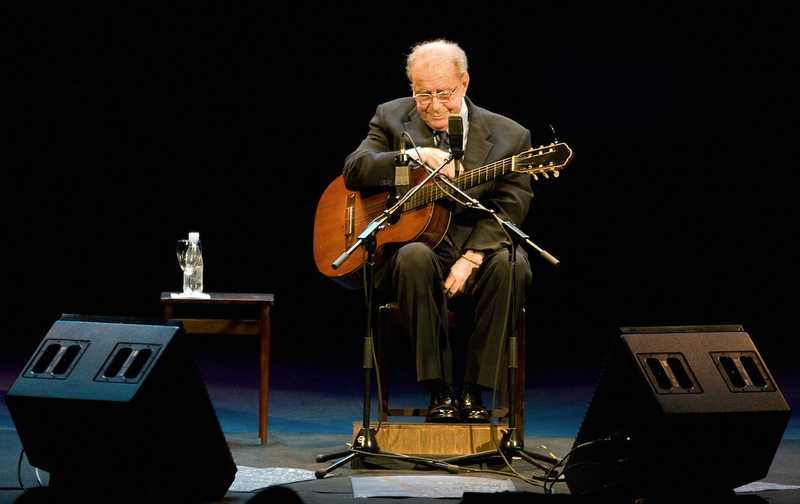 The British Invasion gets all the ink, but in 1964, as the Beatles were upending pop culture, a record by a jazz hit-maker and a Brazilian bossa nova innovator stormed the Grammy Awards and the American charts.

Called Getz/Gilberto and featuring the breakout hit "The Girl From Ipanema," the collaborative effort won the album of the year trophy and turned saxophonist Stan Getz and Joao Gilberto, the intensely private Brazilian singer-guitarist, into an unlikely hit-making duo.

Gilberto's death at age 88 was announced July 6 through the Facebook page of the musician's son, João Marcelo Gilberto. The son offered no details on Gilberto's death.

Over a seven-decade career, the guitarist's quick, liquid acoustic chords hit with a smooth but percussive energy, and coupled with his subtly expressive voice, transformed the music of his country and helped spread the sound across the world.

One of the most influential musicians of the 20th century, Gilberto and his peer and collaborator Antonio Carlos Jobim helped create and popularize bossa nova, a toned-down and romanticized take on Brazilian samba music.

"He could read a newspaper and sound good," Miles Davis once said of Gilberto's tone.

As much a feeling as a set of musical rules, Gilberto's aesthetic has resonated in the work of artists including Sade, Caetano Veloso, Leonard Cohen, Joni Mitchell, Stereolab, Gal Costa, Seu Jorge and pretty much every Brazilian songwriter since 1960. Gilberto's daughter Bebel has been a guiding force in carrying bossa nova into a new electronic century.

"I owe João Gilberto everything I am today," fellow Brazilian Veloso has said. "Even if I were something else and not a musician, I would say that I owe him everything."

If it's true that some cultures are just better at making music, Brazil's reputation was solidified when Gilberto and Jobim, both then based in Rio de Janeiro, joined forces in the late 1950s. Born 1,200 miles north in the province of Bahia, Gilberto was first drawn to the guitar at age 15.

'NO POETRY IN THEIR SOULS'

Preternaturally artistic, he drew the concern of his parents at an early age. One story described the son during a mental evaluation. "Gilberto looked out of the window and noted the 'wind tearing out the trees' hair ... Told by the psychologist that 'trees don't have hair,' Gilberto replied, 'And some people have no poetry in their souls'," according to a 2003 story in The Times.

In 1958, Gilberto recorded "Chega de Saudade," a mesmerizing Jobim-penned crooner. Never much of a songwriter himself, Gilberto, then in his late 20s, regularly tapped Jobim's work. That symbiotic musical relationship defined a movement, and along the way, bossa nova integrated itself into the global conversation in much the same way rock 'n' roll did.

The difference? Where Chuck Berry and Elvis Presley upped the tempo, attitude and energy, Gilberto and Jobim soothed and seduced their way onto dance floors.

When the late Brazilian guitarist Oscar Castro-Neves heard his first Gilberto record, he recalled to The Times that he was astonished, comparing it to the first time he heard trumpeter Charlie Parker.

"It changed everything, for every young musician in Brazil. Once we heard what João was doing with the guitar and the voice, we all had to find a way to figure out how he did it," Castro-Neves told writer Don Heckman.

Rather than building Carmen Miranda-esque samba wildfires of big beat percussion to propel loud, expressive singers, Gilberto lighted a few candles and channeled the breathy tones of Chet Baker, Miles Davis and Frank Sinatra, as well as successful Brazilian singers Lucio Alves and Dick Farney. His success earned him a U.S. deal with Capitol Records in 1960.

Samba and bossa nova had already worked its way into American jazz by then, mostly through the efforts of musicians Getz, Dizzy Gillespie and Charlie Byrd.

By the end of 1962, bossa nova had been cited by Life magazine as "fast becoming a U.S. rage." Gilberto, Jobim and other Brazilian musicians had been invited to the White House by Jackie Kennedy, and Presley had recorded the rollicking "Bossa Nova Baby." In Los Angeles, "exotica" bandleader Martin Denny tapped the rhythm for Quiet Village Bossa Nova. Music mogul and A&M Records founder Herb Alpert harnessed the Getz/Gilberto-inspired trend by signing Sergio Mendes.

But "The Girl From Ipanema" was something different: a beguiling pop song wrapped inside a cool jazz number. Sung by Gilberto's then-wife, Astrud, the song marvels on the titular girl as she strolls along the beach. "When she walks, she's like a samba/That swings so cool and sways so gentle."

The Jobim-penned "Desafinado" became Gilberto's calling card. "Que isto é bossa-nova, isto é muito natural," he sings, defining his music as "natural" while characterizing himself as the outcast. He sings as if whispering the words into a lover's ear.

"The singular essence of João Gilberto is his capacity for understatement in dealing, not with jazz, but with superior popular songs," jazz writer Feather wrote in The Times of a 1967 performance at UCLA. "Showing an utter lack of artifice, he sings as if trying out each tune in the silence of his living room."

Getz was one of those people, and the two collaborated a number of times across the years. They issued a sequel, Getz/Gilberto #2, in 1965, and they teamed again 11 years later for Getz/Gilberto '76, a sublime live recording that was recently reissued by Los Angeles record label Resonance.

Aside from Jobim, though, Gilberto didn't always employ the most complimentary arrangers. At times on his 1991 album, João, the strings capsize the singer's tranquil journeys. His 1977 album Amoroso also featured its share of overwrought arrangements, but Gilberto's sublimely orchestrated eight-minute take on "Besame Mucho" communicates desire with a lubricated lushness. "Triste," from the same 1977 album, is one of his best-ever records.

A perfectionist and contrarian who seldom granted interviews, Gilberto in concert was notable for the meditative beauty of his voice and his fierce devotion to sound quality.

In 2003, he cut short a much-anticipated performance at the Hollywood Bowl due to his dissatisfaction with the microphones. The Times reviewer described the incident as "yet another installment in the long list of eccentric episodes associated with an artist almost as well known for his unpredictability as for the quality of his music."

That unpredictability could frustrate audiences, but the artist had his reasons: "To understand and be understood is a kind of peace," Gilberto wrote in the Getz/Gilberto liner notes, adding that he found "great peace in real communication with another person."

Gilberto's musical communiques were as real as his guitar, and provided peace to millions.