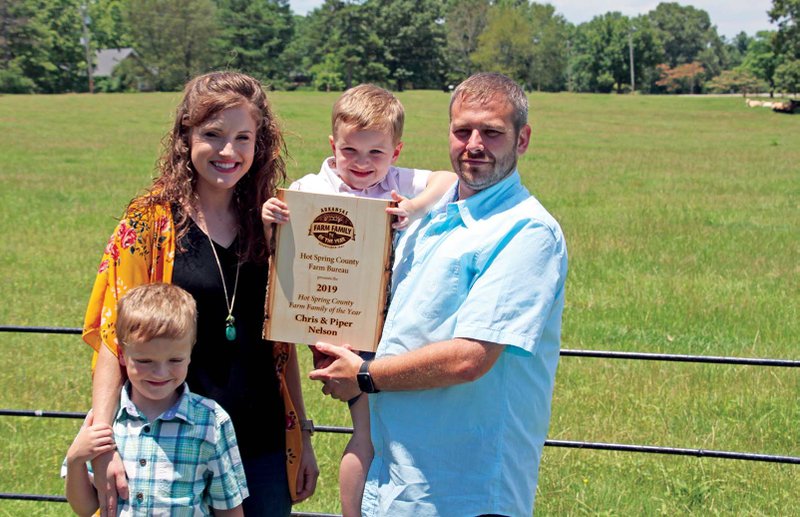 The Nelson family of Malvern is the 2019 Hot Spring County Farm Family of the Year. From left are Grant, 6; Piper; Noah, 4; and Chris. The Nelsons have 89 acres altogether, including 40 at their home in Malvern. ( Sam Pierce)

MALVERN — Chris Nelson and his wife, Piper, were surprised when they were selected as Hot Spring County’s 2019 Farm Family of the Year.

“We were honored, but we didn’t really feel qualified for it,” Piper said.

“We thought it would have gone to somebody with a bigger farm or a longer operation,” she said.

“I was surprised to get this honor,” Chris said. “I am not even sure what it means to us, to be honest.”

The Nelsons have 89 acres altogether, including 40 at their home in Malvern and the rest about 5 miles down the road from where they live on Strawberry Lane in Malvern. Chris said he is looking into developing a stocker-cattle operation on that property.

The couple have an estimated 40 commercial-bred cows, as well as a couple of horses. They have only been farming for about two years.

“I just like cattle and taking care of them and trying to make it profitable,” Chris said.

Chris is the son of Delores Wingo and Tom Nelson. Tom lives in Lincoln City, Oregon. Chris’ grandpa owned a dairy-goat farm, and it exposed Chris to agriculture. Piper is the daughter of Jeff Cheryl Finley.

Chris also owns and operates Providence Veterinary Care in Malvern, and he is very active in many organizations in Hot Spring County, including the local 4-H chapter and the Cattlemen’s Association.

“I grew up in 4-H, and I started getting into cattle after returning from veterinary school,” Chris said. “I have just always been into farm animals growing up. It has always been an interest.”

The couple also have a clinic in Caddo Valley, and Chris said he hired a man in October to help with the labor on the farm, as well as the clinic.

“There is just not enough time in the day to do both,” Nelson said. “We have a haul-in facility for large-animal medicine, and he has been working for me here and at the clinic.”

The Nelsons have a cow-calf operation and typically sell cattle at Hope Sale Barn.

“I own a veterinary hospital and provide both small- and large-animal medicine, so we are very involved in livestock production in Hot Spring County

and surrounding areas,” Chris said. “This allows us to know other farmers in the area on a personal and professional basis.”

Chris has dealt with some back issues after having to have surgery about two years ago. The couple also recently remodeled their house and just moved back into it about a month ago.

“The only real problem we have had to deal with is property drainage and preparing the fields in order to maximize on our production,” he said.

Chris said his main goal is to continue to increase efficiency and maximize production to allow for healthy animals and more profits.

“We are also pursing ways to benefit the local 4-H groups in order for them to grow in their knowledge of livestock production,” Chris said. “This is very important to continue farming in Hot Spring County.”

Chris said he has always had an interest in having some kind of farm and has always been interested in cattle. He said when he eventually retires and sells his clinic, he will invest more time in the farm.

“And I wanted my boys exposed to it,” Chris said.

Chris grew up in Lono, and Piper grew up in Malvern, and the couple met at Mount Zion Missionary Baptist Church in Malvern. They will celebrate 11 years of marriage in August.