Silver Threads: Quilts are more than blankets — they are art and they teach us history 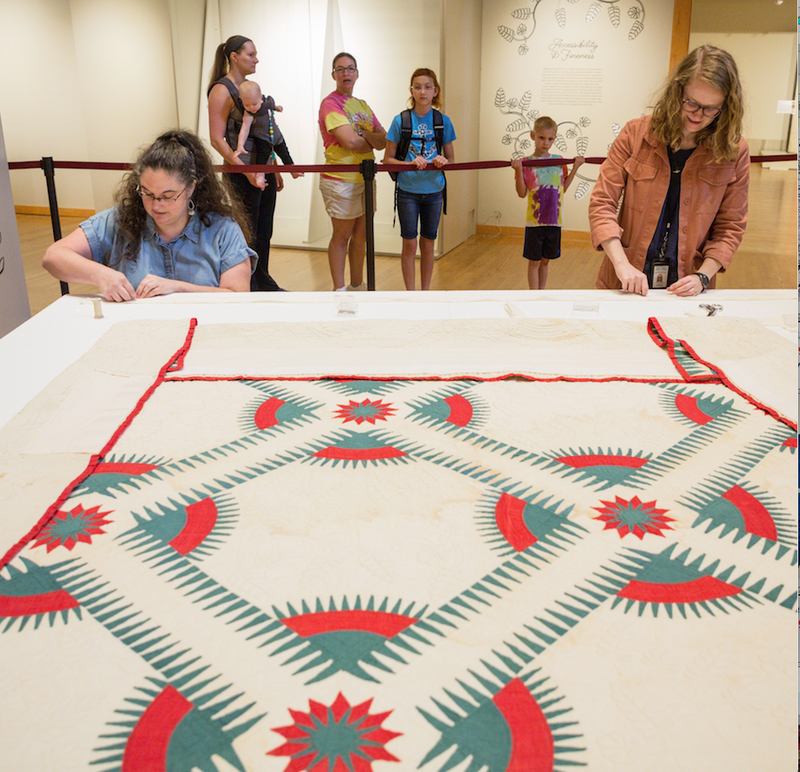 There's something so familiar about a simple quilt. Just its presence on a bed can make a room look inviting and homey.

But quilts are not just bed coverings. And they're far from simple. They are pieces of art. They tell a story. They can even be political statements.

‘Stitched Together: A Treasury of Arkansas Quilts’

In the new exhibit "Stitched Together: A Treasury of Arkansas Quilts," the Historic Arkansas Museum is now examining the full spectrum of quilt lore: looking at their complexity and their many uses and how they can help chronicle the history of life in Arkansas.

While many people believe that early quilts were purely utilitarian -- made to keep people warm at night -- curator Carey Voss says that in the 19th century, manufactured wool blankets were far more commonly found on rural beds.

Voss explains that, while some were used as bed coverings, early quilts were more often made for display or for sentimental reasons. They were made from scraps from wedding dresses and other fine clothing. They were set out for show or used to decorate the "best bed" in the house.

And as Voss points out, "they would not be here if they were used very much."

Some people may also think of quilts as rustic or rudimentary. Some were. But many were not. 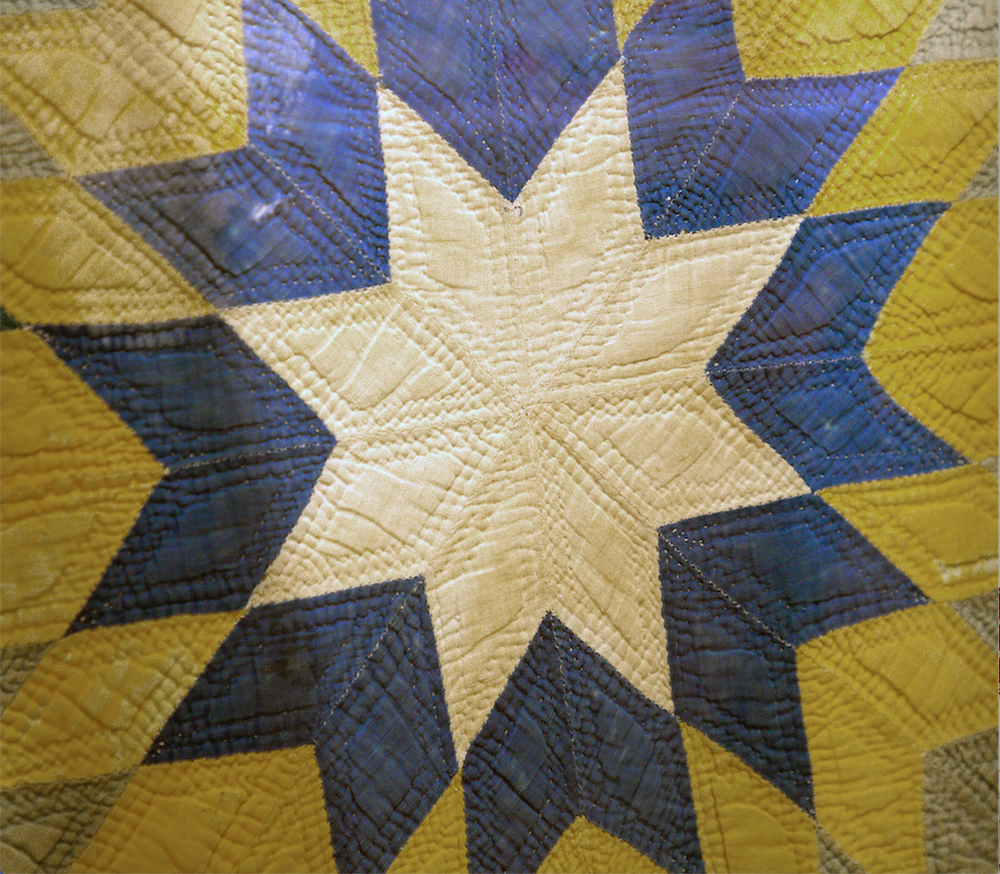 A detail from one of the quilts on display at Historic Arkansas Musem. (Arkansas Democrat-Gazette/JOHN SYKES JR.)

And despite the "backwoods" image of early Arkansas, Voss says, "Arkansas women were producing quilts that were as fine as any being produced in the country at that time. There was no lack of culture."

It took a great deal of skill and planning to create the complex designs and patterns on many of these comfort objects.

"They were typically made by women who had refined sensibilities. These women were not stupid," Voss says.

The purpose and style of quilts evolved over the years and that evolution says a great deal about the times in which people lived.

For instance, scraps have almost always been the preferred material in creating quilt designs.

By the Great Depression, scraps were a matter of necessity and survival.

Quilts also served a higher purpose for the women who made them. Quilting was one of the few artistic, creative outlets available to most women. It was an area where they had complete autonomy. It was also a social and emotional outlet, as well as a meditative hobby to calm, soothe and relax them after a hard day.

Voss says, "That's one of the reasons to have this exhibit is to explore and talk about all the ways we use quilts and all the ways quilts have been used by our ancestors."

For the exhibit itself, they pored over the museum's massive collection: 570 in total, with 195 made in Arkansas.

The rarest of those are the pre-Civil War quilts. Arkansas didn't become a territory until 1819 and was very sparsely populated by people of European descent until well into statehood in 1836. The small population and the price of fabric meant fewer quilts were made in Arkansas before the 1860s.

"That's why we don't have many pre-war," she says.

The fragility, age and size of the quilts in question -- some are as large as 10-by-10 feet -- makes it difficult to display many of them at any given time.

Because they don't have an on-site textile restoration expert, quilts have to be shipped out to special textile conservators to be repaired.

Most of the quilts are rolled up and stored in large panels at the museum's off-site storage facility. A few, though, are stored flat in a new quilt cabinet, making it easier to show them to visiting public.

Narrowing it down to only 10 quilts for this exhibit wasn't easy. The ones they selected were chosen largely for their age, their condition and their fineness. But also chosen depending on how well they fit one of the exhibit's six themes: 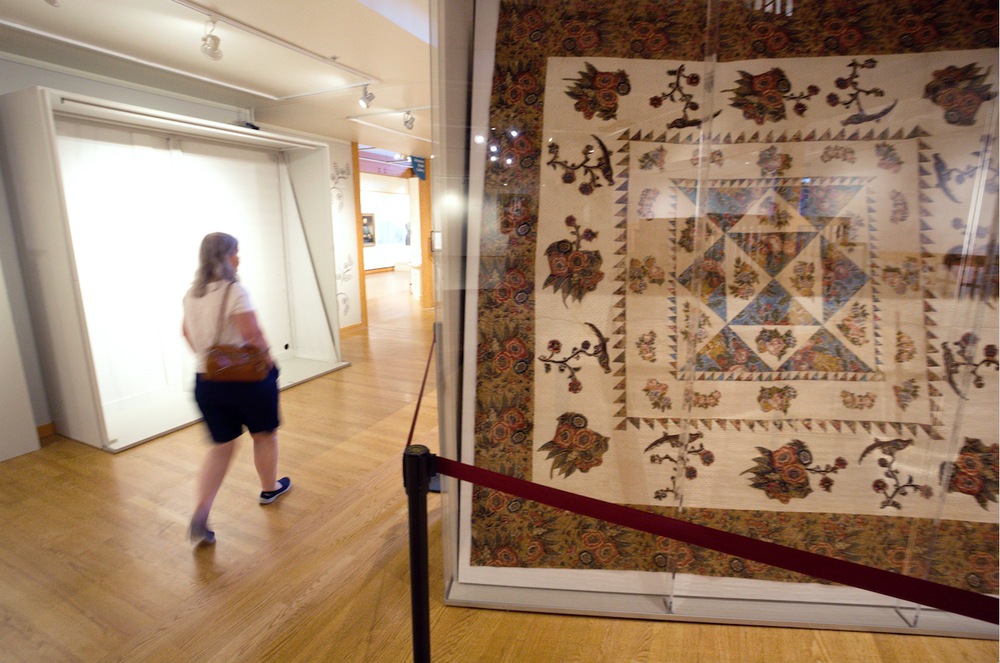 A visitor strolls past Chintz Applique quilt, on display in “Stitched Together: A Treasury of Arkansas Quilts” at the Historic Arkansas Museum. (Arkansas Democrat-Gazette/JOHN SYKES JR.)

• Enslaved Artisans: One of the quilts on display, the Chintz Applique quilt made in 1838, may have been made at least in part by slaves and it's one they're particularly proud to show.

Voss explains that people often try to claim a quilt was made by an enslaved artisan because of the quality of the materials used or the level of difficulty of the quilt.

However, she says, "There is no way to know if a quilt was made by an enslaved artisan except by knowledge of its provenance and census records."

In this case, they know the quilt was made for the 1838 marriage of Rebecca Brilhart and Caleb Linsey Jr. and that the family in question owned several female slaves. So, while there's no way to know for sure, it's reasonable to believe that the quilt was made in whole or in part by slaves.

"We're really proud to display that quilt and hopefully give a nod to those enslaved artisans who were producing work every bit as fine as their white counterparts."

• Accessibility and Fineness: Quilting is what Voss refers to as "a democratic art," a skill that can be developed and performed by anyone. Quilting was a practice that crossed racial, religious and socio-economic boundaries.

"People see fineness and equate it with the level of wealth," Chandler says.

But, she says, there was no real correlation. The fineness and complexity of a quilt had everything to do with the creator's skill level, not necessarily with her wealth.

Voss adds, "We didn't make an effort to tell you about each quilter's socio-economic status. I don't think you can tell."

To demonstrate the variety, there are two quilts: the fairly simple Nine Patch and the Rocky Mountain Road, which is very complex with thousands of small pieces and trapunto (stuffed) work.

• Inspired By: Quilt makers found inspiration everywhere around them, in furniture design, nature, and in current fads. The popularity of Greek symbols is reflected in the Lyre Pattern.

Even more fascinating, though is the Rose Family Crazy -- a "crazy quilt." The crazy quilt fad began with the 1876 Philadelphia Centennial Exposition, where the Japanese Pavilion introduced Americans to very different types of designs.

The crazy quilt features pieces of all different types of fabrics. The one on display in the exhibit was commissioned by Uriah Milton Rose, founder of the Rose Law Firm, around 1880. Up close, the quilt is a dizzying collection of scraps -- mostly from fabric used to make family member's debut gowns and other fine clothing -- all held together with varying stitch patterns with added embellishments such as embroidered daisies or family initials.

• Family: Quilts were often made to commemorate important moments such as a birth, death or marriage. Quilting was also a tradition frequently passed down through the generations, a tangible sign of a family's heritage.

There are quilts in the exhibit and the collection from the Manning family. But the Star of Bethlehem made by Mary Jane Vincent was chosen to demonstrate the family quilting bond. Vincent completed the quilt the night she gave birth to her son in 1860.

• Community: Quilting bees were an important social outlet for many women in early Arkansas, a chance to get together to talk while they worked, to share ideas and patterns.

Quilts were also sometimes made by groups of friends or church members, to sell in a fundraiser or to give to a departing community member as a memento.

The Signature quilt was made by the Women's Home Missionary Society of Cabot to raise money for a new church building. It bears the embroidered names of people who donated money to the cause.

The Mother Baker quilt is one of the more recent (circa 1950) quilts and also one of the more rudimentary. Made by North Little Rock resident Clara Baker, it's made up of accessible scraps such as hospital sheets and even a patch of sweater knit material. Baker made many quilts and gave them away to friends and visitors.

• Politics: Quilts were sometimes a way for women to express their own political views.

In the case of the Secession quilt, Mary Green McPherson created a bold stars and stripes design to symbolize Arkansas' secession from the Union. McPherson was placed under house arrest by Union troops and the quilt itself stayed "underground," passed from one home to another until the Civil War ended.

"It was seen to be dangerous," Voss says. "That a quilt could be dangerous is an interesting idea."

Many of the quilts are fragile and even fraying in places, so installation and display methods have been painstaking. Each quilt is sewn to a muslin cloth, which in turn has Velcro that attaches to Velcro on a flannel surface wall mount.

Chandler says even those not interested in history can find something to connect to here.

"Come see them as works of art."

Anyone inspired can try their own hand at quilt design at the interactive station. The Arkansas Quilters Guild has produced pieces for the display where visitors can create Four Patch, Nine Patch and Mosaic Hexagon patterns on flannel design boards. 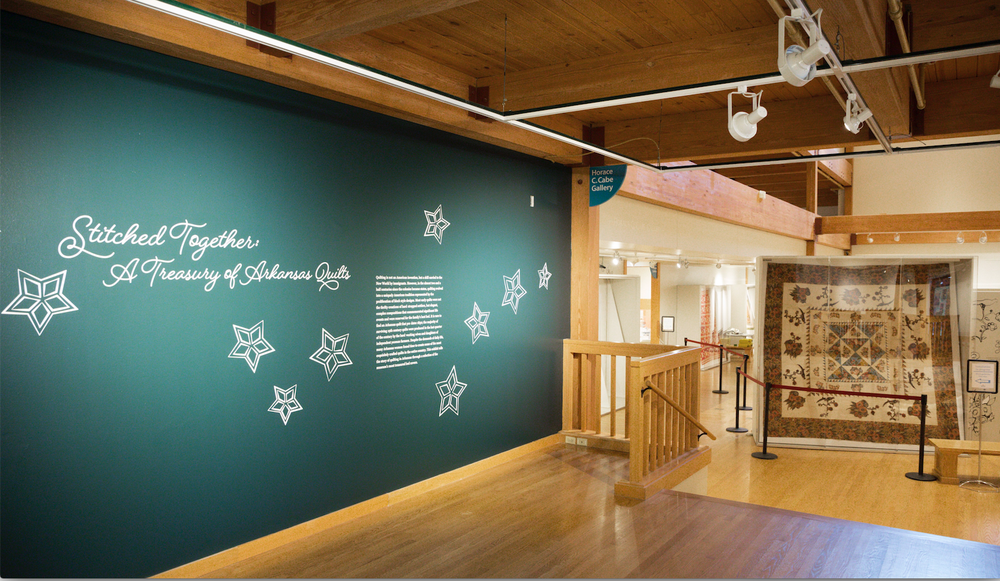 It's an exhibit that fits in perfectly with the museum's mission.

Voss says, "A lot of people think we're a history museum. We do present historical subjects, but through the lens of objects. The whole idea behind material culture studies is clues in those objects tell us about those people."

In this case, those objects are quilts. And there are a lot of clues to be found.

The designs and purposes of quilts have evolved over the years with the changing times, but quilts and quilting still go on. And the familiarity of the older quilts makes it that much easier to connect to the past.

As Voss says, "I think quilts allow us to connect to people who lived a really long time ago. It's a living craft. I feel like this is like a time machine."