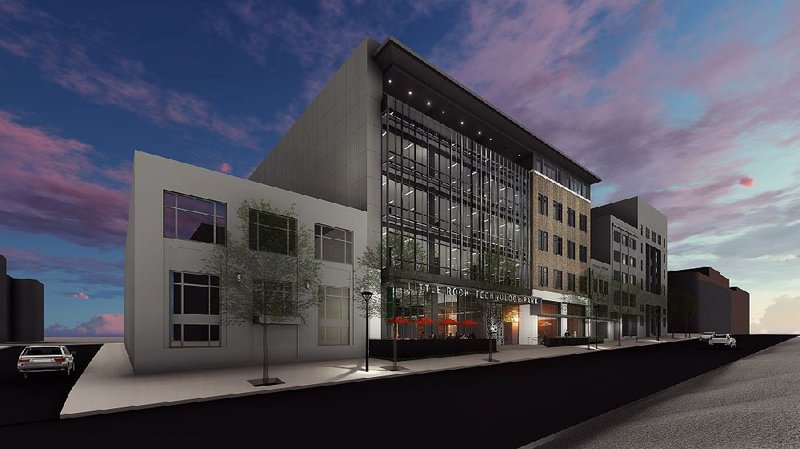 An artist rendering shows the proposed second phase of the Little Rock Technology Park on Main Street. The five-story building in the center of the rendering would go up on a parking lot.

Addressing a room filled with bank executives last week who helped bankroll the tech park's first phase, Brent Birch, the park's executive director, made his first pitch for why the park and the city need the second phase -- a five-story, 85,000-square-foot building on what is now a parking lot on the north side of the existing tech park.

"We sold this [tech park] to taxpayers as a bigger deal than just Phase One," he said at the tech park's monthly meeting. "That's big, but it's also big for Little Rock to keep moving forward.

"You look at our regional competitors. They're a little bit ahead of us. We caught up pretty quick with Phase One. But if we stall here, Little Rock is going to pay the price for that. With technology becoming a bigger and bigger component of our everyday life, that's not something we can afford."

Birch's presentation wasn't just a pitch for the second phase, he also reviewed the success of the first phase of the park, conceived more than a decade ago as a Silicon Valley-like incubator for high-tech startup companies.

It has worked, Birch said.

"The environment we've created has been the game changer," he said. "They are looking for more than money to get going. In this building, it's the environment. You get a lot of like-minded people talking the same talk, walking the same walk. And you've seen those successes come to fruition."

"You've seen it also transition to where we've gotten with the stability of our tenant base," he said. "We've got a diverse group of startups, early-stage companies and some that have been around a while.

"It's been a good mix that has created the environment that has been so crucial."

Several companies that got their start in the tech park have seen success.

Apptegy, which builds communications/marketing platforms, started in the park's initial temporary space on East Markham Street with one employee, founder Jeston George. It recently hired its 100th employee and works out of the Simmons Tower at Capitol Avenue and Broadway.

Bond.AI, a platform to help people improve their money management, won a best-of-show at a financial innovation conference last year.

MOBX, which specializes in mobile applications, includes ESPN Fantasy Sports among its clients.

Gas POS, which has developed point-of-sale systems for gas stations and truck stops, moved to Argenta in North Little Rock after it outgrew its space in the tech park after a move from Birmingham, Ala.

Other startups, such as Few, which customizes Web and mobile applications for other companies, could outgrow the tech park but prefer to stay, Birch said.

"Few has six or eight people that work out of this space," he said. "They probably have another 20 spread out all over the globe that they can pull in when they need them. Those people probably don't work exclusively for Few. But if they need them on a project, they can pull that talent in."

Another tenant, the Venture Center, is more akin to a partner and is a "big source of the private investment that is funneled through this building, through the accelerators as well," Birch said.

"They fill a key role for us in the success of this project," he added. "They create the ability to mentor, train, accelerate these early-stage companies.

"The purpose of this project was never to just be office space -- you come in, plug in your computer and bang at your keyboard all day. All of these educational opportunities, networking opportunities -- the Venture Center fills that role for us."

All of which brought Birch to the practicalities of the second phase. In short, the tech park needs additional space to meet demand, he said.

"We're running into instances where we are turning people away -- not only people who can fit into the space we have, but people who want more than we can offer," Birch said. "We don't want to be a position where we are turning people away. Plus, I have the feeling that there are long-established companies in the Little Rock area that would like to be around this environment for recruitment. We want to be able to catch some of those companies."

The second phase also will offer additional conference space, which is lacking in the existing tech park.

"We lose out on a lot of opportunities to have people in the building and do more educational things in our space," Birch said. "We have to send it elsewhere. The Venture Center has to hold Demo Day ... somewhere else. That's the cards we were dealt with with hundred-year old buildings. You work with what you've got and that's what we did."

The tech park is on sound financial footing, Birch said.

The city promised the park $22 million of the proceeds from a 2011 sales tax, which will expire in 2021, to help pay for capital costs. The tax hasn't collected as much as estimated, and the amount the park will receive is now estimated at $20.7 million.

The tech park paid off a $5.4 million loan earlier this year. The board voted last week to make a $300,000 payment on an outstanding $9.6 million loan.

The park has almost $700,000 left to pay of a $5.4 million loan after the board approved putting a $1.5 million sales-tax payment from the city toward the note. Birch said the balance likely will be paid with the next city payment later this year. Birch said he didn't know what the amount would be.

That leaves $9.6 million in outstanding debt, he said.

Birch said financing the second phase is a work in progress.

"We have some plans to get out there and determine what is going to be the best route to finance this project sooner than later," he said.

'The ask from us to you is to continue to support the project the way you have," Birch told the bankers. "You believed in us enough to get this off the ground. It's been crucial to our success. Our hope is that the relationship continues to be strong as it is and then you're ready for what we need for the space, too. We don't know what it is today."

Jeff Hildebrand, executive vice president and chief lending officer for Centennial Bank, which led the bank consortium, said he liked what he heard but wanted to know more before committing.

"We're certainly thrilled with what you've done so far and we want to continue to participate," Hildebrand said. "We don't know how many banks will be involved but we're certainly interested to see what you come up with and look at it at that time."

John Burgess, president and co-founder of Mainstream Technologies Inc. and chairman of the Little Rock Technology Authority Board, said last week's presentation was just the beginning of a process that could take up to three years.

"This was a first test run to take out to stakeholders and potential investors," he said. "We're ready to start the fundraising phase for Phase Two." 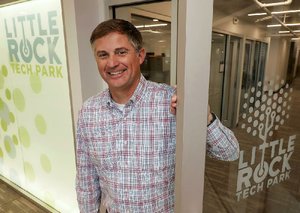