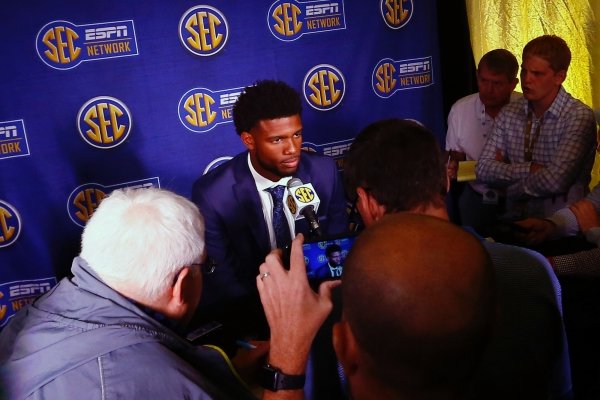 HOOVER, Ala. -- Quarterback Kelly Bryant and wide receiver Jonathan Nance are roommates at Missouri and graduate transfers who have one more season to finish their college careers on a strong note.

Bryant transferred in from Clemson and Nance from the University of Arkansas.

"Jonathan had a really good spring," said Bryant, who also visited Arkansas during his re-recruitment last fall. "I didn't know much about him. I didn't realize how fast he is. It took me a day or two to get adjusted to how he plays.

"If you get him the ball, he's going to do the rest. He's a quick-twitch guy. He can get in and out of routes really fast. He's a mismatch."

"I've got a number of guys battling for those jobs, but he did a nice job understanding the scheme of what we're trying to do offensively," Missouri Coach Barry Odom said. "And by the end of spring, he was able to play to his speed because he understood the concepts and what we're asking out of the play."

"They do need a lot of help in the bullpen," Mullen noted. "He's got a lot of heat. I've seen, though, that he's still working on his accuracy. I don't know if I'd want to get in the batter's box if he's throwing 95 [miles per hour]."

Apprised of Mullen's comment, Franks replied, "No, he wouldn't want to be in there because he doesn't want to get struck out."

A reporter opened a question to LSU Coach Ed Orgeron by stating, "You keep threatening to go to this upbeat, Spread offense ... and I'm taking you at your word this time," which drew laughter among the assembled media.

"Akial Byers will be a starter for us in some capacity on the defensive line," Tigers Coach Barry Odom said. "He's had a tremendous offseason. He is up to 290, 295 [pounds], runs really well, explosive player that's made big plays for us."

Byers returned a fumble for a touchdown against Arkansas and finished the season with 20 tackles.

"He has great versatility," Odom said. 'He can play either of the end spots or inside. I am excited about the way he's grown."

Powell, expected to be Kelly Bryant's backup, completed 6 of 14 passes for 134 yards last season when he played behind Drew Lock, a second-round NFL Draft pick by Denver.

"Taylor Powell is in the quarterback room and has developed, really had his best spring that we've seen thus far," Odom said. "He's continued to move his game forward and he's going to end up helping us."

"Barrett Banister came to us as a walk-on wide receiver and has earned a scholarship, made some huge third-down catches for us last year in critical times," Odom said. "Every day you get the best Barrett Banister that he can be, and he's done a tremendous job."

LSU Coach Ed Orgeron was asked about the perception by SEC fans that Central Florida was getting too big for its britches before the Tigers beat the Knights 40-32 in the Fiesta Bowl to end UCF's 25-game winning streak.

Alabama -- which lost at Auburn 26-14 -- won the College Football Playoffs title with a 13-1 record after victories over Clemson and Georgia.

"It meant a lot for us to win 10 games, to win on New Year's Day Six bowl," Orgeron said of beating the Knights. "We had a lot of respect for Central Florida.

"They were feisty. They had an attitude about themselves. No wonder they won 25 [consecutive] games. They had some very good football players. They were well coached.

"I knew they were going to fight till the end. [It] took an onside kick for us to recover to win the football game.

"I don't know if they got too big for their britches or not. That's not for me to say. I thought that was a tough, hard-fought ballgame."

SEC Commissioner Greg Sankey told the assembled media that SEC media days would move to Las Vegas near the top of his opening remarks on Monday.

Sankey then quickly clarified that was a joke, noting how many heads snapped around, and announced that media days would return to Atlanta in 2020 to be hosted by the College Football Hall of Fame. The event will take place in Nashville, Tenn., in 2021.

Last year's media days in Atlanta broke a 34-year streak of the annual event being held in the Birmingham area.

Get ready for an ESPN blitz this fall that will celebrate the 150th anniversary of the advent of college football.

ESPN senior writer Ivan Maisel and Kevin Weiberg, the former Big 12 commissioner who is serving as executive director of College Football 150th Anniversary, promoted the content ESPN will supply this fall, including an intriguing trailer that featured many of the great moments, players and coaches in the history of the sport.

Florida and the University of Miami will play Aug. 24 in Orlando, Fla., as part of the 150th anniversary celebration, and a documentary titled Football is US: The College Game will air that day to kick off ESPN's series of documentaries devoted to the uniquely American game.

Maisel said there will be more than 30 hours of original content aired on ESPN during the season-long celebration of college football, which began with the famous Rutgers vs. Princeton game on Nov. 6, 1869.

Arkansas senior McTelvin Agim was one of 14 SEC players named to the 80-member Bednarik Award watch list as announced by the Maxwell Football Club on Monday.

Agim, a defensive tackle who played inside and outside last season, will join Coach Chad Morris and teammates De'Jon Harris and Devwah Whaley at SEC media days on Wednesday.

LSU Coach Ed Orgeron said two true freshmen -- cornerback Derek Stingley and defensive lineman Siaki Ika -- already are in the starting lineup. He said freshman guard Kardell Thomas also will compete for a starting job and that running backs Tyrion Davis and John Embery will be among newcomers from the 2019 signing class to play key roles.

"We're excited to see these guys," Orgeron said. "First time we could coach most of these guys in camp, and we'll give them a chance to compete and play."

Florida will play Miami for the first time in six years when the Gators open the season against the Hurricanes on Aug. 24 in Orlando, Fla.

"I think it's huge," Gators Coach Dan Mullen said. "I mean, there's a lot that goes into that game. We're the opening game of the 150th year of college football. ... And on top of it, being a big rivalry game within the state of Florida."

"Whoever wins that game ends up really kicking off the season on the right note with a big win in a big game with a lot of national exposure."

Missouri linebacker Cale Garrett said he considered joining the U.S. Naval Academy with the intent of training to become a Navy Seal before eventually opting to play football for the Tigers.

"It's for situations like this, for playing in the SEC," Garrett said, referencing his appearance at SEC media days.