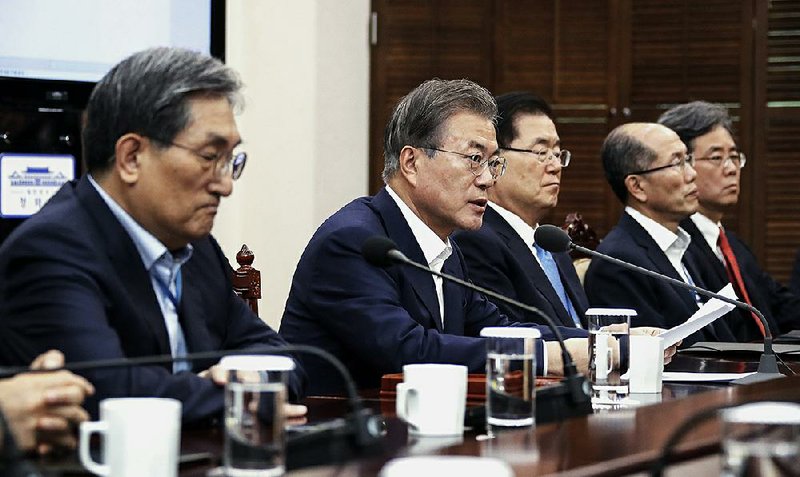 In June, before an audience of world leaders, Prime Minister Shinzo Abe of Japan forcefully defended the global trade order that President Donald Trump has fractured.

"A free and open economy," he told leaders of the Group of 20 nations in Osaka, Japan, "is the foundation of global peace and prosperity."

Two days later, Abe became the latest world leader to strike a blow against free trade when he moved to limit South Korea's access to Japanese chemicals that are essential to its vast electronics industry, citing vague and unspecified concerns about national security. In doing so, Japan joined the United States, Russia and other countries that have used national security concerns as a justification for cutting off trade.

Once rarely invoked by world leaders, such arguments are wearing away at long-established global rules intended to keep trade disputes from spiraling out of control. Once weakened, experts say, damaging trade wars could become more common.

"If this is used too often, there's a real potential to absolutely destroy the entire international trading system," said Bryan Mercurio, an expert on international trade law at the Chinese University of Hong Kong.

"If not one or two or three, but 10 or 15 countries decide they're going to take measures, really unilateral measures, based on some ill-defined national security exception, it devalues the rules."

Japanese officials have said that some South Korean companies have inadequately managed the chemicals, which fall under the category of "controlled items" -- goods with potential military applications. The officials have not named companies or said how supplies may have been mismanaged.

South Korean officials suspect a different motive: retaliation over an escalating political dispute between the two countries concerning reparations for Japan's World War II-era conduct. To some, Abe's move seemed to take a page from Trump's playbook, turning trade into a cudgel.

"The really troubling thing about it is that it represents the increasing weaponization of these trade or economic interests to coerce another country over completely unrelated issues," said Gene Park, an expert on international political economy and Japanese politics at Loyola Marymount University.

"Japan has a lot of legitimate grievances," he said, but trade measures are "not the right way to address them."

South Korea on Friday called on the United Nations to investigate Japan's claims.

"If the investigation concludes that our government has done nothing wrong, Japan should immediately withdraw its retaliatory export restrictions," Kim You-geun, a senior South Korean national security official, said at a news briefing. "Of course, there should be a thorough investigation into whether Japan is violating the rules as well."

Japan's move marks the latest challenge to the global trade rules that have underpinned decades of commerce and economic growth.

Countries began setting the rules in the aftermath of World War II, hoping to avoid a repeat of the trade wars that had worsened the Great Depression. But they carved out exceptions, including for restrictions imposed in the name of national security.

For years, governments have been reluctant to use that exception because the idea of "national security" is open to broad interpretation that makes it ripe for abuse.

"If we just all point to national security, there's a potential for all of the rules to fall apart," said Tania Voon, an expert on international trade law at the University of Melbourne in Australia, adding that "it's pretty easy to see how almost anything might be related" to national security.

"The Japanese have really muddied the water by characterizing the export restrictions as a security move," said Daniel Sneider, who studies the Japan-South Korea relationship at Stanford University. "Now, what do you do if the South Koreans are unwilling to back off?"

Japanese officials said July 1 that they would restrict exports of specialized chemicals -- fluorinated polyimide, resists and hydrogen fluoride -- needed in the production of semiconductors as well as smartphone and television screens. South Korea depends on Japan for much of its supply.

The long-simmering issue took new life after South Korea's Supreme Court ordered a Japanese company to pay compensation to a man who had been forced to work in one of its steel mills during World War II. When the company refused, the court ordered the seizure of some of its South Korean assets.

Japan says that case and others were covered by a 1965 pact that declared claims from that era "settled completely and finally."

"Everyone on both sides of the confrontation clearly knows that this is about the settlement," said Bong Young-shik, an expert on Korean politics at Yonsei University.

Tensions had already been worsening. In November, South Korea said it would dissolve an agreement with Japan intended to settle the issue of women forced to work in Japanese wartime brothels. Relations soured further in December after Tokyo accused a South Korean warship of locking its radar on a Japanese patrol plane. Still, economic relations had remained stable.