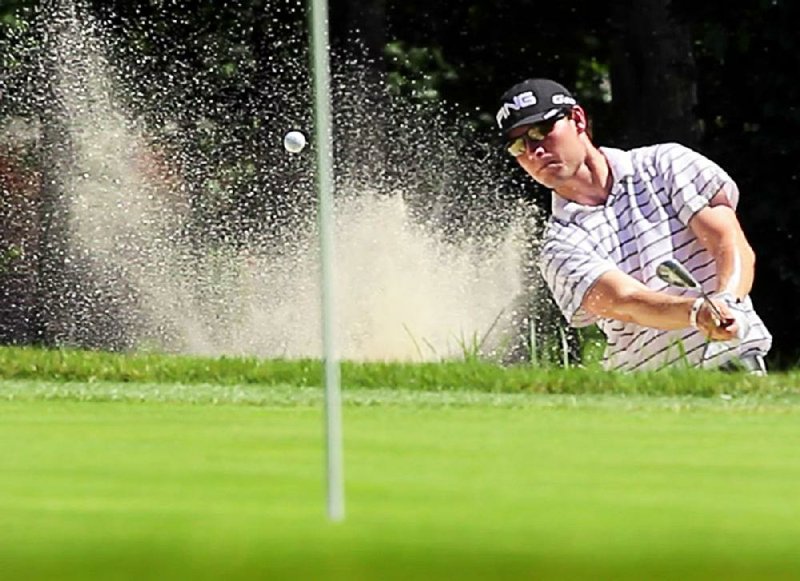 Alex Carpenter knows what it's like to enjoy the spoils of winning a Southern Amateur championship, one of the nation's most prestigious amateur national tournaments.

Luke Long knows what it's like to win on the state's biggest stage. The 2018 Arkansas State Golf Association amateur champion has been at the doorstep of winning the Southern Amateur the past two years but hasn't been able to knock down the door on a championship.

Long will get his third opportunity beginning today when 159 players tee off in the 113th Southern Amateur Championship at the Chenal Country Club Founders Course in Little Rock.

Carpenter, a four-time high school state champion and 2009 Arkansas Baptist graduate, won the 2010 Southern Amateur at Shoal Creek (Ala.) Golf Club, shooting a final round 7-under 65 against a field which included PGA Tour members Patrick Cantlay, Russell Henley and Emiliano Grillo. It was Cantlay that Carpenter had to overcome the final day.

"It was the biggest individual tournament I ever won," said Carpenter, 29, now a Dallas resident. "I had played on Palmer Cup teams that won which was really fun, but individually, winning the Southern Am was the pinnacle."

Down two strokes to Cantlay going into the final round, Carpenter shot a 1-under 35 on the front nine, then blistered the back side with birdies on Nos. 10, 11, 14 and 16 before making eagle at the par-5, 17th to finish with a 7-under 65 for his round . Carpenter was a combined 4 under on the 17th the first three days, including an eagle in the third round. He said he had confidence playing the hole in the final round, but it took making a 65-foot putt to finish off the eagle before making par on the 18th.

"I realized it wasn't over on 17 and had to make two good swings on 18 for par," Carpenter said. "I was playing in the third to last group and knew Cantlay needed to make eagle to force a playoff."

Cantlay nearly did just that, hitting the flag stick from the middle of the fairway with his second shot at the par 4. Carpenter was able to celebrate once he saw Cantlay's ball bounce feet away from the cup instead of in it.

Carpenter missed the cut the next year and nearly did so again at the 2012 event, which was the first time the Southern Amateur was played at Chenal Country Club. In the second round, Carpenter had one hole to play to make the cut before a storm rolled in and forced him to return the next day.

"I was in bed that night thinking that I have played that final hole a thousand times and might have made 20 bogeys," Carpenter said. "I came back the next morning, made my par and got to play the next two days. It was cool having my family and friends around."

Peter Williamson defeated Bobby Wyatt in a playoff on the third extra hole to win that championship. Carpenter finished tied for 60th.

A former standout on the ASGA junior scene before winning last year's state championship, Long, 21, tied for 22nd last year but shot a final-round 79 after going into the round tied for eighth and five strokes behind the leader. He tied for 67th in 2017 but was in contention before shooting 78 in the tournament's final round.

"Again, I was in the hunt last year, tried to make something happen the last day," said Long, who will play the Southern Am and for the University of Houston along with former Fayetteville teammate Matt Cole, who is coming from Arkansas State University as a graduate transfer. "I just compounded mistakes the final day and got buried down the board. The guy who was leading it didn't make any mistakes and no one could catch him.

"The experience was good. I just didn't end up how I wanted. I should have stuck with my game plan because it seemed to work the entire week up until that point. Just tried to make things happen and didn't pull off the shots."

A transfer from Tennessee-Chattanooga, Long sat out last year with the Cougars but played in the team's qualifying events and continued to work on his game in advance of his summer schedule.

"I was able to focus on academics and improve my game," said Long, who received an exemption into the Southern Amateur and is playing Chenal for the first time this week. "From what I understand, the scores should be pretty low. So I am going to keep my foot on the gas the whole time, try to dial in my wedges and make sure I am hitting it good off the tee, then put a good stroke on it on the greens."

Southern Am past champions, locations