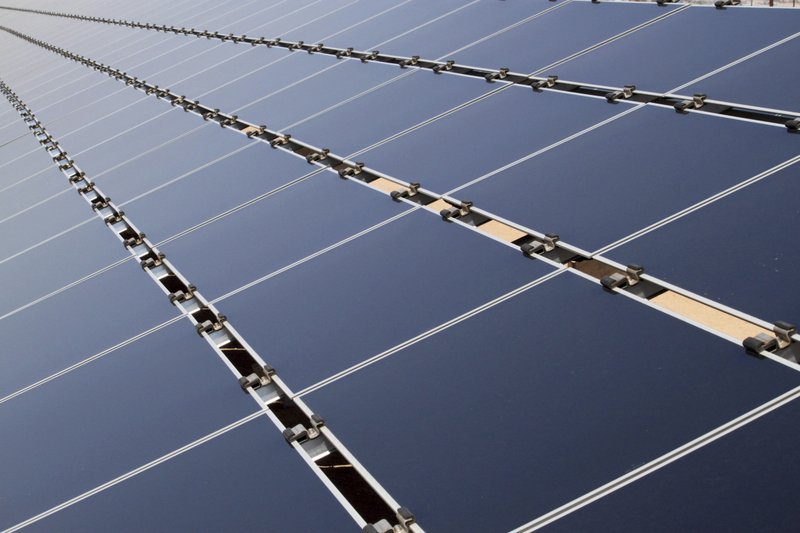 FILE — This April 20, 2011, photo shows some of the 30,000 solar panels that make up the Public Service Company of New Mexico's 2-megawatt photovoltaic array in Albuquerque, N.M.

Scenic Hill Solar is working with Stuttgart to power the city's municipal buildings with a solar array.

Construction on the 3.15 megawatt solar plant is expected to begin soon and should be complete in the first quarter of 2020, said Bill Halter, chief executive officer of Scenic Hill Solar in Little Rock. Halter is a former Arkansas lieutenant governor.

"Once ... approved, this project can be built quite quickly," he said Tuesday.

The project is expected to save Stuttgart about $100,000 annually, Mayor David Earney said Tuesday.

"We're very excited about it," he said.

Halter said Scenic Hill Solar will build and operate the plant on 20 acres and then sell the power it produces to the city. It is expected to provide enough electricity to power Stuttgart's governmental operations.

The plant will use a ground-mounted single axis tracking system and contain more than 7,000 solar modules, according to a release.

New laws in Arkansas allow for leasing and third-party purchasing of solar systems for nontaxed entities like city and county governments and nonprofits, making the projects more financially feasible. The new regulations also increase the size limits for solar arrays, making them more scalable, and add language that grandfathers in rates for early solar adopters.

According to data released in March from the Solar Energy Industries Association, a solar-power advocacy group, 0.34% of Arkansas' electricity comes from solar. The state's solar installations for 2018 jumped to just shy of 120, up by just a handful from the year earlier. The association pegs the value of 2018 investment in solar in Arkansas at $140.2 million.

Halter said projects like the Stuttgart plant allow businesses and governmental entities to save money, protect against future utility cost jumps, and protect the environment.

Among other projects, Scenic Hill Solar is building a 43-acre, 20,000-panel array in Clarksville.