Three of the four House members on Monday criticized President Donald Trump after his attacks on four minority-group Democratic congresswomen. On Tuesday, the four opposed the formal condemnation.

In an interview, U.S. Rep. Rick Crawford of Jonesboro said the Democratic fixation on Trump is unhealthy.

"There are a significant number of members who hate President Trump," he said. "It's a huge impediment to us getting anything done."

He dismissed allegations that Trump's words had been racist.

"I think he touched a nerve. I'm not saying that what he said was even 100% accurate, but I don't think there were any racial overtones there and people should probably be a little less sensitive to things," Crawford said.

Lawmakers wasted hours Tuesday on a nonbinding resolution instead of working to fix the nation's problems, he said.

"It's ridiculous. It's pointless," he added.

In a written statement, U.S. Rep. French Hill of Little Rock called on all sides to behave better.

"The Resolution introduced today by Speaker [Nancy] Pelosi clearly violated the House rules, but more importantly, it only served as a partisan attempt to stoke more political division," he said. "I stand by my previous statement: I'm tired of the war of outrageous and ill-informed comments -- from our president and other elected officials. This country needs less social media back-and-forth and more civil debate on policies that contribute to a stronger, more united nation."

U.S. Rep. Steve Womack of Rogers said the opposition party has a double standard when it comes to speech.

"While I don't condone recent remarks by the president, I will not support a Democrat effort to single out President Trump when members of the majority party are on the record with hateful, disparaging, and anti-Semitic remarks of their own without consequence. It's hypocrisy at its worst," he said.

While distancing himself from Trump's comments, Womack portrayed Trump as a patriot.

"I believe our president loves this country, its people of all backgrounds, and is passionate about American exceptionalism," he said.

On Tuesday, he issued another statement: "Just a few hours ago, the House Parliamentarian ruled to strike Speaker Pelosi's words from the congressional record because she couldn't even talk about President Trump without violating House rules on personal criticism and ridicule. However, House Democrats overruled the Parliamentarian and allowed Speaker Pelosi's words to stand. All this happened while the House was debating a resolution to condemn President Trump for his words. You really can't make this up. Congress needs to get back to the business of legislating. That's what we're here for, and these partisan show votes just take us away from our work for the people."

"While we can vary on what policies we support, singling out people whose opinions differ from our own is bad for discourse and public civility," he said in a written statement.

U.S. Sen. Tom Cotton, who declined to address the controversy Monday, faced questions Tuesday at an Axios News Shapers forum about Trump's attacks on the congresswomen.

The lawmaker from Dardanelle said Trump had been "simply highlighting some of the extreme rhetoric from House Democrats."

Journalist Mike Allen followed up, asking: "Do you consider the comments racist?"

Cotton didn't offer an opinion on that topic.

"Mike, the president's going to tweet what he tweets," he said. "The point he's made, though, is that the House Democrats have engaged in truly outrageous statements that are anti-American, anti-Semitic, anti-police. That's obvious." 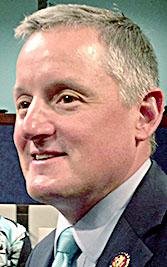