Straggling rain in Arkansas floods buildings, blocks roads; I-30 backed up 10 miles at one point 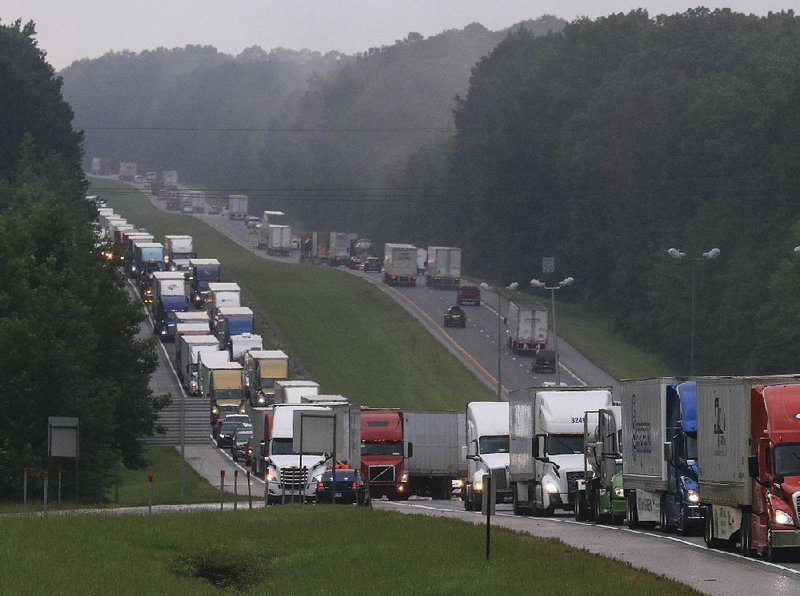 Traffic backs up Tuesday on Interstate 30 in Arkadelphia after high water forced the closing of parts of I-30 west of the city.

ARKADELPHIA -- The remnants of Tropical Depression Barry dumped more than 11 inches of rain over a 24-hour period in some areas of southeastern and south-central Arkansas, leading to flash-flood warnings and numerous road closures Tuesday morning, officials said.

About 15 counties were affected by significant rainfall and flooding, according to Erik Green, a meteorologist with the National Weather Service in North Little Rock. The highest rainfall totals occurred in a narrow area stretching from northern Howard County into southwestern Clark County.

"The remnants of Tropical Storm Barry are just kind of sitting over us right now," Green said Tuesday morning.

Three counties -- Howard, Clark and Pike -- requested assistance from the state because of flooding, according to Barbara Hager, a spokesman for the Arkansas Department of Emergency Management.

Arkansas is the latest state affected by the storm system that made landfall Saturday on Louisiana's coast as a Category 1 hurricane. The system was downgraded to a tropical depression by Sunday afternoon, but its rain bands led to flooding and tornado threats as it moved from central Louisiana into Mississippi and eventually Arkansas.

About 6.53 inches of rain fell Tuesday morning in Arkadelphia, and City Manager Gary Brinkley described the flash flooding that tore through the Clark County city of 10,650 as an "apocalypse."

"It's not been one of our better days," Brinkley said by telephone from the city's water treatment plant, where workers were trying to isolate a leak in the system that led to a citywide boil order.

More than 17 inches of rain fell in a 24-hour span in the Dierks Lake area in Howard County, according to the U.S. Army Corps of Engineers in Little Rock. Rain filled the flood pool at the lake, which required the Corps to begin water releases between 10 p.m. and midnight Tuesday, according to a news release from the Corps. Spokesman Laurie Driver said the reservoir received more than 9 inches of rain over a nine-hour period, and the flood pool was rising about 2 feet an hour.

Weather service meteorologist Jeff Hood in North Little Rock said he couldn't confirm that 17 inches had fallen in the Dierks Lake area, but he said the amount didn't seem unreasonable. Hood said the weather service doesn't have equipment to measure rainfall totals in that specific area.

"The 17 inches of rain could be possible," he said. "Our radar has shown a few spots that had high totals."

The weather service said 13.5 inches of rain was measured in Murfreesboro and 12.73 inches fell at Langley, both in Pike County.

Traffic backed up Tuesday morning along portions of Interstate 30 as high-water closures along the interstate and other highways created delays, diverted traffic and trapped drivers between closed-off areas.

Arkansas Department of Transportation spokesman Danny Straessle said a 10-mile backup occurred in the westbound lanes of I-30 near Prescott. The backup occurred when drivers were hemmed in between major closures north of Prescott in Nevada County and near Gurdon in Clark County.

Transportation Department crews moved through the area between the closures checking on motorists and distributing water, snacks and other items, Straessle said.

Altogether, more than a dozen portions of Arkansas highways were closed by noon because of high water, according to the department. Interstate 30 was reopened by Tuesday afternoon, Straessle said. 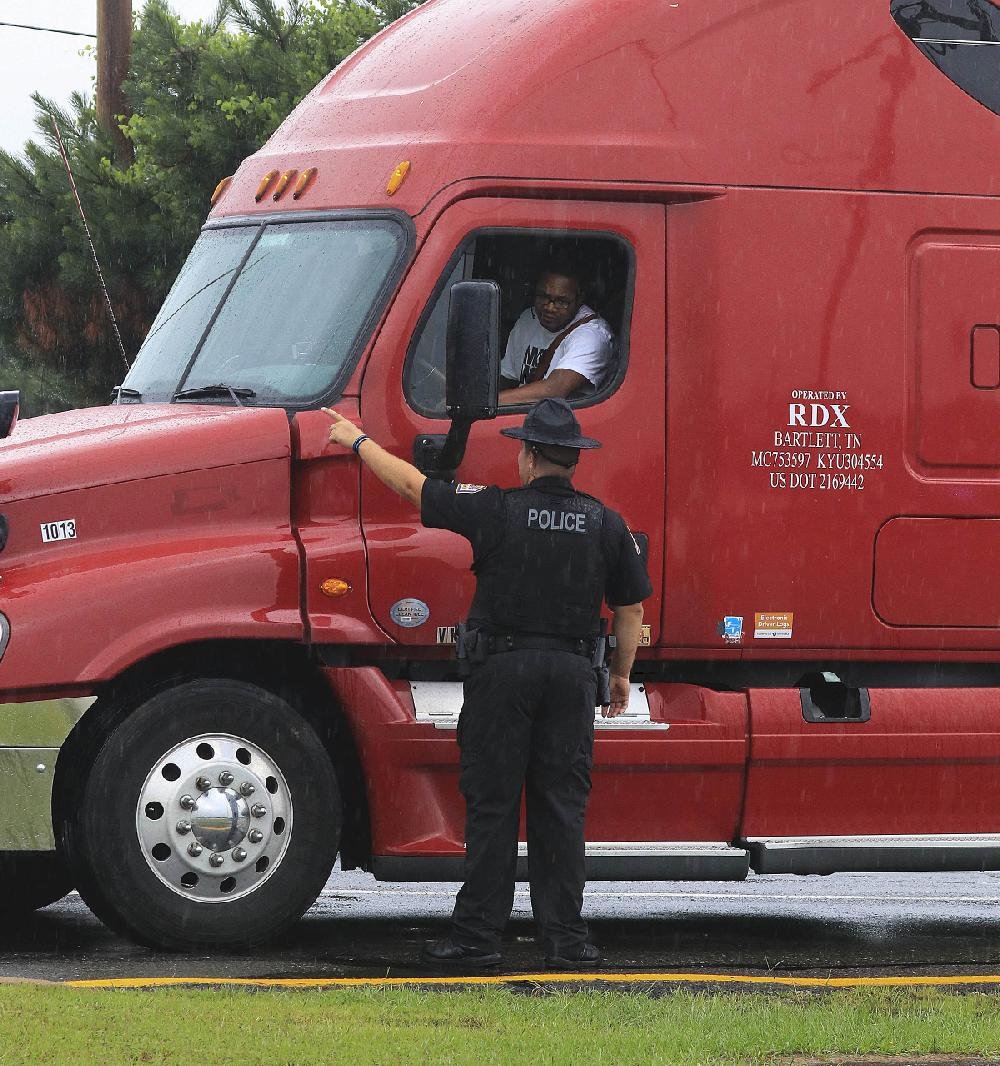 Arkadelphia police officer Chris Sparks gives directions to a truck driver Tuesday on the exit ramp of Interstate 30 after parts of I-30 were closed because of high water.

"The roads flooded over near Okolona, so they routed the traffic through town," Brinkley said. "Then our traffic light synchronization got unbalanced during the storm and they all started blinking red.

"It's just been a wonderful day. The good thing is that maybe we'll get it all out at one time and somebody else can have their turn in the barrel."

"You know how when there's a body in a field, they just line everybody up and start walking, checking every nook and cranny? That's kind of the way this works," Brinkley said, describing the process used to search for the leak at the water treatment plant. "It's a little more sophisticated, but that's kind of a good analogy. 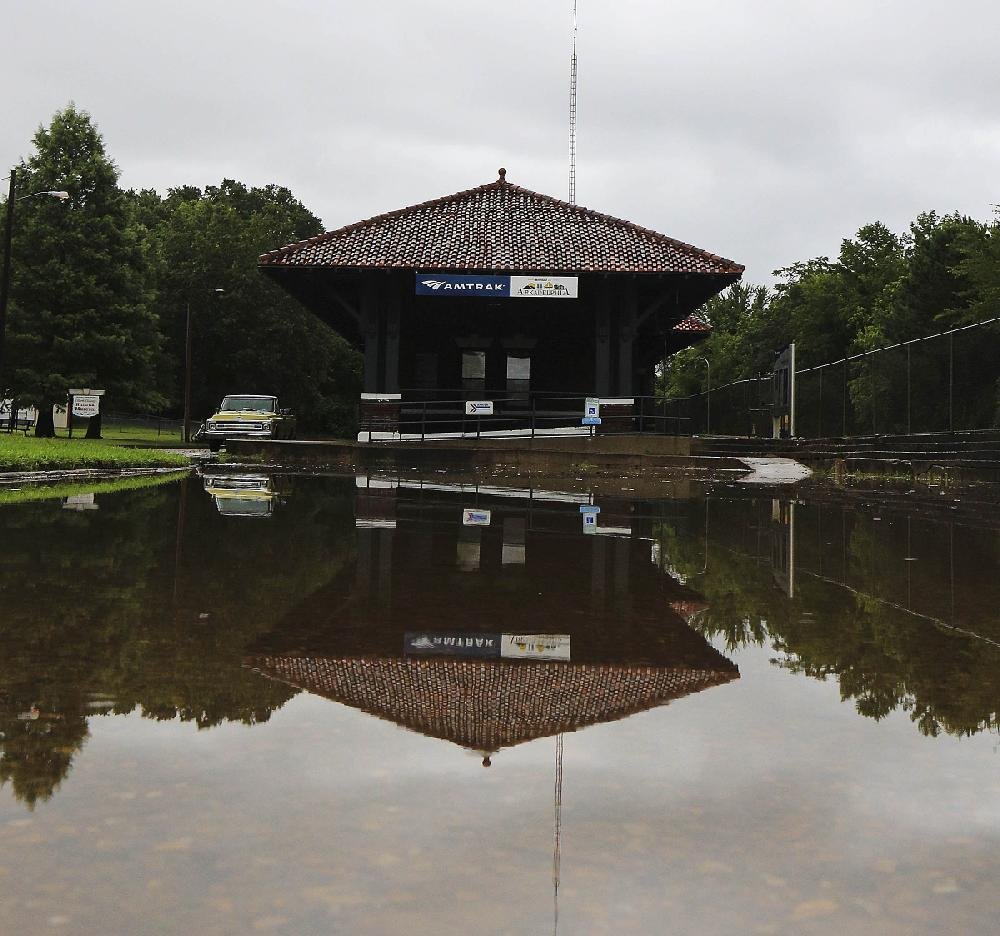 Water covers the road Tuesday in front of the train station in downtown Arkadelphia, where a chaotic scene unfolded as traffic was rerouted from flooded areas, and traffic lights malfunctioned.

Janie Allen, president and administrator of the Humane Society of Clark County, said she woke up about 3:30 a.m. to discover flooding at her property, which is just up the road from the downtown animal shelter.

"We looked down here and saw all the water, and we knew it was going to be bad," she said. "My son, my daughter, and her fiance, we all came running down here."

Allen said they ran through water nearly 3 feet deep to get to the shelter, only to discover water about 2 feet deep inside the building.

"When we went to the dog yard just out back, it was up to my chest," Allen said. "We had to take a plastic dog trough and put the puppies in it to keep them from drowning. We did lose one puppy." 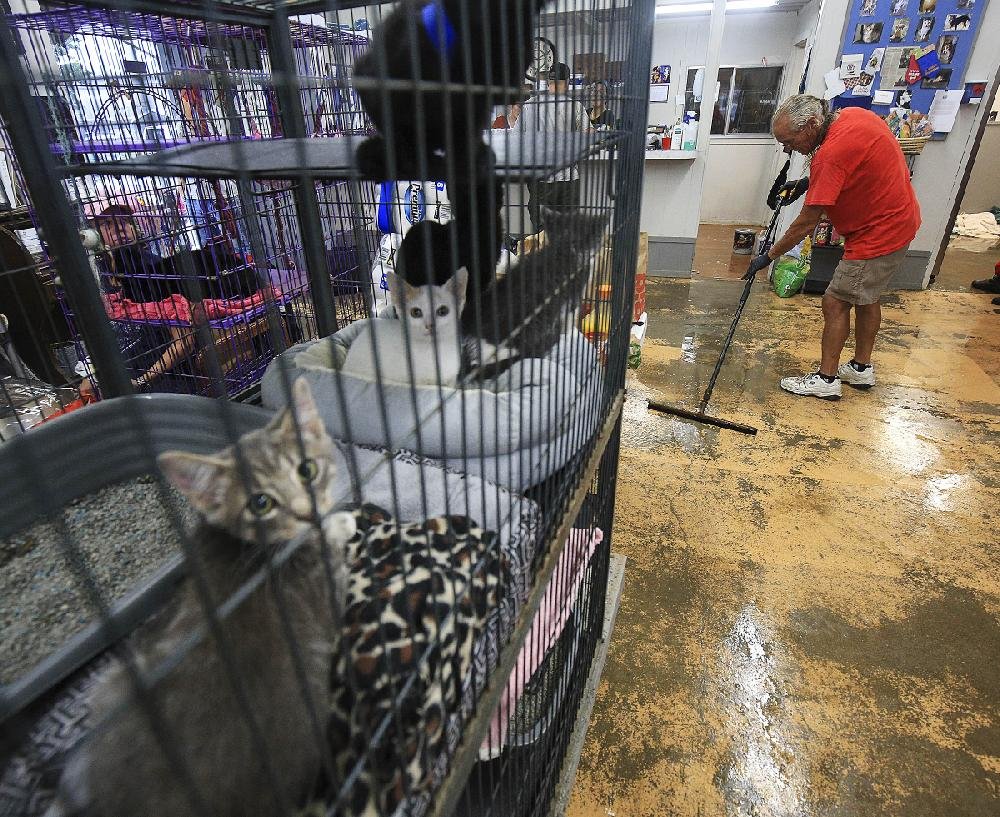 Volunteer Tim Gann of Prescott cleans up Tuesday at the Humane Society of Clark County, where the water reached 2 feet deep after overnight flooding. Janie Allen, head of the shelter, said workers moved fast to save animals that were in danger of drowning. “We did lose one puppy,” Allen said. More photos are available at arkansasonline.com/717flood/

Allen said that kittens were in cages on the floor inside the building, but the three got there in time to take them to higher ground.

"We almost lost some of them, too, but we managed to save them all," she said. "I don't see how we kept any of them from drowning."

Allen said dog food, bedding and other supplies that were stored at floor level had to be discarded.

Caitlyn Lopez, a shelter volunteer, said the shelter housed 72 dogs and more than 100 cats. All of the dogs were sent out to foster homes throughout the area, she said.

"People, families, friends of families, they've all come to take care of the dogs for a couple of weeks," Lopez said. "We'll keep the cats here. We've got them elevated, and this is really the safest option for them right now."

Numerous water rescues and considerable damage to structures were reported in Howard County. 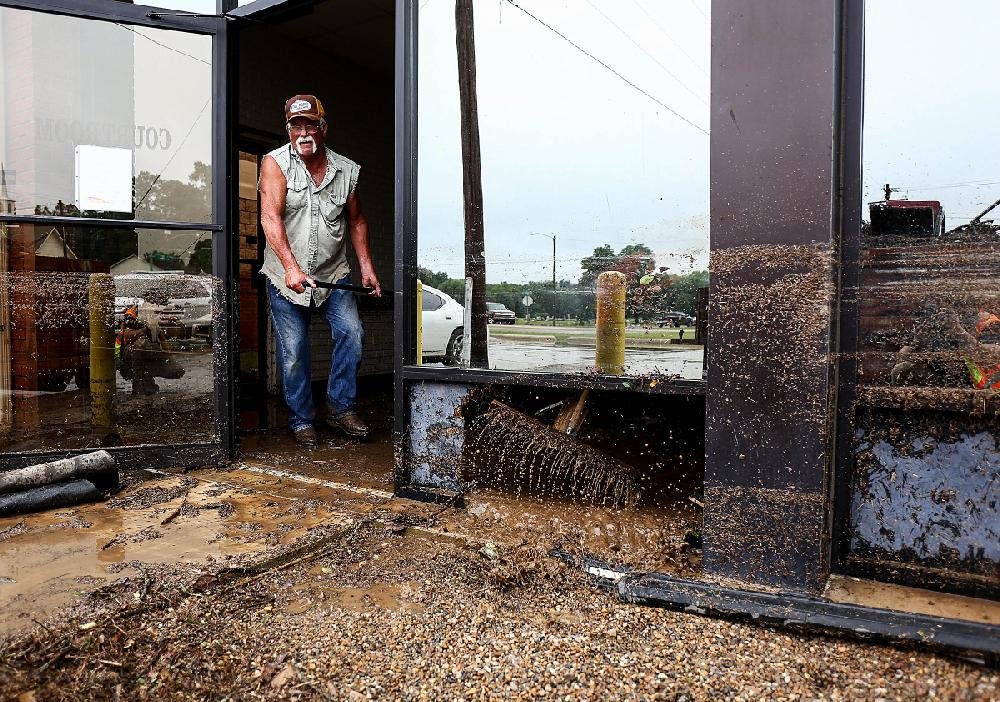 Doug Morris hauls a shovel full of debris out of a flooded courtroom Tuesday in Nashville in Howard County. The water caused damage at the county jail and the Police Department. A Tyson Foods plant was evacuated, officials said.

The county jail and the Nashville Police Department were damaged, officials said. A Tyson Foods plant also was evacuated because of high water, Hager said.

"Water was 4 feet deep in the police station," Jones said. "There were logs, mud and trash and everything else floating by. All of the computers are gone. It's just a mess."

Inmates from the Howard County jail were evacuated Tuesday afternoon. Seven inmates were moved to Department of Correction sites while the rest were bused to the Sevier County jail in De Queen. The Arkansas State Police assisted with the transfer.

As the water went down Tuesday afternoon, Jones and other officials at Nashville City Hall and the Police Department removed soggy, damaged items. 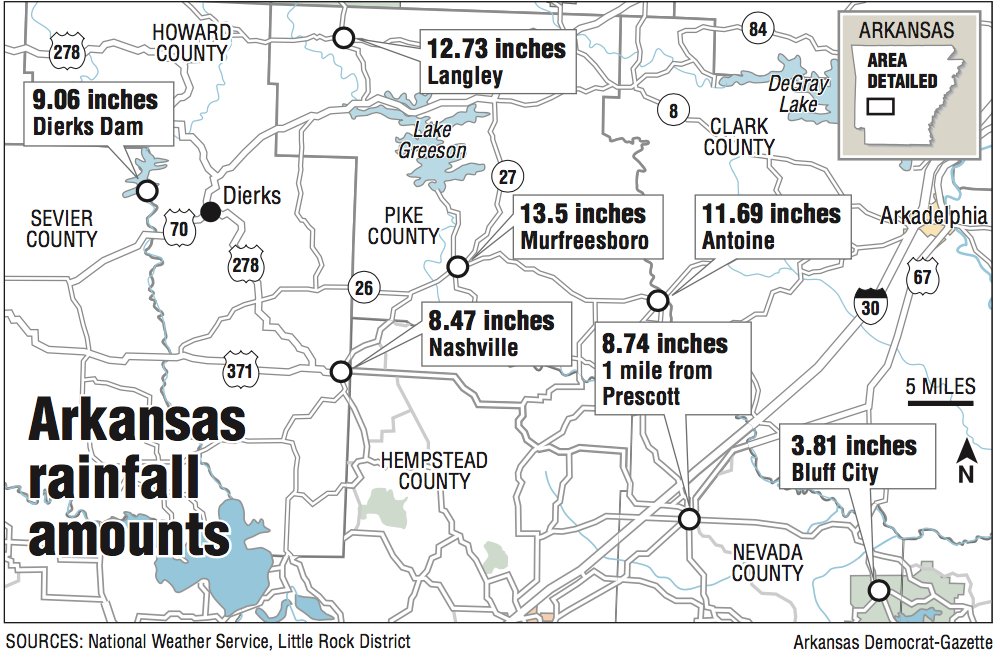 "The problem is you don't shut a police station down," Jones said. "We have got to get them back to work. They can't stay here.

"It's starting to recede. We've just got to figure out how to put it back together."

The National Weather Service said it will continue to monitor the Little Missouri, Antoine and Caddo rivers over the next couple of days for potential flooding.

Previous river flooding and high rainfall totals from earlier this year played a part in the warnings being issued Tuesday, Green said.

"The ground is very saturated right now, meaning the ground can't absorb a lot of water," Green said. "We are seeing the fallout of that."

Information for this article was contributed by Josh Snyder of the Arkansas Democrat-Gazette and by Lori Dunn of the Texarkana Gazette.