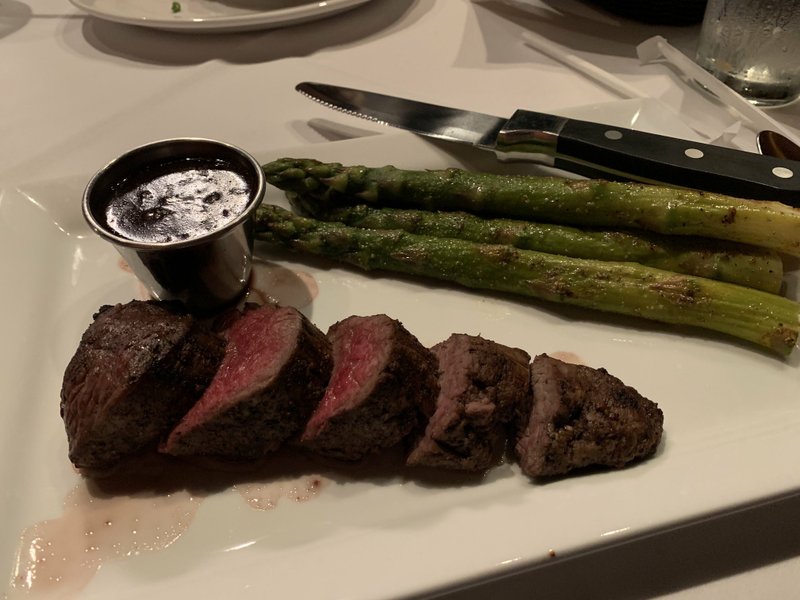 Roasted tenderloin with bordelaise sauce comes with a side of asparagus at Bone's Chophouse in the Village at Rahling Road. Arkansas Democrat-Gazette/Eric E. Harrison

The scenario: A world-class steakhouse — and yes, we mean Arthur's Prime Steakhouse — outgrows its space on Rahling Circle, just off Chenal Parkway in the west of Little Rock, and moves to a bigger, grander location, leaving behind a restaurant space still chock full of atmosphere, including dark hardwood panels and wainscotting and fancy crystal chandeliers.

Wouldn't the best fit for the space be another steakhouse? Voila! Enter Bone's Chophouse, a scion of a successful (since 2017) Hot Springs establishment.

It isn't Arthur's — Arthur's is still Arthur's, now a mile or so east on Chenal Parkway — but it's a worthy successor, serving excellently prepared steaks and a variety of other steakhouse fare at a decent and accessible price. Service is very good. And all that atmosphere, which also includes bright white tablecloths over padded tabletops, is, if you'll pardon the expression, gravy.

Bone's core menu is the same as the original at 3920 Central Ave. in Hot Springs, with a couple of different appetizers and a few different dinner features. Sunday brunch is still a few weeks down the line.

We were a little dazzled by the many appetizer options, all of which looked, well, appetizing. We passed up the very intriguing Filet Mignon Flat Bread ($14), with marinara, filet tips, sauteed onions and peppers, tomato and white Cheddar cheese topped with arugula and Parmesan; the Oysters Rockefeller ($14); the fried green tomatoes with spicy Creole sauce ($8); the sweet garlic chile fried calamari ($10); and, despite the server's declaration that it was half-price that evening, the spinach and artichoke dip (normally $9).

We opted instead for the Ahi Tuna ($12), lightly seared, spiced (an unexpected layer of pepper on top) and sliced and served with a ginger-sesame dipping sauce that was a nice complement and a sort of side salad.

It was easy to taste the lump crab meat in the Crab Stuffed Moonlight Mushrooms ($13), served en casserole in a very rich butter-Romano-Parmesan cheese broth. We hate to say it, but the crab flavor may actually have been a bit strong.

We also enjoyed our French Onion Soup ($6), a rich beef broth thick with onions and bits of crouton, topped with a floating layer of gruyere, not enough to adhere to or overtop the white ceramic soup bowl, but definitely sufficient to give the soup a nice level of flavor.

Bone's proclaims on the menu that its steaks, "Aged Angus. Hand-cut and trimmed in-house," are "broiled to perfection at 1,600 degrees." Steaks and chops come with choice of a Green Market or Caesar Salad ($2 extra if you want their Iceberg Wedge) and one side item.

The Bone's Center Cut Filet (6 ounces, $28, 8 ounces $32) was not quite fork tender, but it was close; it came out medium rare as we ordered it, and "naked" on the plate with just a steak knife and four dabs of balsamic vinegar. There was little or no added seasoning, a good thing — some people really like to taste the steak, not the accent, and there are salt and pepper shakers on the table. But the balsamic vinegar served, in a very limited capacity, as an excellent enhancement to the taste, and if we order this steak again, we'll ask for more of it.

Equally praiseworthy is the Roasted Tenderloin ($26), a slightly smaller portion of meat with a bit more seasoning, also medium rare as we ordered, served sliced with a side of gravy-like bordelaise that we didn't need but was also an excellent complement.

If you're in a seafood mood, Bone's offers a Grilled Faroe Island King Salmon in a soy-maple glaze ($21), a grilled or fried Great Lakes Walleye Fillet ($18), grilled or fried Jumbo Gulf Shrimp ($22) and a Canadian Lobster Tail Dinner (market price).

Intrepid Companion went straight for the Snow Crab Leg Dinner ($29), a full pound of crab legs (why that wouldn't be enough for a normal human being, we don't know, but you have the option of adding a half-pound for $11 or a another full pound for $19). The crab meat, once cracked out of the legs, was tender, and you taste crab, not crab boil.

For our sides ($5 a la carte), we got some of the largest, thickest asparagus of our experience, tender despite its size but with a surprising spice coating; brussels sprouts, which at Bone's are baked, then lightly sauteed in a slightly spicy Asian-style sauce, tasty but a bit too chewy for us; and a baked potato loaded with butter, sour cream, bacon and chives.

Our side Green Market Salad consisted of arugula, mixed lettuce, tomato and red onion in a vibrantly garlicky garlic vinaigrette; the dressing on our Caesar was laid on a bit thick and tasted slightly, well, mayonnaise-y. The house-made croutons could derive from the house garlic ciabatta, which the restaurant serves in a bread basket with its coarse-and-chewy house walnut-raisin bread.

Limited front-lot parking, shared with the Japanese restaurant next-door and a liquor store, was one of the drawbacks of the location for Arthur's, as it is for Bone's. Valet parking makes things easier.