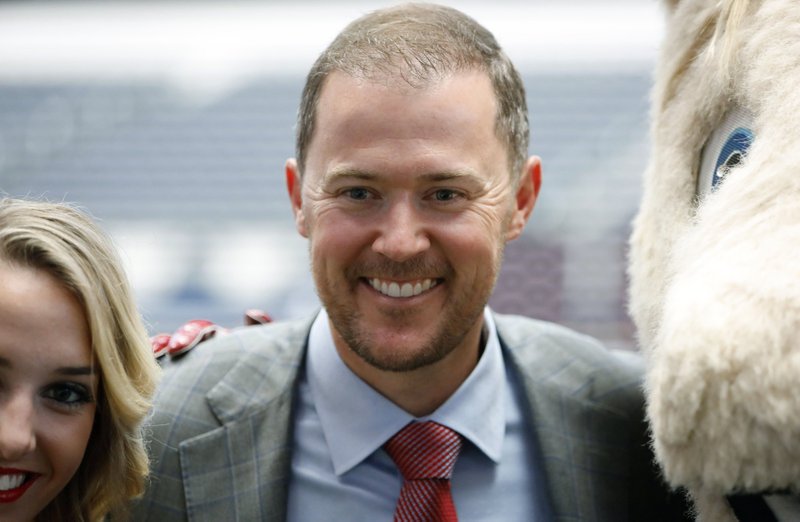 FORT WORTH -- Oklahoma's inability to win a college football playoff game with Baker Mayfield and Kyler Murray as the starting quarterback in consecutive seasons is the single biggest waste in the history of the Big 12.

This includes the Mack Brown recruiting classes at Texas, and multiple great regular seasons of Kansas basketball under Bill Self. Don't worry, Texas A&M, we see you -- you were a crushing disappointment, too.

Why exactly is football convinced Oklahoma Coach Lincoln Riley will be the next to jump to the NFL, and possibly even to the Dallas Cowboys, when his teams couldn't defeat Georgia or Alabama with Heisman Trophy winners at the most important position on the field?

Of course, given the state of the NFL, don't be surprised when Riley is named the next head coach of the Arizona Cardinals.

Before anointing Riley the next Bob Stoops, let us see what he does without "Kyler Mayfield" as his quarterback.

Oklahoma's Godzilla-grip on the Big 12 is over, and life for Lincoln Riley is about to get real real quick. Even the best coaches look a lot dumber when they don't have the players to make them look smart.

"I don't think I ever take it for granted," Riley said Monday. "That's part of the deal with all of the expectations at a place like Oklahoma; you better have a couple of pretty good ones. We've been lucky. We've had some great ones. I've had some phenomenal players. The name of the game is having players. We've been lucky, certainly some of the ones we've had a chance to work with the last few years have been really special. You won't have any more special than those guys."

Now Riley will have to start a kid at quarterback who has only won a national championship. How ever will he survive?

No coach has had an easier transition to a big-time program more than Riley, who has thrived since Stoops ran to retirement only to realize how boring life is without ball. As stated previously, Riley should stay in Norman for as long as he is wanted; he has the greatest of great jobs.

Quarterback Jalen Hurts is, by all accounts, a wonderful young man who will forever have the entire state of Alabama to lean on for a free meal, or hopefully, if he needs it, a job. He is simply not good enough to do for the Sooners what Riley needs.

Hurts is a good player who needs players around him, whereas guys like Baker and Kyler were better than everyone else; Baker and Kyler could make a series, or a game, 1-on-11 and win.

On Day 1 of Big 12 Media Days at Jerry's Night Club, the Sooners did not bring a quarterback to chat with us distinguished, and award-losing, members of the press corps.

"He's gotta earn the job," Riley said of the assumption that Hurts is the starting quarterback.

Hurts is not the starter as of yet, but he will be soon enough. Hurts didn't transfer to Oklahoma to ride the bench again.

"We don't plan on the offense dipping," Riley said. "We definitely expect our defense to be better."

Plan on the offense dipping. Until one of Riley's defenses stop big people in big games, don't plan on it happening.

Because it is Oklahoma, replacing this latest class of NFL-type talent is not a collection of stiffs and losers. The Sooners are going to have players.

But for the first time since Riley took over, he won't have the top pick in the NFL draft playing quarterback.

Losing that type of talent exposes a coach, and now we will see just how good, and smart, Lincoln Riley is.

Is he worthy of replacing Stooper, or is Lincoln Riley merely the next head coach of the Arizona Cardinals?