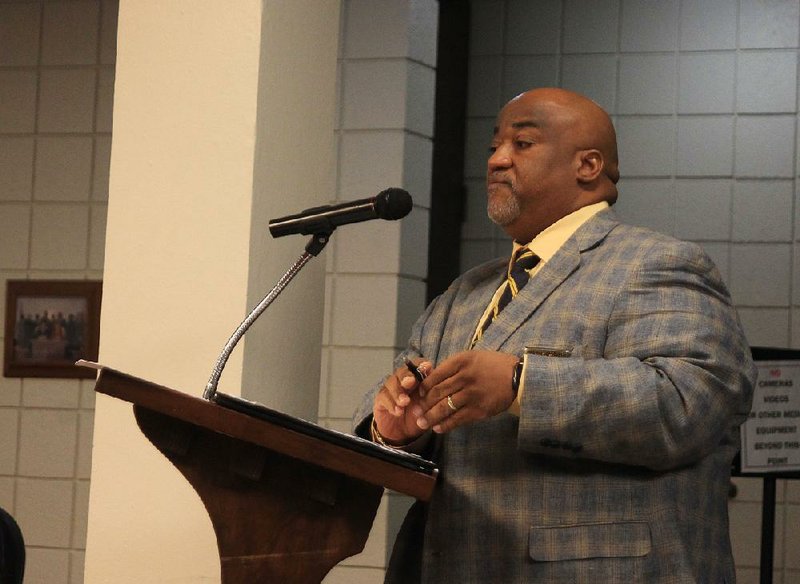 PINE BLUFF -- The Pine Bluff Police Department evacuated the patrol division from its ground-floor headquarters because of mold that developed after a flash flood July 8, officials said Wednesday.

Police Chief Kelvin Sergeant told council members Wednesday that the flash flooding that filled the public-safety complex earlier this month with as much as 3 feet of water left mold buildup on and inside the walls on the ground floor.

"Some of the guys the other day were moving some furniture," Sergeant said, "and they ran into some black mold. So, what we wound up having to do was to vacate the ground floor."

Sergeant said he moved the patrol division to the old National Guard Armory building, which houses the department training facility and support services. He said he moved the service division upstairs in the complex, where it will share offices with the administrative division.

"We talked with a black mold specialist who came and looked at it, and basically told us if he had to do it, we couldn't pay him," Sergeant said. "It would be in the hundreds of thousands of dollars. He said he would give us guidance on how to do it, and once we get everything cut out, he would come in and treat it."

The chief said employees began moving furniture and equipment out of the building Wednesday morning, and they would begin cutting Sheetrock out.

But, he said, fixing the damage will offer only a temporary solution because the first floor of the building housing the public-safety complex sits as much as 3 feet below street level. In heavy rains, he said, water runoff drains into the building faster than the drains can carry it away.

"We really need to sit down in serious conversations about relocating," Sergeant said. "This is a situation that is going to continue to occur, and we're going to have thousands of dollars in equipment losses each time it does."

The complex has flooded three times in the past year, he said.

Shirley Louie, director of the Center for Public Health Practice at the state Health Department, said mold contamination can cause respiratory problems, sometimes serious, for people who are sensitive to it, but she said it is not the deadly pathogen that many people believe it is.

"First of all, you need to stop calling it black mold," Louie said. "It's mold, and mold is going to grow anywhere there's a moisture problem."

As for cleaning it, Louie said the U.S. Centers for Disease Control and Prevention has published guidelines that will help eliminate the contamination.

"But the problem isn't the mold," she said. "It's the moisture intrusion that has created the environment for the mold to grow. You can get rid of every bit of mold that's in that building but without addressing the water problem, in two weeks you're back where you started."

According to the CDC, the mold often found contaminating buildings is Stachybotrys chartarum , a greenish-black mold that can grow on materials such as fiberboard, gypsum board, paper, dust and lint. Growth occurs when there is moisture from water damage, excessive humidity, water leaks, condensation, water infiltration or flooding.

The CDC recommends using a solution of 1 cup of household bleach to 1 gallon of water to kill mold on surfaces, and to wear appropriate protective gear such as eye protection, a N-95 respirator, a long-sleeved shirt, protective gloves, long pants and waterproof boots.