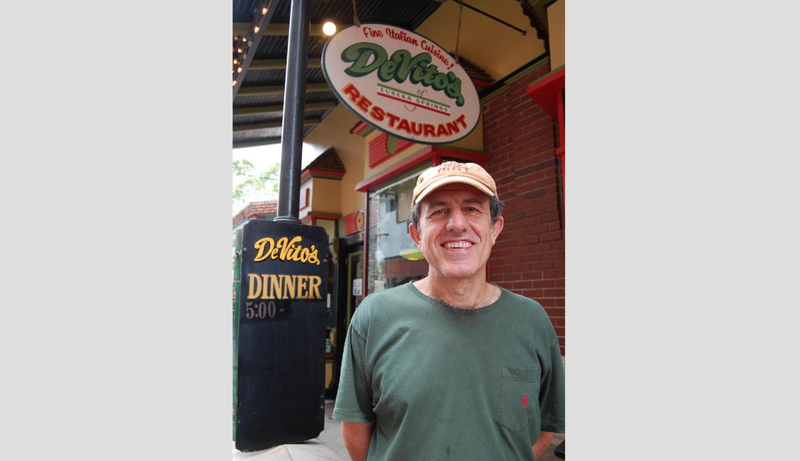 James DeVito is retiring and closing his Eureka Springs restaurant; the last day of business will be Dec. 31. Democrat-Gazette file photo/Bill Bowden

Petit & Keet, 1620 Market St., Little Rock, opened Sunday for its first brunch, which it had been serving at its "daughter house," Watercolor in the Park at the Arkansas Arts Center, until the Arts Center closed at the end of June for a lengthy, two-years-plus renovation.

Jim Keet, the "Keet" of Petit & Keet, says that having partially built the brunch gave him a bit of a head start, though we don't think the place was quite prepared for the opening-day rush of customers: It took about 15 minutes after the doors opened at 11 a.m. to pack the place to the walls, folks with reservations in the main dining room, walk-ins in the bar area and peripheral "walk-through" space.

Some of the dishes had gotten a road-test at Watercolor, including what the P&K menu now lists as Watercolor Chicken & Waffles, fried chicken in a honey-Sriracha glaze paired with a Belgian waffle; others, such as the Tempura Duck Tamales, Churro Waffles in a Nutella cream sauce and the Shrimp & Blintz, firm shrimp topping what the menu describes as a "Gruyere blini" in a Cajun-style barbecue sauce, are new. So is the award-winning Desayuno Burger, a house-made chorizo and Kobe beef patty with bacon, egg, chipotle-lime aioli and pepperjack cheese.

"Iconic" is a not a term to use often, but it's the best word to describe DeVito's of Eureka Springs, 5 Center St., Eureka Springs, which is closing at the end of the year after more than 31 years. "WE'RE RETIRING!" is emblazoned at the top of the website page (devitoseureka.com/hours-reservations). Dec. 31 will be its last day of business; you'll still be able to dine on Italian cuisine and fresh rainbow trout, 5-9 p.m. daily except Wednesday, until then. The phone number is (479) 253-6807. The DeVito family will continue to operate the original location in Harrison — 350 Devito's Loop, phone: (870) 741-8832, website: devitosrestaurant.com) and the Bear Creek Springs Trout Farm.

We reported June 6 on a $150,000 building permit application to the Little Rock Planning & Development Department for major remodeling of the Starbucks at 917 Broadway, Little Rock, specifically for "new bar casework, [to] relocate and install some new bar equipment, install new finishes, fixtures and furniture," and "minor electrical and plumbing work." According to a sign on the door, it's closed until Aug. 14; access to the parking lot is blocked by orange cones and yellow tape and the lot itself is full of trucks.

The door revolves again, or would if there were a door, and for the last time: Taqueria La Pasadita Mexican Cafe is moving out of the ramshackle building at 7706 Cantrell Road, Little Rock, which housed several incarnations of The Hop as well as several other Mexican and non-Mexican restaurants over the past several years. The folks who run it say they're being forced out because the building is about to be torn down. They expect the move to take place in mid-August; they don't yet know where, but it could be to a trailer or a food truck. Until then, the take-out place is serving critically and customer-praised tacos, burritos and other authentic Mexican cuisine, 10 a.m.-8 p.m. Monday-Tuesday and Thursday-Friday, 10 a.m.-6 p.m. Wednesday and Saturday. Keep track via the phone number, (501) 223-9060, or the Facebook page: facebook.com/lapasadita7706.

Co-owner Sam Henson says July 29 is now the target to open HEA Street Eatz and Catering, 6015 Chenonceau Blvd., Suite 180, Little Rock, next-door to NYPD Pizza, pending installation of some plumbing and the subsequent city inspections. Billing itself on Facebook (facebook.com/HEAStreetEatz) as "the happiest little bistro on Earth," the restaurant will offer breakfast, including "breakfast burritos with our signature Colorado style green chili," according to the website, heastreeteatz.com; lunch — soup, salad, sandwich ("prepared with Boar's Head ingredients or any combination thereof") and entree of the day; "and [we] will have chef-prepared meals designed for two that you can pick up and take with you ... prepared by Chef Leah." That's Leah Henson, Sam's wife, but some might know her better as Leah Griffin, which was her name when she took over as executive chef at the Kroger Marketplace on Chenal, where she worked for seven years. Hours will be 6 a.m.-7 p.m. Monday-Saturday. The phone number is (501) 673-4006.

Raiz, an automated kiosk serving salads, bowls, breakfast and snack options "available 24/7," has opened in three central Arkansas locations: in the Regions Building, 400 W. Capitol Ave. in downtown Little Rock; Riverfront Plaza, 1 Allied Drive, in Little Rock's Riverdale neighborhood; and in the Exchange food court at the Little Rock Air Force Base in Jacksonville. Owner Matt Runnells explains that his central Arkansas commercial kitchen sources ingredients "from local farms when in season and [we] make everything from scratch. Our dressings have no preservatives and no added sugar." In a Facebook video (arkansasonline.com/718transitions1/), he explains the operation of the vending kiosk — punch in what you want on the touch-screen menu (which also provides nutritional information and ingredients); choose from six seasonal salads; quinoa, Asian-noodle and pasta bowls; breakfast items including parfaits and "overnight oats"; a selection of locally sourced drinks; desserts; and snacks. Pay with a credit card or via Apple Pay or Google Wallet. Salads, for example, come in a jar; the salad jars include packaged dressings, which you can dispense either in the jar, shaking up the salad to coat the contents with dressing, or you can pour everything into a brown cardboard "boat." Runnells says he's donating all unsold products to area charities. Visit Eatraiz.com.

Also breasting a series of delays, Joel Dunlap says he's looking to open the resurrected Rocky's Pub at the end of July or very early in August in the former Jo Jo's Bar-B-Q, 117 Country Club Road, Sherwood. Meanwhile, he has been experimenting, including on some new desserts, in his home kitchen. The original steak sandwich shop/Italian restaurant/bar in the Indian Hills Shopping Center on John F. Kennedy Boulevard, just on the North Little Rock side of the Sherwood border, closed in January 2014. Operating hours will be 11 a.m.-2 p.m. and 4-9 p.m. Monday-Thursday, 11 a.m.-2 p.m. and 4-10 p.m. Friday-Saturday. Dunlap is currently using his catering number, (501) 732-7400, with plans to switch once he's open to (501) 392-6150. The Facebook page is arkansasonline.com/718transitions2/.

And speaking of lengthy delays, we still don't have an opening date, but we can report progress at the pending 307 Main St., Little Rock, location of A.W. Lin's: The newspaper has come off the windows, making possible a peek into the dining room, which showed tables, chairs and booths in place and three large crates of what appears to be kitchen equipment awaiting installation. The Asian-fusion restaurant's location is in the Promenade at Chenal, 17717 Chenal Parkway; the phone number there is (501) 821-5398.

A list of building permits published in Monday's Hot Springs Sentinel Record shows a July 8 application, for $500, from something called Olde Crow Chili Parlor/Mercantile, 120 Ouachita Ave., seeking a "certificate of occupancy for new owner, assuming an existing business with no change." Turns out that's the location of the apparently now-defunct Craft Beer Cellar Hot Springs, a local franchise of a Belmont, Mass.-based chain/franchise operation. It's no longer listed as a location at arkansasonline.com/718transitions3/; the phone number, (501) 881-7232, has been disconnected. It also turns out it's a new project for Damon Helton, co-owner of Olde Crow General Store, 17202 Arkansas 5, Benton; Helton also holds space at Benton's Main St. Station and operates a Benton-based food truck. A member of the General Store management says the new place, with a target to open late this summer or early fall, will be an "old-school saloon," and will serve soul food, including brown beans, cornbread and, of course, chili.