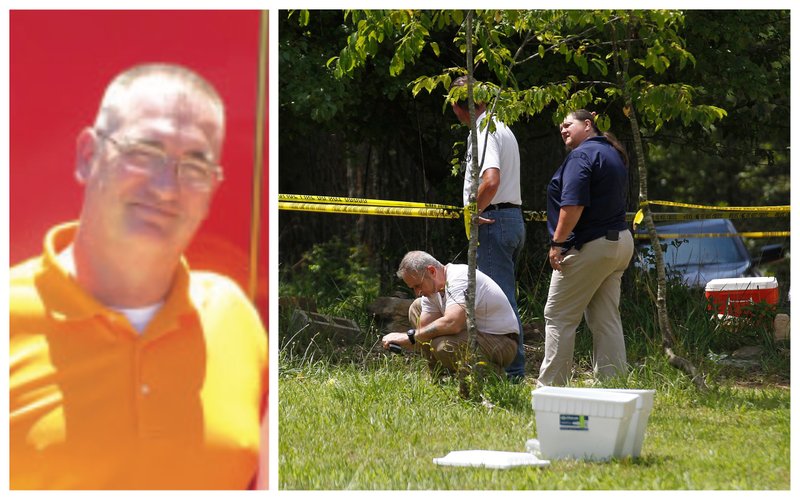 LEFT: Stone County sheriff's office Sgt. Mike Stephen is shown in this 2016 file photo. RIGHT: Police investigate the scene of a shooting that killed Stephen and another person and wounded a woman on Thursday morning in Stone County.

Police are questioning a woman who was injured in a shooting that also killed two people, including an Arkansas sheriff's deputy.

Stone County Sgt. Mike Stephen arrived shortly before 8:40 a.m. He and the suspect were both killed by gunfire and a woman was injured, though additional details about how the shooting played out weren't immediately known. Authorities didn't identify the suspect or the woman.

Bill Sadler, a spokesman for Arkansas State Police, asked for patience while the investigation progresses.

"Rural Arkansas is a challenge sometimes," he said. "But the call came in and the call was answered."

Arkansas State Sen. Missy Irvin, R-Mountain View, said she was notified by a friend in law enforcement Thursday morning that the deputy killed in a Stone County shooting was Sgt. Mike Stephen.

Two people, including the deputy, were killed and a third was injured in the shooting, authorities have said.

Irvin said she was good friends with Stephen.

"I'm shocked by this," she said. "This just doesn't happen. I know people always say that, but Stone County is just such a tight-knit community."

"He was an incredible man," she said. "He was a lifelong law enforcement officer. He was in the Army. He was a volunteer fireman. Everybody loved him."

Irvin said Stephen had come to the state Capitol in Little Rock to testify on issues facing law enforcement.

"It never stopped for him," said Irvin. "It was a lifelong passion 24/7. It didn't stop at the Stone County sheriff's office. He was always trying to protect the community and the people he served. He used his expertise and he just helped everyone he could to make sure the public was protected. He was a wonderful man and a wonderful family man."

Irvin said Stephen lost a son in an automobile accident a year and a half ago.

A Stone County sheriff's deputy is among two people killed in what is believed to be an officer-involved shooting, the Arkansas State Police said. A third person is wounded, authorities said.

The Stone County Office of Emergency Management wrote on Twitter Thursday at 10 a.m that anyone near 2020 Flag Road should stay away from the area because there had been a police shooting with "possibly multiple people down." Minutes later, the same account tweeted out that the scene was secure and that the shooter was down.

The Arkansas State Police confirmed at 11 a.m. that a deputy and another individual were dead and another person was injured in a shooting.

Special Agents of the Arkansas State Police Criminal Investigation Division have been asked to investigate the incident, which occurred in southwest Stone County near the Van Buren County line.

An Arkansas Democrat-Gazette reporter is headed to the scene. Check back for updates.