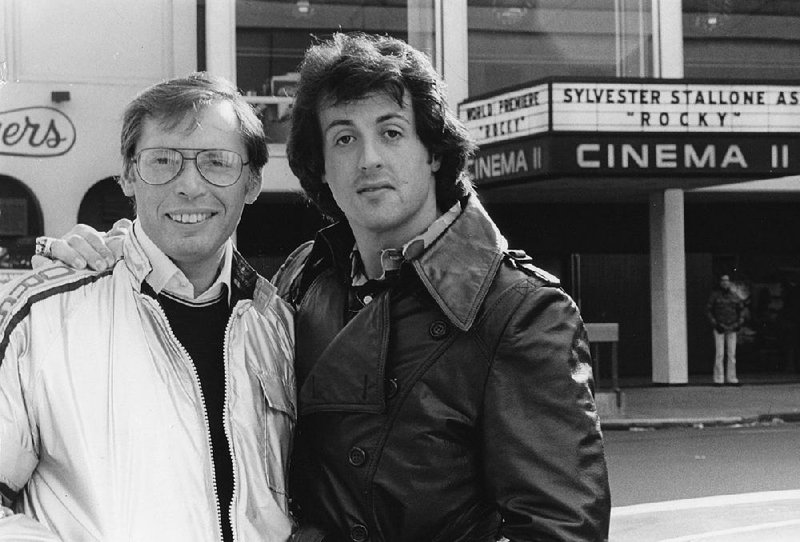 Irwin Winkler (left) saw something in an unemployeed Slyvester Stallone. It paid off when he won an Oscar for Best Picture with Rocky.

In a lot of memoirs, whole forests have died in order to inform the reader how wonderful the author was.

Frank Capra's The Name Above the Title was so self-aggrandizingly inaccurate that the filmmaker's sons Tom and Frank Jr. included Joseph McBride, author of two less flattering books on Capra (Frank Capra: The Catastrophe of Success and Frankly: Unmasking Frank Capra), in their own documentary of the film legend to get the facts right.

Over the phone, he sounds strangely happy about his first job out of college.

"I was the worst agent William Morris (now William Morris Endeavor) had in its long and gloried history, so it didn't take much for me to be better than the agent I was," he says. "I was obviously more suited to be a producer. I really was bad as an agent, really bad. But I didn't know, you see? I got out of college, I got a job at William Morris, I didn't know what an agent did."

Winkler admits he still doesn't always know a hit when he sees one. He remembers advising Ryan Coogler not to take on Black Panther.

That said, Winkler is still producing -- and occasionally writing and directing -- movies at age 88 because he has gotten a lot of things right. In the late 1960s, he teamed with his longtime business partner Robert Chartoff, and the two oversaw the productions of John Boorman's Point Blank, Raging Bull, The Right Stuff, The Gambler and Rocky.

For the last movie on that list, both men received Oscars, and the film has spawned seven sequels (so far). Curiously, the studio that backed the picture, United Artists, lacked the producers' faith in the film's then little-known and unemployed screenwriter and star Sylvester Stallone. Chartoff and Winkler had to put up their own cash to reshoot the ending, and the "homely" leading couple of Stallone and Talia Shire seemed a poor fit for a Hollywood film. Oh, and, spoiler alert, Rocky Balboa doesn't win the climactic fight.

When asked why he and Chartoff stuck with Rocky, Winkler explains, "I never bother with cold shoulders. We believed in Stallone, and we felt he was a really, really interesting actor and an interesting man. We liked the script, and we liked the idea, and we were very stubborn about it. We didn't want to see it go down the drain. We just believed in him and ourselves.

At the end of A Life in Movies, Winkler lists a series of dozens of potential films that have fallen though and remain in development hell. Nonetheless, his IMDB page includes 70 completed projects and three additional Oscar nominations (GoodFellas, Raging Bull and The Right Stuff). Winkler's chapter on the making of Sidney Pollack's They Shoot Horses, Don't They? is an unflinching account how difficulties with actor scheduling and a screenwriter who stubbornly refused to revise his script almost derailed the movie.

"They're all dramatic. Some of them are a little more complicated than the others, but as you can see, I've produced a lot of movies, and I can't remember one that was easy, even when it came to Rocky IV, which was guaranteed. They're all problems because they're so involved as far as actors, financiers, the script. There's so many things that come into play before you get a movie made. There are a lot of opinions, too. In the book, I think I explained how tough it is to make a movie and that's a lot of what people are interested in," Winkler says.

From reading the book, it's obvious another critic I knew was wrong when she quipped about producers like Winkler, "What's the big deal about writing a check?"

Throughout film history, the answer is quite a bit. Producers like David O. Selznick (Gone With the Wind) and Val Lewton had more influence on the final content of the film than the screenwriters or the directors. Selznick later wrote his own scripts and even supervised the editing.

Asked if his book helps correct misperceptions, he says, "I don't know if it's wrong or right. I think it's not known. I just think they're uninformed, but I don't think it's wrong. I don't know of too many people who have an opinion one way or the other. Most people just don't care."

Fresh off the success from the Creed II, a Hollywood mainstay who lives in Los Angeles and consistently works with big studios like Warner Bros. and Columbia, he still manages to come off more like a scrappy independent filmmaker than a studio titan. There's a reason for that.

He produced Martin Scorsese's genre-bending musical New York, New York and directed De-Lovely, a salute to showtune scribe and composer Cole Porter, neither of which qualifies as a typical studio project.

"I don't think we were trying to revive any kind of system because both of those films were made kind of independently," he says. "Although United Artists distributed New York, New York and MGM distributed De-Lovely. I made [De-Lovely] in England all on my own. No studio involvement. No studio interference. I tried to tell a biographical story in a different way. They just put up the check and distributed the film.

"I think that's true of almost every film I've made. I'd probably be considered a traditional studio producer, but in all these years I've been kind of an outsider, and it's helped me a lot."

One reason that Winkler is still marking movies after five decades is because he has shown remarkable adaptability. He and Chartoff started as the old studio system was waning, and Winkler's best known film as a director is The Net, which explored cyber security concerns before they became an everyday worry. His next film, Scorsese's The Irishman, is coming out through Netflix instead of through a more established studio.

"It shows that you have to be very willing to change and to move around and to go with whatever is on the horizon. You've got to catch the future as it's coming towards you," he says.