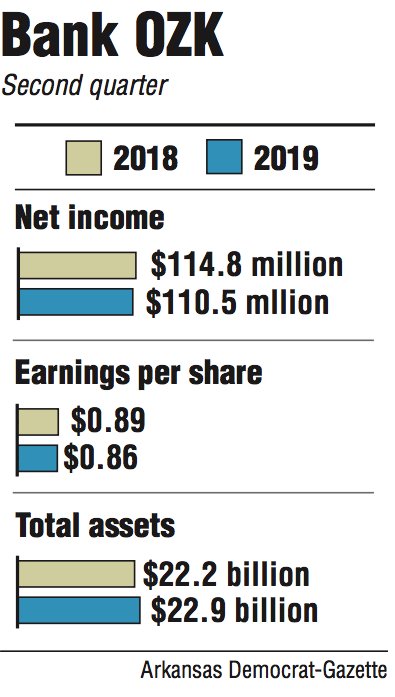 Bank OZK's earnings matched Wall Street estimates, according to a Thomson Reuters consensus of 10 analysts. The bank posted earnings per share of 86 cents, down from 89 cents a year ago.

"Our strong credit culture and consistent discipline have been important ingredients in our long-term success," said George Gleason, Bank OZK's chairman and chief executive officer. "We are pleased that we continue to deliver financial metrics among the best in the industry."

The bank continues to write loans for construction projects in Manhattan. Two of the city's top 10 loans came from Bank OZK in April: $120 million for a tech development center and $95 million for a condo project, the Real Deal, a New York real estate news outlet, reported. The bank is also invested in construction projects in Miami, Los Angeles, Chicago, Denver and Seattle.

For the quarter, the bank had $17.5 million worth of real estate, commercial and consumer loans, its primary source of income. Of the real estate loans, construction and land development was the highest ($6.7 billion) followed by non-farm, nonresidential ($3.9 billion) and multifamily residential ($1.4 billion).

The bank also reported expenses of $99 million, up 11% from last year's $89 million, with almost half going to salaries and employee benefits. Those expenses rose to $47 million in the second quarter, up 14% from $41 million a year ago.

"We will remain disciplined and focused on delivering long-term value for our shareholders," Gleason said in remarks.

Shares of the publicly traded bank rose 49 cents, over 1%, to close Thursday at $28.59. Second-quarter results were released after markets closed.

A conference call with executives and analysts will be held todayat 10 a.m. to discuss the latest results, the bank said. The call is accessible by dialing (844) 818-5110 and asking for the Bank OZK call.