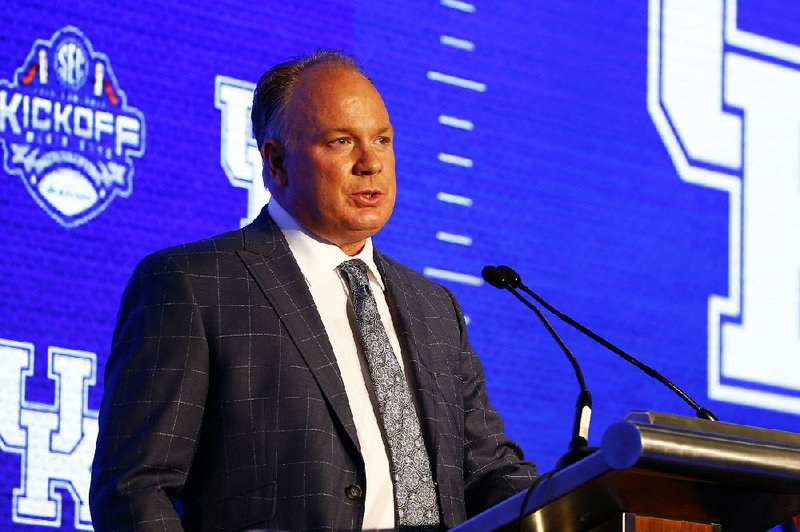 HOOVER, Ala. -- Kentucky Coach Mark Stoops, who was complimented by University of Arkansas Coach Chad Morris on Wednesday, returned the favor on Thursday.

Morris mentioned Stoops and Dan Mullen as SEC coaches who have shown the ability to build their programs into strong contenders after being given time to climb. The Wildcats went 10-3 in Stoops' sixth season last year after going 2-10, 5-7 and 5-7 in his first three years, then having 7-6 records his next two seasons.

Kentucky hosts Arkansas on Oct. 12 at Kroger Field in Lexington, Ky., for the first meeting between the teams since Stoops took the reins at Kentucky.

"You know, it is strange that we hadn't played them until this point, but it will be a real challenge for us," Stoops said. "I have great respect for Coach Morris and what he's done. I know they can move the football. There's no doubt about that.

"You saw them last year against some of the most elite defenses in the country move the ball very, very successfully. I know they didn't have the results in the win-loss column that they wanted, but there's no doubt in my mind you're going to see a big jump by them this year."

[Video not showing up above? Click here to watch » https://www.youtube.com/watch?v=YQDJ5RCMvF4c

Malzahn said Morris will have the Razorbacks winning in time after they went 2-10 last season.

"Chad Morris is one of the best football coaches that I know at any level," Malzahn said. "The thing about Chad, he took over a similar situation at SMU, and you've just got to be patient."

"We do talk often," Malzahn said. "And he's the type of guy that you want to root for. He's a good guy. He does it the right way. So, real excited for him. He'll get that thing going in a short period of time."

Kentucky Coach Mark Stoops was thankful to be asked about the passing of ex-Wildcat quarterback Jared Lorenzen, who gained notoriety and nicknames, such as the "Hefty Lefty" and the "Pillsbury Throw Boy," during his playing days in the early 2000s.

Stoops was asked if the Wildcats were making plans to honor Lorenzen, who died July 3 at the age of 38.

Lorenzen is the Kentucky record holder with 10,354 passing yards from 2000-03 and a 2015 inductee into the Kentucky Athletics Hall of Fame.

"Thank you, that was a tough loss for all of us," Stoops said, when asked if UK was making memorial plans for Lorenzen.

Kentucky quarterback Terry Wilson, who normally wears No. 3, has asked to wear Lorenzen's No. 22 for the season opener.

"Jared was an iconic player around UK," Wildcats lineman Logan Stenberg said. "The Hefty Lefty, everybody knows who that is."

Stoops said the Wildcats are discussing ways to honor Lorenzen this season.

Kentucky Coach Mark Stoops, asked somewhat tongue in cheek by an Arkansas Democrat-Gazette reporter about the possibility of posting a two-game winning streak over Florida, deflected by making an Arkansas reference.

"I got an opportunity to play golf yesterday with John Daly," Stoops said, referencing the Dardanelle native who golfed for the Razorbacks. Stoops said he was in the same foursome with Daly in the PGA Barbasol Championship Pro-Am in Lexington.

Kentucky broke a 31-year losing streak against Florida last season and has not beaten the Gators in back-to-back years since 1976-77.

Stoops said he and Daly discussed the Razorbacks and the game between the teams on Oct. 12.

"He's definitely a big Hog fan, there's no getting around that," Stoops said. "I definitely invited him to the game."

Sankey said Mason once worked as a disc jockey, playing rhythm and Blues and soul music.

"It's nice to have some tangible skills, some transferable skills, if you're out of work," Mason said.

Horton could have another NFL starter in Commodores' senior Ke'Shawn Vaughn, who has made several preseason All-SEC teams after rushing for 1,244 yards.

"Coach Horton is a great coach," Vaughn said. "You go in his office, and all he's got are pictures of all these running backs. When you see a coach that has so much experience with great running backs, you don't want to do nothing but listen.

"So I'm paying attention to everything that he says, even the smallest detail, and making sure I'm coachable."

"There's nobody more excited about Tim Horton than Ke'Shawn Vaughn," Vanderbilt Coach Derek Mason said. "I thought it was special, magical, to see those two work together as we went through spring practice. You could tell, it was teacher to student. You could tell that Ke'Shawn was invested and bought into everything Coach Horton had to say."

Mason said he was excited to add Horton, a two-time all-state running back at Conway, to his staff.

"I'm looking to get great teachers, great guys that can build relationships," Mason said. "That's what Coach Horton brings to the table. "He's been around. He's got lots of experience, but more than that, he loves teaching and he loves building young men."

Auburn Coach Gus Malzahn will be calling plays on offense again this season. Malzahn had turned play-calling duties over to offensive coordinator Chip Lindsey the past two seasons, but he has decided to take back those responsibilities, though new assistant Kenny Dillingham has the offensive coordinator title as well as coaching quarterbacks.

"When I decided to go back and call plays, that's really who I am," Malzahn said. "I'm an offensive guy. That's what got me where I'm at. Through the years, you get advice and all of that. And of course I made a mistake. When Chip left ... just the reality is, 'What now?'

"Just decided to get back to being me and call plays. It's been a very refreshing thing."

Lindsey left Auburn to be the offensive coordinator for Les Miles at Kansas, but then quickly was hired as head coach at Troy.

Malzahn called plays in the Tigers' 63-14 victory over Purdue in the Music City Bowl in Nashville, Tenn.

"I know in the bowl game we played really well, but when I'm back in the swing of things, the day-in and day-out coaching on the field, what happens is the whole team takes on my personality," Malzahn said. "It just feels natural. I wasn't really good at standing back and watching you."