Jobless rate falls in state to 3.5%, lowest on record 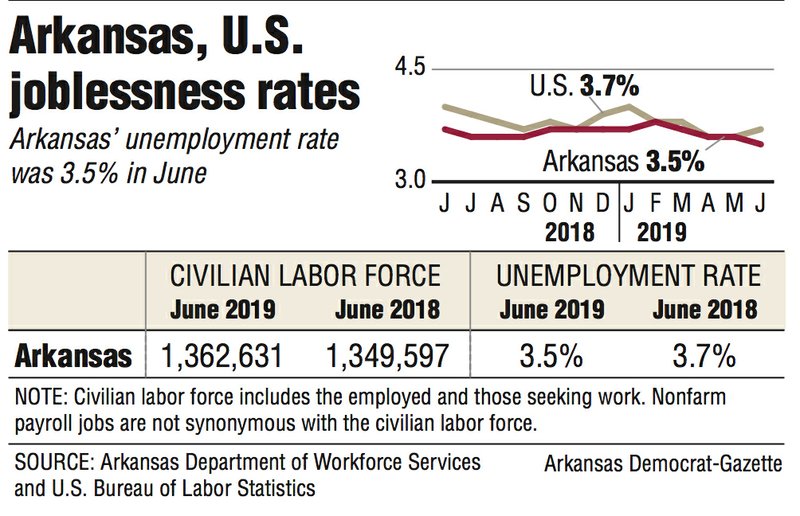 Arkansas' unemployment rate dropped to 3.5% in June, setting a record low as the number of Arkansans working is continuing to reach new highs, according to a report released Friday.

The 3.5% unemployment rate for Arkansas in June was down one-tenth of a percentage point from 3.6% in May and down from 3.7% for the same month last year, according to data from the U.S. Department of Labor released by the Arkansas Department of Workforce Development.

Arkansas' unemployment rate and job growth are keeping pace with the country overall said Michael Pakko, chief economist at the Arkansas Economic Development Institute at the University of Arkansas at Little Rock. He said the numbers show the economy is rolling along steadily.

Vermont reported the lowest unemployment rate in June at 2.1%, while Alaska had the highest rate at 6.4%. Arkansas, as well as Alabama, New Jersey and Texas all set new lows since comparable record keeping began in 1976. Six states saw unemployment decreases, with 44 states and the District of Columbia reporting relatively flat numbers. 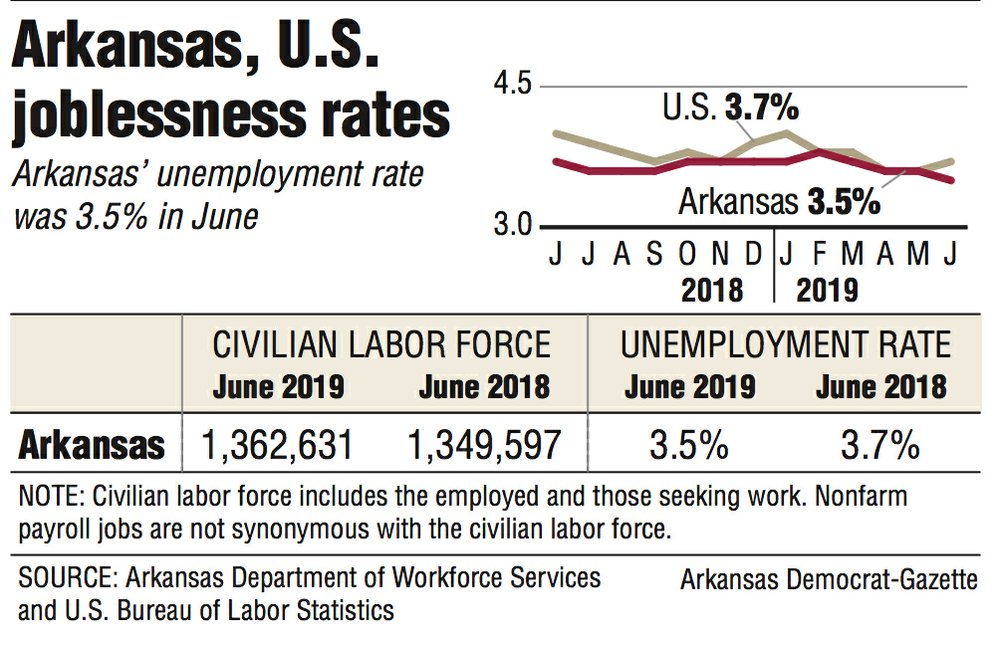 Greg Kaza, executive director of the Arkansas Policy Foundation, said the drop in the state's unemployment rate to a record low is consistent with the duration of the economic expansion, which entered a record 11th year this month.

Nonfarm payroll jobs were down 5,100 to 1,278,000 in June from May, with five sectors showing losses attributed mostly to seasonal changes and six gaining jobs. The government segment lost 6,200 jobs, mostly pegged to summer breaks at schools and universities. A similar decline of 2,600 jobs was seen in education and health services. The largest gain, 3,300 jobs, was seen in leisure and hospitality which typically sees growth in the summer.

When compared with June 2018, nonfarm payroll jobs were up by 19,300, from 1,258,700, a 1.5% increase. Nine sectors saw job gains, with four of those adding at least 2,400 jobs. The leisure and hospitality sector added the most jobs when compared with last year, gaining 5,500 jobs in hotel and food services. Manufacturing added 3,800 jobs and construction 2,900, and trade, transportation and utilities had an increase of 2,400.

Mervin Jebaraj, director of the Center for Business and Economic Research at the University of Arkansas, Fayetteville said he was pleased to see the solid job growth year over year.

"It's pretty stellar and it's well distributed between sectors," he said.

Kaza noted Arkansas manufacturing not only is experiencing strong yearly growth, the sector has added 11,400 jobs since reaching a low in mid-2013, according to the Bureau of Labor Statistics.