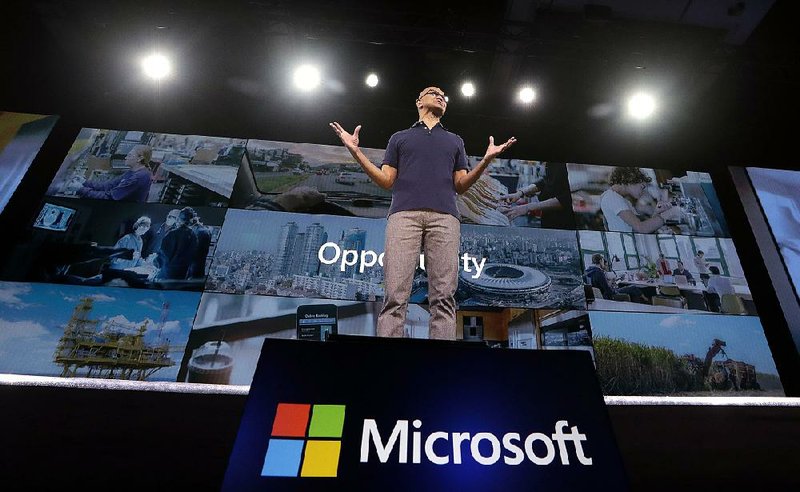 Microsoft chief executive Satya Nadella speaks in May at the company’s software conference in Seattle. Nadella has centered a new strategy on cloud services to compete with market leader Amazon.

Microsoft stock rose briefly to a record Friday after topping quarterly sales and profit projections, fueled by steady demand for cloud-computing services and a surprisingly strong Windows business. The company's forecast promised robust growth will continue into next year.

The software-maker pledged "double-digit" percentage gains in sales and operating income for the year that started July 1. Results are getting a boost from larger deals for its Azure web services and brisk adoption of Internet-based Office programs. Given Microsoft's "strong ambition," it plans to increase operating expenses by 11% to 12% for the fiscal year, and will raise capital spending to build data centers, Chief Financial Officer Amy Hood said.

The shares rose as much as 3.1% Friday before closing up 0.15% at to $136.62. Several analysts raised their price targets for the stock Friday, and Canaccord Genuity described it as "more expensive than it has been since 2000."

Chief Executive Officer Satya Nadella has centered Microsoft's strategy on cloud services, seeking to narrow the gap with market leader Amazon.com. As more customers move storage and computing tasks to remote servers owned by Microsoft and upgrade their aging business software, the company has been leveraging its broad product line by getting them to sign up for both Azure and newer products like Microsoft 365 -- a subscription package of Office 365 cloud software, Windows 10 and security programs.

"Everything has been going well for them," said Sid Parakh, a portfolio manager at Becker Capital Management, which counts Microsoft as its biggest holding. "It's the structural winner right now -- as more and more companies move to the cloud, it's largely Amazon and Microsoft in the running for those deals."

Profit before certain items in the fourth quarter, which ended June 30, rose to $1.37 a share, compared with the $1.22 average forecast of analysts polled by Bloomberg. Revenue increased 12% to $33.7 billion, the Redmond, Wash.-based company said Thursday in a statement, compared with the $32.8 billion projection. Net income in the quarter was $13.2 billion, or $1.71 a share.

The stock has jumped this year on optimism about the company's cloud business, and on some investors' belief that Microsoft is a shelter as U.S. and European regulators sharpen their scrutiny of other large technology firms. The gains have made Microsoft the most-valuable public company, with a market capitalization of more than $1 trillion.

"Microsoft is brimming with confidence in cloud growth on the heels of Azure and Office 365 success," said Dan Ives, an analyst at Wedbush Securities. "The Street will be loudly applauding this forecast."

In the fourth quarter, commercial cloud revenue -- a measure of sales from Azure, Internet-based versions of Office software and some smaller products -- rose 39% from a year earlier to $11 billion. Profit margins in the business widened by 6 points to 65%.

Sales of Office 365 software to businesses jumped 31%. Azure cloud sales rose 64%, compared with 73% growth in the previous quarter and 76% in the one before that. That continued deceleration has caused some concern among investors -- Azure revenue was routinely more than doubling as recently as two years ago. Still, swelling profit margins in cloud have helped to offset those worries. Margins will continue to widen in the new fiscal year, Hood said on a conference call.

Since the close of the quarter, Microsoft signed new cloud deals with Providence St. Joseph Health and ServiceNow Inc., which said it will use Azure to deliver cloud products to some government customers -- the first time that company has used third-party data centers for its business.

Worldwide public-cloud services sales are expected to grow 17.5% this year to $214.3 billion, according to Gartner Inc. In the infrastructure part of the market, Amazon and Microsoft are increasingly pulling away from other competitors -- although Azure remains several times smaller than Amazon Web Services. Meanwhile, Microsoft's Office cloud business puts it in the lead in the area of Web-based applications.

Revenue in the company's productivity and business unit, which includes the Office suite of programs like Word, Excel and PowerPoint, rose 14% in the quarter to $11 billion, exceeding analysts' average estimate of $10.7 billion. Sales from the Intelligent Cloud division, made up of Azure and server software, jumped 19% to $11.4 billion -- the first quarter the unit has been Microsoft's biggest by revenue.

Global shipments of personal computers increased 1.5% in the June quarter, Gartner said last week, fueled by businesses upgrading to the latest Windows operating system. Support for Windows 7 is ending in January, meaning companies need to upgrade to Windows 10. The older software's expiration is also helping boost sales of the Microsoft 365 bundle as the company persuades customers to switch to Internet-based subscriptions rather than one-time licenses.

Sales of Windows to PC-makers in the quarter were better than expected, rising 9% overall and 18% for the pricier professional editions, Microsoft said, far outpacing the overall PC market. Four points of the growth in Pro revenue was also because PC makers are stocking up ahead of tariffs related to a U.S.-China trade war, said Mike Spencer, Microsoft general manager for investor relations, in an interview. Other than that, Microsoft hasn't seen any notable impact from U.S.-China trade tensions.

Microsoft's net income benefited from a $2.6 billion tax gain, which came as the company moved intellectual property to the U.S. to comply with the 2017 Tax Cuts and Jobs Act. While the gain is being recognized up front in the recent quarter, the company will face a higher tax rate in coming quarters, Spencer said.