Center on the Square to present Gypsy 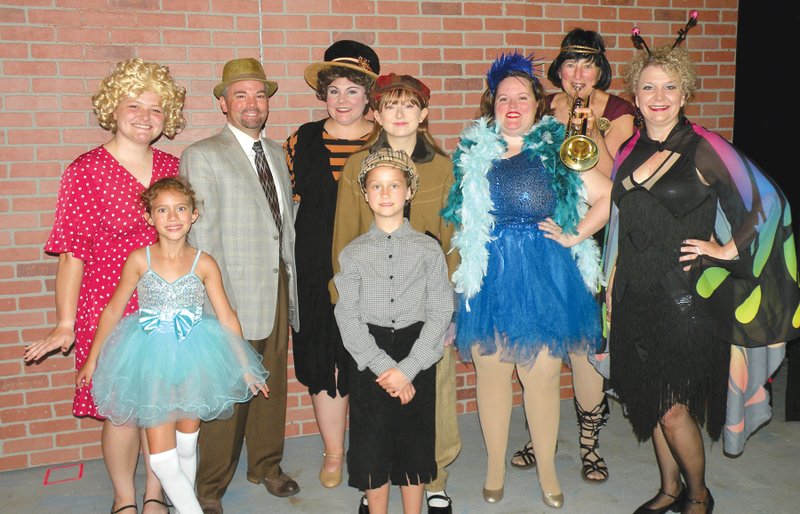 Center on the Square will present Gypsy: A Musical Fable on Friday through Aug 11. Among those appearing in the show are, front, from left, Lilly Grace Moore, left, as Baby June and Kimberly Ham as Baby Louise; and back, from left, Lauren Smith as Dainty June, James Horton as Herbie, Montana Wallace as Mama Rose, Shelby Foster as Louise, Cassie Bennett as Miss Electra, Sally Paine as Mazeppa and Becky Boaz as Tessie Tura.

SEARCY — Center on the Square will kick off its 2019-2020 season with Gypsy: A Musical Fable, directed by Carla Fuller. The show will open Friday and continue through Aug. 11 at 219 W. Arch St.

Gypsy is based on the book by Arthur Laurents, with music by Jule Syne and lyrics by Stephen Sondheim, and suggested by memoirs of Gypsy Rose Lee. The original production was by David Merrick and Leland Hayward and was originally directed and choreographed by Jerome Robbins. The local production is presented by arrangement with Tams-Witmark, a Concord Theatricals Company, www.tamswitmark.com.

“Gypsy is an adult show with some adult themes,” Fuller said. “It will be most appreciated by ages 13 and up.

Fuller said the cast features approximately 25 people from Searcy and nearby communities.

“Some are kids, some are mature, and there are some in between. We even have a real live dog,” she said, laughing.

“This is the first time I’ve directed a show with a real dog in the cast. This is my 15th show to direct,” said Fuller, who practices family law in Searcy.

“And interestingly enough, I am making this my last one to direct. I have been planning for this to be the last one, so it’s OK. I love directing,” she said, noting that she has also acted in a few of the local productions.

“I love the subtle nuances of directing … the little tiny details that allow the actor to convey the story … to show the audience that it’s more than just a story … a stage and props,” she said. “It’s the actors’ facial expressions, their emotions, that make the story come alive.”

Fuller said the cast “is amazing.”

“We have a whole lot of veterans and a few new people,” she said.

“We opened Center on the Square in 1999,” said Fuller, who is a member and past chairman of the board of directors. “We became a nonprofit in 2004, and I’ve been involved since then … served as the first board chairman. We moved to this location in 2012.”

A native of Oklahoma, Fuller said she came to Searcy in 1982 to attend Harding University. She graduated in 1986 with a degree in English and attended the University of Arkansas School of Law in Fayetteville, graduating with her law degree in 1989. She returned to Searcy in 1992.

“Searcy is my home,” she said.

The principal characters in Gypsy include the following:

• Montana Wallace plays Rose, the ultimate stage mother who lives her life vicariously through her two daughters, June and Louise.

“Montana has been involved with Center on the Square for some time … since we first offered the KidStage classes in 2000,” Fuller said. “I am so glad to have her back onstage. … She sings and dances … and is a really good actress. She directed Our Town last year.”

• James Horton appears as Herbie, the agent for Rose’s children and Rose’s boyfriend.

“I’ve been trying to get this man in a play for nine years,” Fuller said, laughing. “He was in one once. … He played a dead man. He’s a great singer.”

“These two young girls have both been in MainStage productions, as well as KidStage shows,” Fuller said.

• Lauren Smith plays Dainty June (Baby June as a teenager), and Shelby Foster appears as Louise (Baby Louise as a teenager, who grows up to be Gypsy Rose Lee).

“These young ladies have theater experience, too,” Fuller said.

“Lauren appeared in the MainStage production of The Drowsy Chaperone,” Fuller said.

“This is the second show he has done with us,” Fuller said. “Dillan was previously in Our Town. Since then, he has grown into a handsome kid who can sing and dance and act.”

Fuller said a trio of veteran actors are sure to be the “showstopper” in the musical.

The Gimmick Girls are as follows:

• Becky Boaz will appear as Tessie Tura, once a ballerina and now a burlesque dancer who shares her dressing room with Louise. Boaz teaches apparel merchandising at Harding University.

• Sally Paine will appear as Mazeppa, a burlesque dancer who dresses as a gladiator and plays trumpet. Paine is executive director at the Sunshine School in Searcy.

• Cassie Bennett will play Miss Electra, a burlesque dancer whose costume is wired with lights. Bennett is an administrative assistant in the theater department at Harding University.

Other members of the cast include the following:

• Dillan McGlothlin portrays the driver of a touring car.

• McKinnon Streit and Christian Baker appear as Boy Scouts seen along the roadside and kidnapped by Rose to be put in her vaudeville troupe.

• Audrey Hughes plays an urchin, a roadside kid who tap-dances and is kidnapped by Rose for her vaudeville troupe.

• Jason Parks is Yonkers, Amanda Rice is L.A., and Alisa Kindsfater is Angie, all members of Rose’s vaudeville troupe.

• Jon Bucher plays Mr. Kringelein, the manager of a hotel.

• Bella Anderson appears as Agnes, Savannah Brown as Delores, Mallory Jones as Marjorie May, Alisa Kindsfater as Thelma and Amanda Rice as Gail, all members of the Hollywood Blondes singing and dancing ensemble.